In the fighting hundreds of Maidan ripen split 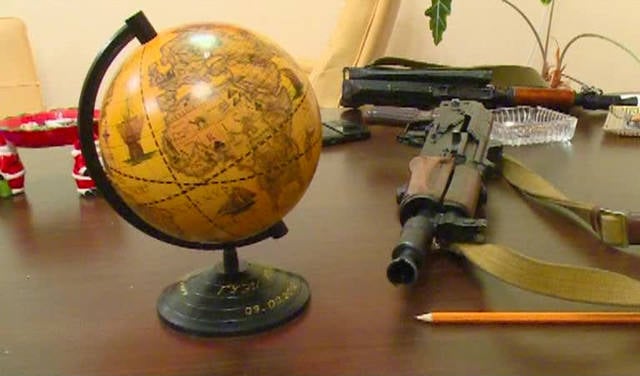 At midnight, the Ukrainian Central Election Commission officially completed the reception of documents for presidential candidates. Twenty-four people are going to fight for this post. The odious leader of the Right Sector, Dmitry Yarosh, also joined the presidential race. However, most politicians began to distance themselves from the radicals. Criticism in their address sounds already from Europe. And among those who entered the hundreds of fighting Maidan, ripening is ripening. Many ordinary fighters of the revolution now consider themselves devotees. And they are preparing for new confrontations - perhaps, already with their recent colleagues. Our special correspondent was able to visit the city administration of Kiev, closed to Russian journalists, where armed fighters of Maidan’s hundreds are quartered.

There are more than forty announcements on the stand - revolutionaries missing. Most of the photos appeared here after the February events. This is indicative - "Edward was taken away on March 5 in an unknown direction on a white Toyota. Since then, there is no connection with the lad." So usually the self-defense fighters disappear - victims of the war between their former colleagues.

Activists of the radical organization say that a certain militant nicknamed the Bear, such as the commander of the eleventh hundred Maidan, on the orders of Yarosh arranges sweeps in the ranks of nationalists who refuse to obey the leader of the "Right Sector". At gunpoint, a group of Rostislav Yakubyk, a centurion from Ternopil, the headquarters of the twelfth hundred occupies the entire sixth floor of the building of the Kiev city state administration. Our filming crew climbs the Kubik along the dirty corridors, as the commander calls his own. On the walls are graffiti - UPA, portraits of the murdered Alexander Muzychko. He was popular here, now he became a hero of armed nationalists. The administrative building is turned into an outpost. Each floor is controlled by an independent group, often hundreds do not get along with each other.

The commander of the twelfth hundred greets us with two machine guns in his hands. The clips are in the pocket in the building. weapon do not charge. In the office of Rostislav Yakubik the flag of the Ukrainian insurgent army and under the flag - Sashko Bily. Yakubik from the doorway: the Minister of the Interior is the main enemy of the revolution.
“A criminal case against Avakov for the murder of this man, Alexander Muzychko, he should be in prison for the murder of this man. Who will be next? I or you are journalists?” The leader of the militants asks symbolically.

The fighters of this hundred turned out not to be needed by either the new government or their old friends. They no longer provide food, stopped funding, the group now exists autonomously.

“Only the church helps us with food - not the government, not the state. Only the church. When the Maidan was, we were heroes,” Yakubik complains of the injustice of the authorities.

"Twelfth hundred" - only the name. Under the command of the Cube a thousand bayonets, weapons and ammunition enough. Automatic machines - everything that, in fact, gave these militants a revolution. They are not going to go home before the election.

"Here, I officially declare, I have a lot of weapons, ammunition is stored separately, I am not afraid," the extremist says.

Separate scores with centurion Yakubik to Dmitry Yarosh. The leader of the "Right Sector" is now, in fact, the enemy number two.

- How do you treat Yarosh? - Question Yakubiku.

- He is nobody to me. Traitor, so you can just say.

- Well, normal people will call, ask - maybe what is needed, how to help. And then just a threat from them. Or call and offer a million hryvnia, so I passed KMDA. But I did not come here for work. I can and need the money, I have a sickness, and I have children. But I'm not here to make money. I came here, and I will stand here until the end. And from here they will carry me only forward with their feet. This is my position, "- says Yakubik.
And this is not the most radical-minded group, which is based in the building of the Kiev administration. But even the twelfth hundred is ready to continue the fight.

"Our government has not changed, the names have changed, now Avakov .... The gang was like that, and keeps up," the fighter believes.
By the way, the centurion Yakubik did not serve in the army, but he has an idea about discipline.

“I was in prison for breaking the Russian flag,” the radical is proud.

The centurion is going to the street, puts on a bulletproof vest, arming himself. For more than a month, they have not officially fired in Kiev, but almost every night there are sounds that are difficult to confuse at Maidan, in the Bessarabka region. These cases are not included in the reports. In the midst of the presidential race, new-old politicians seem not to notice those militants who were the main weapon of the coup.

Ctrl Enter
Noticed oshЫbku Highlight text and press. Ctrl + Enter
We are
A compilation of photographs of the Victory Parade 9 May 2015 of the year in GomelStrategy and tactics of the "Right Sector"
Military Reviewin Yandex News
Military Reviewin Google News
123 comments
Information
Dear reader, to leave comments on the publication, you must sign in.