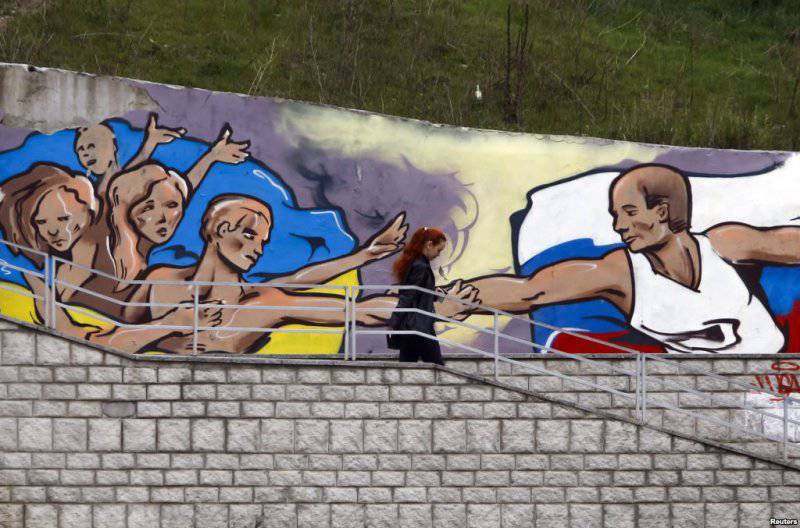 Good day! Today I would like to talk about the situation that has developed among the masses. On a sharp patriotic rise.

After the annexation of the Crimea, everyone started talking about a turning point in stories. On the singular point of the beginning of the development of Russia. Some call it “collecting imperial lands”, others “restoration of the Soviet Union.” But I would advise to be more careful about such statements. I came to the conclusion: do we not overestimate this bright national takeoff, initiated by the sensational plebiscite? Quite often in history, and in life, we strongly hope for something, but this does not bring the expected result. This fact is marked by psychologists, people can simply re-fantasize.

One of the calls - talk around Alaska. How long have everyone wanted her back! Perhaps even from the sale itself, which, by the way, recently had an anniversary (March 30, 1867, the signing of the treaty in Washington). Sometimes, and now especially often, in social networks, speaking of Alaska, people do not even think about the very reason for selling. For that matter, you can remember about the whole of Russian America, and with it, in addition, the Elizabethan fortress (Hawaii). And also all Russian settlements on other continents.

Dear readers, well, do not go to extremes! Yes, the annexation of the Crimea is a major event, but it is not worth strongly idealizing everything. Of course, I hope that all this will serve as a catalyst for shifts in the development of the country, but everything will not be as fast and dramatic as it seems. Speaking of the notorious sanctions that threaten to introduce ... To deny the fact that without cooperation with the United States and the European Union we will have a hard time, ridiculous. Although we will get an impetus to the development of national industry, it would be as though our unprepared economy did not bend under such a burden. In addition, this confrontation is reduced mainly to the political squabbling and struggle of oligarchs, monopolists. All this without the hatred of the people themselves, the peoples. Although propaganda is doing its job, both for them and for us, this also should not be denied. There are many great people among Americans and Europeans, some of them are my acquaintances.

This is my reasoning about what is happening "metaphysical" jump self-consciousness. I ask you, after weighing all the pro and contra, soberly assess the situation.

Ctrl Enter
Noticed oshЫbku Highlight text and press. Ctrl + Enter
We are
About Stalin and KhrushchevWhat you didn't want to know about England
Military Reviewin Yandex News
Military Reviewin Google News
55 comments
Information
Dear reader, to leave comments on the publication, you must sign in.