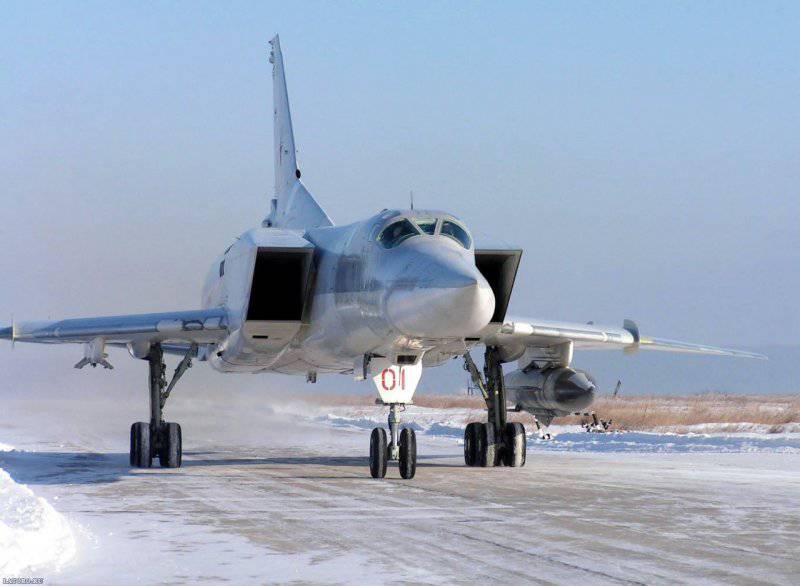 After the entry of Crimea into Russia and the partial stabilization of the situation in relations with the West (it is already clear that the probability of real isolation of the Russian Federation is scanty), the information field is increasingly news about the meaning and future of the new subject of the Federation.

The news about the deployment of the Tu-22M3 missile carrier regiment at the air base in Guards (Crimea) was very interesting. The rest Aviation on the peninsula will be updated and modernized, including Su-27 fighters, anti-submarine Tu-142 and Il-38, as well as Ka-27 and Ka-29 helicopters. All this should happen by 2016. But nevertheless, it is the placement of long-range Tu-22M3 bombers that is of key importance, therefore it is necessary to analyze the change in the military balance in the region and in Europe as a whole that will occur after the deployment of aircraft in the Guards.

First of all, you need to understand the capabilities of the Tu-22М3, which is called Backfire by the NATO nomenclature. This modification of the bomber is operated from 1983 year. The Tu-22М3 was created as part of the concept of a multi-mode aircraft and is equipped with a variable sweep wing - at low speeds and during takeoff, the wing is almost straight, and in supersonic sweep reaches 65 degrees. This allows you to use the aircraft in a very wide range of speeds and altitudes.

The radius of combat action of the Tu-22М3 is approximately 2400 km. The bomber is equipped with a powerful electronic and navigation system. The automatic on-board control system is actively involved in the control of the aircraft, greatly simplifying the life of the pilots. The main armament for the Tu-22М3 are cruise missiles X-22, with a launch range of up to 500 km and flight speed up to 4000 km / h (can be equipped with nuclear warheads and strike ships) and missiles X-15, with a range up to 250 km and speeds up to 6000 km / h (can also carry thermonuclear weapon). In development is the X-32 rocket, which, presumably, will be able to hit targets at distances up to 1000 km with great accuracy. By 2020, 30 Tu-22М3 must be upgraded to version Tu-22М3М and will be armed with these very rockets. It can be assumed that exactly updated aircraft will be deployed in Crimea.

As you can see, the combat radius of the Tu-22М3, plus the flight range of the cruise missile, is enough to fully cover the entire territory of Western Europe, including Britain. A bomber can fly to Eastern European countries even at constant supersonic speeds. All this is another possible serious blow to the American missile defense system in Europe. Recall that in response to the deployment of the European missile defense system, the RF promises to deploy the Iskander-M missile system, with a range of actions, depending on the rocket used, from 500 to 2000 km. A missile launched from such a complex flies using various maneuvers, therefore it is practically invulnerable to air defense and missile defense systems.

The combination of the Tu-22М3 and Iskander-M completely devalues ​​the elements of the American missile defense system, which in the 2018-2020 year will begin to be deployed in Poland and Romania. The leadership of these countries should think twice - does it make sense to become a target because of simple anti-Russian sentiments? Should not follow the example of the Czech Republic and refuse to participate in the program?

Other areas in which the capabilities of the Russian Federation are being strengthened are the Black Sea region, the Balkans and the Middle East. The Black Sea, and so shot by a large number of coastal anti-ship missiles, will now also be under the control of the most powerful bombers with cruise missiles, which makes the destruction of Turkish, or any other active in the Black Sea, fleet quite a simple task. In addition, in case of great need, this potential of the Russian Crimea can be applied in probable "hot" spots in the Middle East - including Syria and Iran.

As a result, we can say that the decision taken by the leadership of the Russian Federation on the deployment of the Tu-22М3 in Crimea significantly enhances the capabilities of the Russian armed forces in the key regions at the moment. In this sense, Russia's acquisition of its native "unsinkable aircraft carrier" is priceless. Such a move by Vladimir Putin, not yet adequately assessed by the Western media, is a far more serious sanction than blocking the accounts of several Russian businessmen or politicians.

Ctrl Enter
Noticed oshЫbku Highlight text and press. Ctrl + Enter
We are
Supplies of China Tu-22М3 bombers are unlikelyRussia can deliver a preemptive strike on the EuroMD system
Military Reviewin Yandex News
Military Reviewin Google News
264 comments
Information
Dear reader, to leave comments on the publication, you must sign in.