The nuclear secrets of the deceased Muzychko 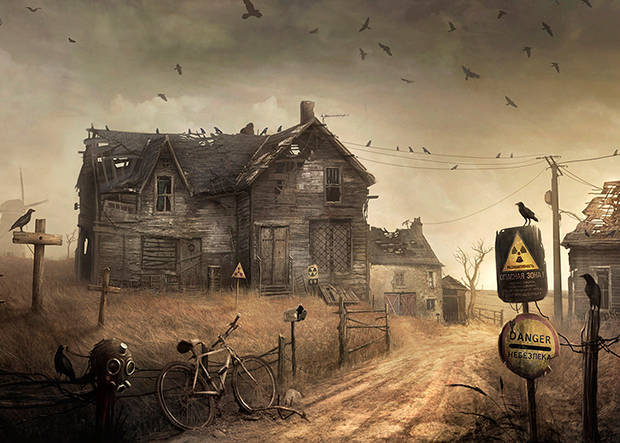 Two key events of recent days related to Ukraine shed light on the nuclear activities of the new Kiev rulers. Firstly, Sashko Bily, who is also Alexander Muzychko, was shot dead. This man, as it is supposed, turned out to be an unwitting participant in a dubious plan for the disposal of Western nuclear waste in Ukraine, supervised by Tymoshenko and her satellites. So far, they have buried one Bilogo, who, quite possibly, was a victim of his own bravado and, apparently, did not want to turn his homeland into an atomic garbage bin. Secondly, the 25 of March in The Hague ended the nuclear security summit, during which many backstage talks related to Ukraine.

According to the newspaper "The Kiev Times" from 29 March, buried Sasha Bilogo in Rivne. Dmitry Yarosh, the leader of the Right Sector arrived at the funeral. And he came to the armored GMC at the cost of almost a million dollars. By the way, earlier this machine belonged to Yanukovych Jr., which made it possible for one Facebook user to write in a comment: “Yes, manners, manners ... And why so small? Immediately on the plane flew. With golden bowls and loaves. Well, with gold machines. And as usual, all roads would be blocked - you have the right. Revolutionaries ... In general, everything is clear with you, guys. Thank God that so quickly everything fell into place. ”

A trip to a funeral in an armored car means nothing more than fear. Now Yarosh is also afraid - just as Mr. Muzychko was afraid of the imperious and near power of his enemies, who walked everywhere with a machine gun.

The “Right Sector” on Facebook confirmed the guesses of eyewitnesses to the arrival of Yarosh. The response of the organization’s activists to the residents of Rivne is given by the same “The Kiev Times”: “Sorry, but the Right Sector had to buy cars ?! Yes, and carry Yarosh in an unarmored car - this is criminal negligence. Somehow I don’t really want to be at his funeral anytime soon. ”

30 March became known version of the death of Muzichko, more than others, similar to the truth. User LJ false_maidan told about how the dead A. Muzychko was suddenly a hero of a dark political thriller.

As the author points out, light on the events that preceded the tragic death of Muzychko was thrown by his trusted people in the “Right Sector” (no names, everyone is really scared, we note in brackets. This is not irony).

The reason for the hunt for Muzychko is very simple and prosaic - big money. It is necessary to clarify: not the money itself, but information about such, that is, about the transaction. And about nuclear.

Comrade false_maidan reminds that Yatsenyuk said more than once: Ukraine will have to accept any demands of creditors in order to receive foreign financial assistance. It is curious that the negotiations of “Batkivschyna” about this very financial assistance have been conducted since the end of 2013, under the current president, Yanukovych. (It is clear from this that the West was actively developing its own scenarios, but Yanukovych did not participate in them.)

Now the details of the December agreements of the West and Ukraine have surfaced. It turns out that in the West they pushed through the decision, according to which Ukraine should have taken on obligations to dispose of nuclear waste from the European Union and the United States. In order for the plan to be implemented, it was supposed that Mrs. Tymoshenko would come to power (we recall that earlier the West called for the release of a “political prisoner” very actively). Kiev chose the exclusion zone of the Chernobyl nuclear power plant, which Yushchenko wanted to use for disposing of spent nuclear fuel, as the main waste disposal site.

The initiative plan “Batkivshchyna” decided to give life to the old plan. The West would generously thank those who are inclined to have add. revenues.

Part of the money could be spent on "gray" schemes, the author writes notes in the "Learn". No one will check the actual number of nuclear dumps.

Scheme included in the same December. The well-known American Agency for International Development (USAID) acted as a “conductor” of financial resources. Circle admitted to the cash currency: Yatsenyuk and Turchinov, who acted for the benefit of the long-suffering homeland under the patronage of Tymoshenko. Narrow list soon filled up with his persona and Avakov. The author continues: December 9 in the office of "Batkivschiny" conducted a search of the SBU, seized almost 17 million dollars. But such a trifle seriously could not disturb anyone. In addition, then Yanukovych fled, and this circumstance could not fail to take advantage. Tymoshenko was free. Yatsenyuk became and. about. premiere, Turchinov - and. about. the president. And here Avakov - in the role and. about. Minister of the Interior.

On the eve of the May elections, as the author of the article suggests, Tymoshenko decided not to sign official documents with Yatsenyuk and Turchinov, but to hold a “gray” burial. Therefore, the involvement of official Ukrainian structures was excluded. The force escort of the cargo, which should have been delivered from Poland to Chernobyl, was entrusted by Tymoshenko to the “Right Sector”. For a lot of money. For what, not reported. Yarosh, in turn, delegated duties to his subordinate - Muzychko. After all, his people were responsible for the Ukrainian West.

It seems that the unfortunate Sashko understood that everything is not so simple. And he began to walk everywhere with a gun. And he promised to hang Avakov as a dog. Kiev new "government" was suddenly on the hook of the latter-day carrier compromising. (Hence, apparently, this bravado Muzychko, well, and fear too. And speaking on the Internet is also from here.)

Trying to hedge, the author writes notes, Sasha made a video message and said that he was going to either destroy or capture and extradite to Russia. Strengthening the guard, he dedicated a few close people to the cause of his anxieties.

Further in the LJ, it is told that Tymoshenko gave the command to Avakov, and he conducted a special arrest operation. And handcuffed Sashko "accidentally shot himself."

As for the train with nuclear waste, it already stands on the Polish-Ukrainian border ...

The situation with the storage and disposal of nuclear waste in Ukraine is the saddest thing.

As noted by Victor Bourbaki ("Fund of Strategic Culture"), representatives from 58 countries and international organizations took part in the Nuclear Security Summit in The Hague. It is curious that an emergency meeting of the leaders of the G-7 countries took place on the margins of the summit, moreover on the initiative of the American president. The situation in Ukraine was discussed. But not safety ...

Meanwhile, as the analyst notes, "the situation in Ukraine is evolving towards the growth of threats in the field of nuclear safety." The author quotes the Ukrainian media: “In Ukraine, the issue of storage and disposal of radioactive waste and spent nuclear fuel is still not completely resolved ... Today, 100% of spent fuel is stored in fuel storage pools next to reactors and in temporary storage facilities. But the capacity of such storage facilities is limited, and they do not fully comply with safety requirements ... In Ukraine, about 4500 tons of heavy metal accumulated in the form of spent fuel from WWER and RBMK. This fuel contains about 12 tons of plutonium (enough to produce 1000 nuclear weapons. - Approx. B. Burbaki), requiring special treatment and representing a very serious danger. There are no modern repositories for spent nuclear fuel (SNF) in Ukraine; therefore, the situation in the field of work with SNF can be characterized as critical. ”

Not surprisingly, we add from our own that some of the current rulers of Ukraine considered a small "plus" in the form of a Polish train to be a trifle.

The analyst notes that recently American-made nuclear fuel was brought to the country. This was done "under the guise of raising the level of energy independence of Ukraine." However, this fuel is more expensive than Russian-made fuel by 40% and has a lower planned power output. Finally, after using this fuel in reactors, the Americans will not take it back. But the Americans preferred not to discuss the problem of nuclear safety of Ukraine.

Yes, and with what a fright, it should be noted, they should be worried about the nuclear security of Ukraine, located near Russia? To create chaos in both Ukraine and Russia is the “Marshall Plan” by B.H. Obama. Yes, and waste somewhere to do. So it turned out finally, why Obama and the European Union have their own people in the Ukrainian government. Of half the country, the West is ready to make one continuous Chernobyl.

“And the problem remains. It consists in the fact that a concentration of potential radiological weapons, such as temporary storage of spent nuclear fuel, takes place on the territory of Ukraine. Under the conditions of the “national revolution” development, these storages can turn into a “doomsday machine” any day, which will work not only against Russia, but also against the whole of Europe. How much more can you ignore?

And they notice. Moreover, this concentration is the goal of the current Western temporary workers who do not know how to think long and strategically. Yes, and can not. Such rulers of the wizard only shift the burden of problems on the shoulders of the following governments and future generations. Hence, the endless capitalist crisis, and the fooled consumer society, created only to enable corporations to increase profits annually, and the terrible plastic dumps on the planet, and the huge public debts characteristic of any Western country, and absurd American statements about "exclusivity" sounding from a politician who is not trusted by his own people.

Presumably, the United States and the EU started a “peaceful” nuclear war against Ukraine, whose sovereignty the West values, and at the same time against Russia. Americans and Europeans throw off and easily buy those who need "money for the revolution."

Citizens of Ukraine! Remember that Mikhail Gorbachev prefers to celebrate birthdays in Germany. This man managed to drive through almost the entire gold reserves of the USSR, made major external debts and laid the foundation for the collapse of the socialist economy, for which he was awarded the Nobel Peace Prize. Think about your choices about where and what your new rulers will celebrate in the near future!

Observed and commented on Oleg Chuvakin
- especially for topwar.ru
Ctrl Enter
Noticed oshЫbku Highlight text and press. Ctrl + Enter
We are
Tank biathlon in the DNI endedResults of the week. “I saw a lot of psychos, but this place is a reserve”
Military Reviewin Yandex News
Military Reviewin Google News
117 comments
Information
Dear reader, to leave comments on the publication, you must sign in.