Ukrainians pulled tanks on the lasso to the Bryansk border, one caught fire 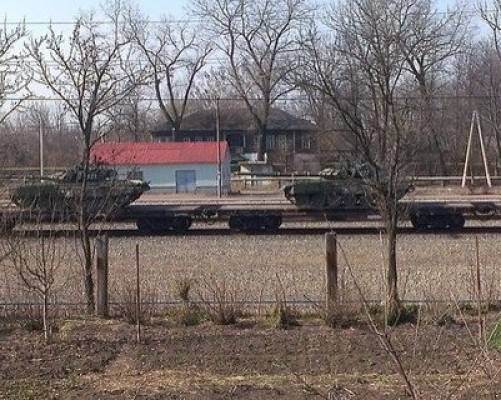 Tragicomic paintings can now be seen near the Bryansk section of the Russian-Ukrainian border, near the New Yurkovichi checkpoint. The Ukrainian military is pushing here Tanks, and some drag on ropes.

- Ukrainians are "annealed", as much as ridiculous. Delivered here five tanks. And three of them pulled the other two - apparently, did not start. They dug them, everything seems to be normal, but in the end one caught fire.

“We don’t have exact information about what is happening,” said Denis. - But, as we understand, everything is going to strengthen the border. Part of the equipment sent to the "Three Sisters". In Klimov, many military men appeared, trainloads came. But none of the townspeople knows the details. They tried to speak with the soldiers, but they did not even say a word. Novozybkov is also full of military personnel, before this was not. They are here only for the second day and while they are just unloading. They say that the Ukrainians, too, strengthen the border. Local residents terribly worried about all this turmoil. Nobody explains anything, because people are worried from the unknown. Tymoshenko, Yatsenyuk and others with their fucking "Right Sector" until the end of the collapse of the already already routed country, they are trying to embroil the people in a meaningless war. It is worth thinking. How many statements were there that the Ukrainians achieved freedom, independence, that they would live in Europe, unlike “quilted jackets and slaves”, that NATO would help, but in fact the country was impoverished and forced to beg from the whole world. So I was in Ukraine this summer with my grandmother. She was simply amazed: she is a hero of labor, but her pension is worthless.

Ctrl Enter
Noticed oshЫbku Highlight text and press. Ctrl + Enter
We are
Reports from the militia of New Russia for 7 September 2014 of the yearBTR-3 armored personnel carriers and manufacturer's news
Military Reviewin Yandex News
Military Reviewin Google News
206 comments
Information
Dear reader, to leave comments on the publication, you must sign in.