Palestinian militants have received at the disposal of the Kornet ATGM 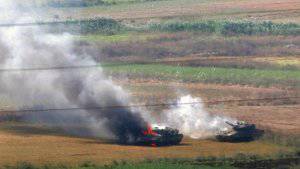 For the first time December 6 became known to the Palestinian militants about the use of the Russian anti-tank complex Kornet (ATGW). It was on this day that the Palestinians were the first to succeed in smashing an Israeli Merkava-3 tank. The Israeli side acknowledged this fact, as stated by Gabi Ashkenazi, the chief of the General Staff of Israel. He made his statement during the working meeting of the Israeli Parliamentary Commission on Foreign Affairs and Defense. In particular, Ashkenazi said: "This is a heavy rocket, which is one of the most dangerous, previously used in our region."

According to a senior Israeli military, the Cornet rocket pierced the armor tank Merkava-3, which patrolled an electronic fence established along the border with the turbulent Gaza Strip. The crew of the armored car was saved only by the fact that, for an unknown reason, the Kornet rocket did not explode. However, according to Israeli sources, the tank was hit.

"Cornet" - a representative of a completely new generation of ATGM and is designed to effectively defeat modern armored vehicles, including tanks, equipped with dynamic protection. Also, these complexes with considerable probability can serve to destroy enemy personnel, including those under the protection of complex fortifications. In addition, it has the ability to hit low-speed aircraft and surface targets, regardless of the time of day and the complexity of the surrounding meteorological conditions. In recognition of the military, "Cornet" is resistant not only to passive, but also active optical interference. He also has a number of other advantages - the work of the operator is simplified through the use of new technologies, convenient for transportation. All the components suggest that the "Cornet" is quite effective. weapon. That was proven during combat use.

According to unconfirmed data, for the first time the Cornet complex was used in combat conditions of the Second Lebanon War in 2006. Israel officially acknowledged defeat in the indicated conflict of 46 tanks, of which 3 were destroyed. The representative of Hezbollah indicates other data: according to them, she managed to knock out an 164 tank. The number of wrecked tanks using the “Cornet” remains unknown. But among the wrecked tanks were modern “Merkavy-4”, which until that moment were considered invulnerable. It should be noted that the Israeli military justified such heavy losses by the fact that it was Hornbullah’s Cornet.
The Israelis noted that the appearance of Kornets among the Lebanese militants was a very unpleasant surprise. It is indicated that Hezbollah "Cornets" put Syria. Although Russia supplied the complexes not only to this country, but also to Morocco, Eritrea, Algeria, Libya, Peru, and Turkey.

The military-technical cooperation established between Russia and Syria provokes an extremely disapproving reaction in Israel. Several “Kornets” captured by Israeli special forces in 2006 were exhibited among other trophies in the building of the General Staff of the state, and the fact that they were among the militants caused undisguised fury among the Israeli leadership. And far from the last role in why Israel actively supplied arms to Georgia, according to Israeli politicians, was the further development of military-technical cooperation between Moscow and Damascus.

Given the fact that the militants have such powerful weapons as the Kornet complexes, the Israeli military has begun to develop plans for conducting operations to ensure the security of their mechanized units. On the eve of the “Cast Lead” military operation, the IDF leadership did not rule out the possibility that the situation similar to Lebanon’s 2006 would recur in the Gaza Strip and urged their subordinates not to enter into open confrontation without first establishing that the enemy had a Cornet complex. As you know, at that time the fears of the Israeli military command turned out to be in vain, but already the 6 of December 2010 of the year the Palestinians showed that they now have at their disposal a weapon against which Israel’s tanks are powerless.
Ctrl Enter
Noticed oshЫbku Highlight text and press. Ctrl + Enter
Military Reviewin Yandex News
Military Reviewin Yandex Zen
32 comments
Ad