Kazakhstan has begun to "indigenization" 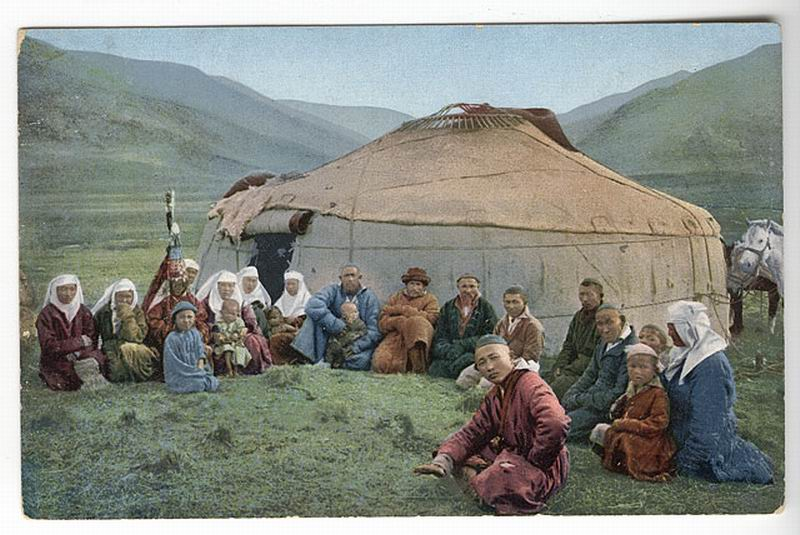 The events in Ukraine, and especially in the Crimea, unexpectedly reminded the country's leadership of the existence of Russians and the fact that these Russians also have serious problems associated with the violation of their rights. During the campaign for the return of the peninsula, all our leaders vied with each other about the need to protect Russians and Russian-speaking people around the world. They talked about the fact that this is a sacred duty and an important mission of the Russian state and society agreed with the authorities on this topic. But the world outlined by them, for some reason surprisingly exactly coincided with the borders of revolutionary Ukraine, and yet, among the Russians of Central Asia, about which our leadership stubbornly remains silent in a rag, there are also very serious problems. And a new round of such “ethnic problems” will soon begin in the closest ally and partner of the Russian Federation - in Kazakhstan.

Apparently, Kazakhstan closely followed the Ukrainian events, and decided not to allow the “Crimean scenario” on its territory.

The leadership of Kazakhstan has decided to dramatically increase the Kazakh population of the north of the country. While we are talking about the resettlement of thousands of Kazakhs 300 Kazakhs from the south of the country in the northern regions. Well, help the Kazakhs in this regard, China. And it will help not only with investment projects, but also with additional labor. And not from somewhere, but from the Xinjiang Uygur Autonomous Region and precisely from those areas that are inhabited by the Kazakhs and the Uighurs. So, China, it seems, can send to Kazakhstan its own Kazakhs and Uighurs, who live in this autonomous region.

According to the agreement, Kazakhstan will give China the right to lease and use land, and China will take over all the issues related to the financing and provision of necessary equipment. And all the products that will be produced thanks to this contract will be sold in the Kazakh and Chinese markets.

But the economic component of this decision is not as interesting for our country as its national component. But we are talking about the beginning of replacement migration and the “indigenization” of Northern Kazakhstan.

At the moment, Russians make up 23,7% of the population of Kazakhstan, or 3 million 869 thousand people. Moreover, they live very compactly in the north of Kazakhstan, in the region whose historical the name is Southern Siberia and which was given by the Bolsheviks of the Kazakh SSR formed by them. If you look at the ethnic map of this country, you can easily make sure that these regions have a very distant relationship with Kazakhstan and more like a piece cut off from Russia, because the share of the Russian population is very significant. And judging by the statements of the Kazakh leadership, they decided to correct this "misunderstanding" by changing the ethnic composition of the region.

In general, with regard to ethnic enclaves, there are four main strategies of state behavior: first, this is full recognition of the rights of national minorities and securing them a compact territory with rights of autonomy or even a national republic. The second is the policy of assimilation and gradual dissolution of the foreign culture population in the array of the titular nation of the country. The third is extrusion, which in radical forms assumes the character of mass exile and genocide. Well, the fourth tactic, which China has actively used and continues to use, is the replacement migration of the representatives of the titular nation to the territory of national minorities.

And, apparently, Kazakhstan decided to follow the Chinese route, starting to stimulate Kazakh migration to the Russian north of the country. Of course, the demographic potential of the Kazakhs is much lower than the Chinese and they are physically unable, like the Hans, to completely change the ethnic map of the region for a couple of years, becoming an absolute national majority in it. But still they chose this path. The path of the forced “indigenization” of the historically Russian regions.

Of course, the Chinese Uygurs and Kazakhs will also help them in this, but still their number will not be enough. This means that in addition to the simple settlement, they will have to use other methods. For example - the gradual squeezing of the Russian population, as it is already actively being done in the south of this country, from where the main stream of Russian immigrants to Russia is now coming.

Of course, Kazakhstan is not Tajikistan, where the policy of the real genocide was pursued against the Russian population. The Kazakhs have other methods - discrimination and extrusion. And now a substitute migration has been added to them. So in a short time we can well expect a significant increase in Russian refugees from this country. 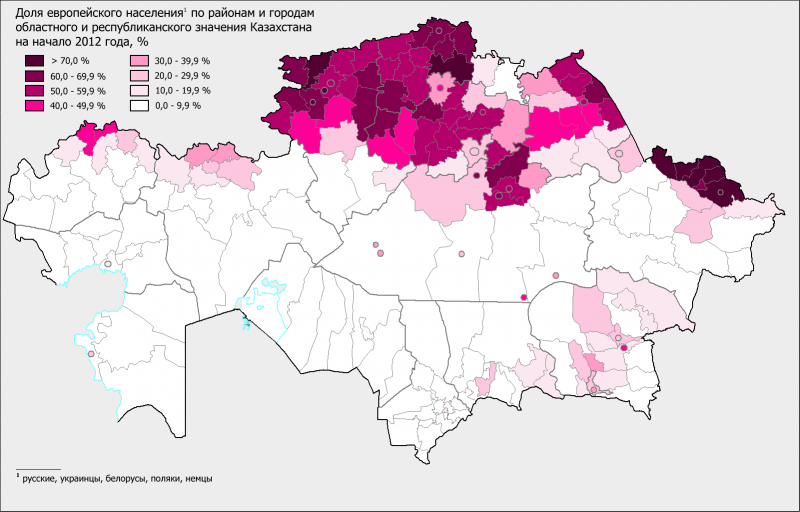 Senator Svetlana Dzhalmagambetova proposed to resettle southerners in the northern regions of Kazakhstan, the correspondent of UN Tengrinews.kz.

According to the deputy, per capita financing, which is introduced in Kazakhstan, "puts the northern regions of Kazakhstan on its knees." She raised this problem during the consideration of the draft republican budget for 2014-2016 years in the Senate of Parliament.

"I just have the impression that in the north or it is necessary to close all the villages and say, or let's move people from south to north. Or do some coefficients in the north. Because we just stay with the whiskers, the distances huge between settlements. If there is no school in the village, if there is no settlement in the village, no post will be - no one will live there. The President moved the capital to have a population here. But everyone is around Astana, and no one wants to live there. "- She said.

I fully agree with the proposal to relocate the Kazakhs from south to north. In Northern Kazakhstan, auls are closed every year in bundles. They close up primarily because there are no children in the schools. The school is closing - that's all, it means that the village is automatically closed. 20 teachers are left without work, people are breaking down from their homes and settling down in the suburbs, in shacks, abandoned summer houses, sitting without work. The part goes to crime-theft, robbery, robbery, etc. and etc. However, in the south of terrible overcrowding. If you throw a cry and each family of immigrants provide an empty house in the village and a couple of cows and a dozen sheep, you can forget about the notion of an unpromising settlement and save our crib, our villages ...

Askar UMAROV, Chairman of the Board of Trustees of the KazBussinesMedia Foundation:

It was proposed to resettle the population from South Kazakhstan to the north of the country. Very correct and practical solution. Moreover, spontaneous and uncontrolled resettlement is already underway. On the basis of economic and political tasks it is necessary to give consistency to this process. We have an almost ethnically homogeneous, overpopulated south and a sparsely populated ethnically diverse north. Any demographer will tell you in this the risks to the country. But I do not agree with the fact that migrants from the south need to fill auls. Let me explain why: more than 40 percent of the population of Kazakhstan live and work in auls. The process of the evolution of agriculture, the increase in people's demands for their standard of living, their comfort and security, forces people to move to cities in search of work, in search of a better life. Urbanization is an objective process dictated by time. According to UN forecasts, 2050 percent of the population of the Earth will live already on the asphalt by 70. And these figures are even more indicative for the northern countries: in neighboring Russia, according to the same international estimates, more than 2025 percent of the population will become citizens in 90 already in the year. And the world can cite many examples of rurally developed countries where the majority of the population is urban. After all, food security has ceased to require the exhausting labor of the overwhelming majority of the population, as it once was. For example, Australia: a state that feeds high-quality meat and other agricultural products to a significant part of the world, a state whose 61% territory covers more than 135 thousands of farmers and cattle farms, remains a country where almost the entire population is concentrated in cities along the coast. But the Congo, where 90 percent lives in the countryside and where you can shoot four crops a year, is somehow not seen on the world agricultural market. The work that the Soviet collective farm performed while losing health, thousands of people, today are able to perform hundreds, if not dozens of trained specialists on modern "smart" machines. Therefore, the question arises: what to do with the released people. Only in the city and create a housing and production base for them there. The increase in the number of citizens is an undoubted benefit for the country. Cities are the scientific, cultural and industrial points of growth, the place where the main resource of our time, information, is concentrated. A state in which a larger share of the population lives in comfortable, developed cities is more competitive, and this is an indisputable fact. But urbanization is a challenge to the state. How to take in our cities people from auls, most of whom are young people, how to provide them with decent housing, work, education, how to promote their cultural adaptation in the city? We are now in the process of "false urbanization", an uncontrolled process. And it needs to be systematized. Start with the relocation of the rural population of the South to the cities of the North, starting a large-scale program of national urbanization.

There will be public resistance, including from the "Soviet" national intelligentsia and their young followers. They will begin to express their regrets related to the withering away of the Kazakh aul, the loss of the traditional way of life adopted by our ancestors. However, nostalgia, no matter how explicable, should not slow down the movement of a nation forward, should not conflict with common sense. Progress cannot be stopped. Around the world, the seemingly unchanged national lifestyles are breaking down, and this is a natural phenomenon. I doubt that any of our metropolitan “guardians of the village” will agree to voluntarily give up a comfortable apartment and move to the steppe. A strong nation whose representatives strive for a better life, comfort, knowledge and high-quality medical care. And this is possible only in cities.

Opinions are taken from the personal pages of experts in the social network "Facebook"
Ctrl Enter
Noticed oshЫbku Highlight text and press. Ctrl + Enter
We are
Kazakhstan: ukro-maydannaya rotWhy not all Russians will leave Kazakhstan?
Military Reviewin Yandex News
Military Reviewin Google News
376 comments
Information
Dear reader, to leave comments on the publication, you must sign in.