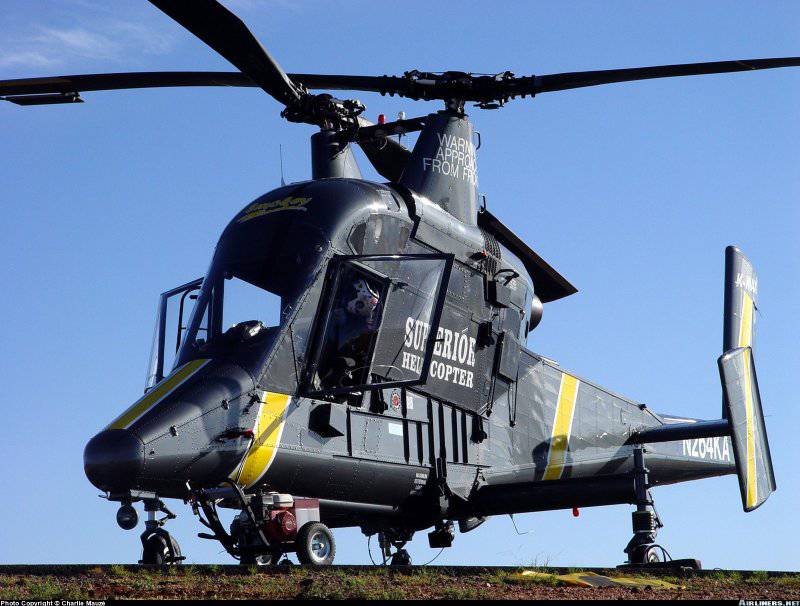 The first thought when meeting Kaman K-MAX is impossible!

The helicopter violates the space-time continuum and the laws of Euclidean geometry, otherwise how to explain the pattern of motion of its blades? Unlike the coaxial scheme, in which the planes of rotation of the screws are parallel to each other, or the transverse scheme, in which the bushings of the screws are separated by a considerable distance exceeding the length of the blades, something unimaginable happens here - the K-MAX rotors intersect in space! Another moment, and they will smash the sleeves of the screws and cut each other! But no ... the blades miraculously pass through matter and diverge to the sides. The helicopter safely continues its flight.

The above-described scheme with intersecting rotors is called “synchropper”. The ingenious invention belongs to the German engineer Anton Flettner, who experimented with such machines at the turn of 30 — 40's (Fl.265 and Fl.282 “Hummingbirds”).

Synchropper - twin-screw helicopter transverse scheme with cross-bearing rotors. The screws rotate in opposite directions, with their axis of rotation located at a small angle to each other. The rotation of the screws is synchronized with the help of a rigid mechanical connection to ensure the prevention of collisions of the blades.

Like helicopters with coaxial rotors (for example, Kamov Design Bureau helicopters), synchro drivers lack a bulky tail boom and no power loss to the tail rotor drive. Among other advantages compared with the "classic" single-rotor helicopters - less noise and vibration. Smaller moment of inertia - and, as a result, better maneuverability.

At the same time, the scheme with intersecting rotors eliminates the complex column of rotors: a simple and easy transmission reduces the cost of the synchroter and facilitates its maintenance in comparison with helicopters with coaxial propellers.

The key disadvantage of synchropters is the lower efficiency of the rotors in horizontal flight due to their mutual influence on each other. In addition, the plane of the screws slightly rotated in different directions - reduced thrust (thrust vector at the cosine of the angle). As a result, synchropters are somewhat inferior in speed to helicopters built according to other schemes. Another unpleasant feature is the occurrence of a longitudinal moment and problems with balancing the rotor-wing machine. To control the helicopter used servo-wings on the rotor blades. 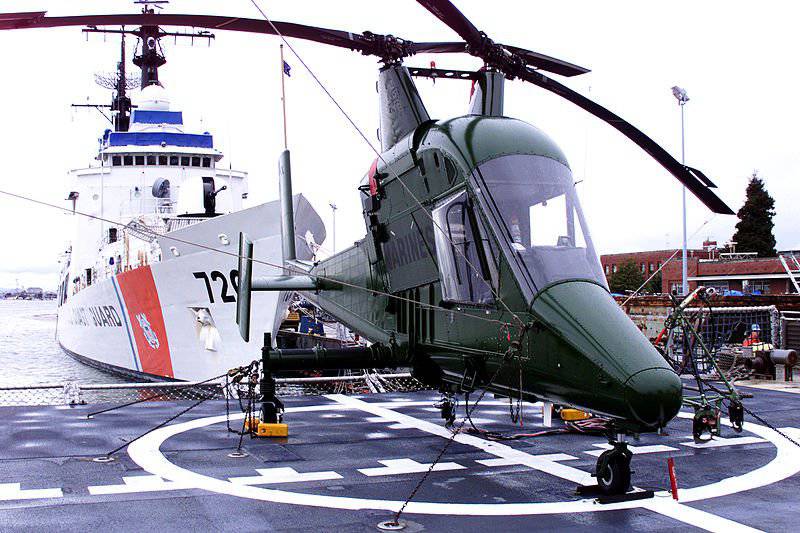 The specific scheme is a kind of "calling card" Kaman Aircraft. This small helicopter-building company traditionally occupies narrow niches of the civilian market of special-purpose helicopters and creates specialized machines for military customers. Volumes of serial production are limited to a couple dozen (at best, hundreds) of copies. Among the most well-known works is Kaman (light antisubmarine / multipurpose helicopter SH-2 "SeaSprite", which equipped all the US Navy cruisers and frigates in 60 — 70's).

In addition to the “Sysprite”, built on the usual single-rotor scheme with a tail rotor, the “Kaman Aircraft” was very successful in creating helicopters with crossing screws. The company's founder, Charles Kaman, built his first K-125 synchro in 1945, but the first commercially successful model appeared two years later. Kaman HH-43 Huski search and rescue and firefighter synchro serializer was serially commissioned by the US Air Force and exported to other countries of the world.

Half a century later, after the success of the Husky, Kaman Aircraft decided to once again turn to building helicopters with crossover rotors. In 1991, the prototype of a flying crane K-MAX, intended for the carriage of goods on an external sling, rose into the air.

According to the experts of Kaman Aircraft, synchroters are most effective in operations involving the vertical lifting of cargo, since Two rotors create a large lift, and the layout provides a concentration of lift in the center of gravity of the helicopter. The design allows you to create a “wedge-shaped” silhouette, which helps to improve the view of the lower hemisphere from the cab - when you need to check the condition of the load on the external sling, as well as choose with high accuracy the place to unload it or pick it up.

An important condition is the absence of a tail rotor: in conditions where flying cranes (construction sites, logging houses) usually work, there is a high probability of an accidental “meeting” with power lines, tree branches and nearby buildings. In this regard, the synchropper is much safer than conventional helicopters.

As for the speed (the maximum permissible speed of K-MAX is just 185 km / h), it does not play a big role in the characteristics of flying cranes, usually making shuttle flights for a short distance.

The K-MAX helicopter was created with an eye to the interests of logging and woodworking companies: a small, extremely reliable flying crane for logging. Prepared for use in cold climates and limited field maintenance. Improved visibility, enhanced tricycle landing gear, rejection of complex and capricious equipment.

Work on logging sites, on hard-to-reach slopes and on construction sites represents a considerable threat to the life and health of a pilot. Safety measures come to the fore: the K-MAX helicopter is standardly equipped with a Simula shock absorbing seat with a five-point harness that can keep the pilot alive when he hits an overload of 20g.

It is noteworthy that out of 38 built copies of Kaman K-MAX, twelve vehicles have been lost as a result of various accidents and emergency situations. Nevertheless, the remaining helicopters continue to be actively exploited by logging and construction companies in the USA, Germany, Switzerland, Colombia and New Zealand.

... He was a great guy and he worked conscientiously. But a quiet peaceful life did not work out - the Pentagon became interested in a trumping helicopter.

About how K-MAX pulled a soldier's strap

In modern local wars, most of the sorties aviation accounts for the transportation of various goods in the conflict zone. Helicopter pilots are especially stressed, on whose shoulders lies the supply of thousands of armies dispersed over individual roadblocks over a vast territory, often in hard-to-reach areas, surrounded by a hostile population.

This is undoubtedly about Afghanistan. The 40 Army's air force first encountered similar difficulties: helicopter pilots had to work endurance miracles in the winter, supplying the 100-thousandth military contingent with everything necessary - from food, ammunition and kerosene to tents, warm clothes, books and other specific goods.

The Yankees, who for many years have been waging a fruitless fight against al Qaeda terrorists in the mountain gorges of Afghanistan, are also aware of this. The rate of supply of soldiers is constantly growing. Cargo traffic increases.

At this, Kaman decided to play, offering the military an unexpected solution to the problem — an unmanned vehicle capable of automatically delivering cargo in the conflict zone. 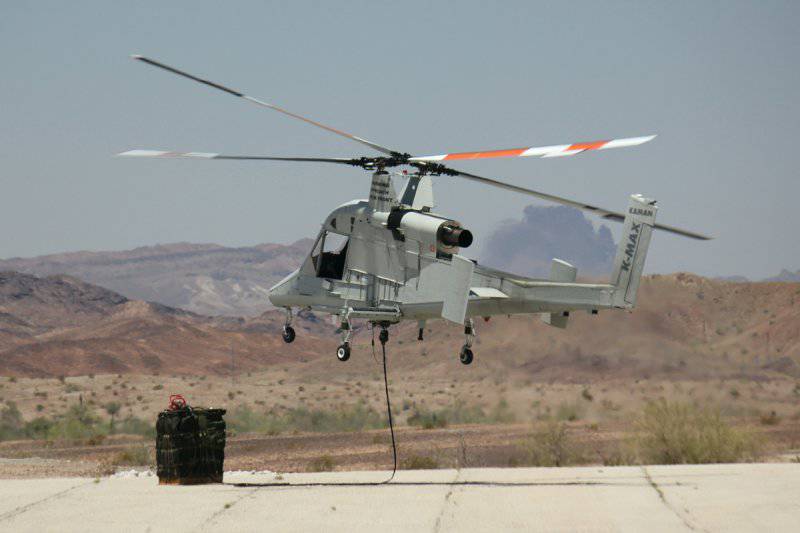 In the current situation, such transport seems to be a justified decision: a person does not need to risk life in such banal and simple missions, flying daily over a hostile territory. Fly from point A (Bagram airfield) to point B (remote checkpoint near Jalalabad) and carefully unload the cargo on a rocky plateau - such a mission does not require advanced supercomputers, special piloting skills and any complex technical solutions. The entire flight takes place according to the GPS system, the signals of radio beacons, and, if necessary, under the remote control of the operator.

The first prototype of the K-MAX Unmanned Multi-Mission Helicopter transport unmanned helicopter, created in collaboration with Lokheed Martin, was presented to the military in 2008 year. An updated version appeared in 2010.

In the same year, Kaman received a grant of $ 46 million for the construction of two transport "UAVs" to demonstrate the possibility of this system in practice. The project was overseen by the Marine Aviation Systems Command (NAVAIR). By the end of 2011, both ordered helicopters, having received the corresponding coloring of the Marine Corps aviation, arrived in the Afghan mountains and began test flights.

The first transport departure in conditions close to combat, took place 17 December 2011 of the year. The drone delivered tons of food to the remote Combat Outpost Payne base on the 1,5 external sling. 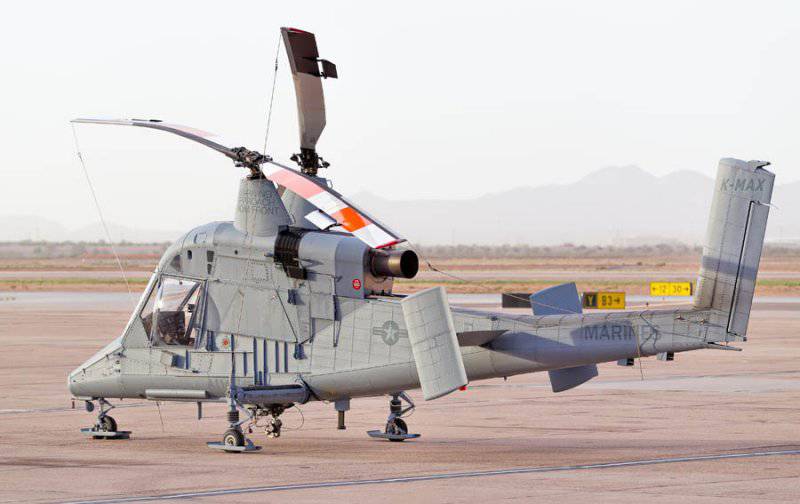 Marines liked the idea - drones began to regularly send to the job. As of February 2013, both K-MAX carried out 600 sorties over the Afghan mountains, spending over 700 hours in the air and dragging around 900 tons of different loads during this time. During this time, Kaman received a prize from the magazine Popular Science, and the unmanned version of the K-MAX helicopter learned to fly in the dark and deliver cargo with an accuracy of up to 3 meters.

18 March 2013, the ILC command extended the project indefinitely with the wording “until special orders were received”. There is no money for the purchase of new drones, but no one wants to abandon transport UAVs.

However, 5 June 2013, the trouble occurred. During one of the transport missions on approaching the "point" the drone fell to the ground, seriously damaging the fuselage. The investigation revealed that this was not an operator error - the UAV was offline at that moment, following the programmed route. The commission found no traces of the effects of enemy fire or malfunctions in the "mechanical" part and helicopter engine. One should not seriously consider the version with the appearance of EW stations similar to the Russian Avtobaz in Afghan Basmachs. It seems that the fault was in the program, or the wrong signal from one of the UAV sensors.

In September, the crashed K-MAX was sent for repairs in the US, the second drone continued to carry out tasks related to the transportation of goods over Afghanistan.

The episode with the crash of the UAV did not diminish interest in the unmanned version of the flying crane: Kaman successfully presented its idea at the Paris Air Show, having received warm feedback from future foreign customers.

The new version of the UAV has the ability to automatically capture cargo (a special module is needed on the container body, which supplies the UAV radio signal) and group flight skills in the same system with other unmanned and manned vehicles. Estimated load capacity - 5000 pounds of cargo (2270 kg) for one flight.

There is reason to believe that the need for such vehicles may arise not only over the battlefield, but also in areas of man-made disasters - it is enough to recall the risk of the Chernobyl disaster cleaners, who were forced to throw sandbags from the helicopters into the crater of the torn fourth power unit.

Due to the undoubted usefulness of such a system, Kaman and Lokheed Martin expect in the near future to receive a contract from KMP aviation for the supply of at least 16 serial UAVs of this type.

A holy place is never empty. Sensing the smell of profit, the Boeing pulled up to the scene with its version of a transport UAV based on a light army helicopter “Little Bird”.

Comparative testing of Kaman K-MAX and Boeing H-6U Little Bird drones began in February 2014 at the Quantiko military base in Virginia. 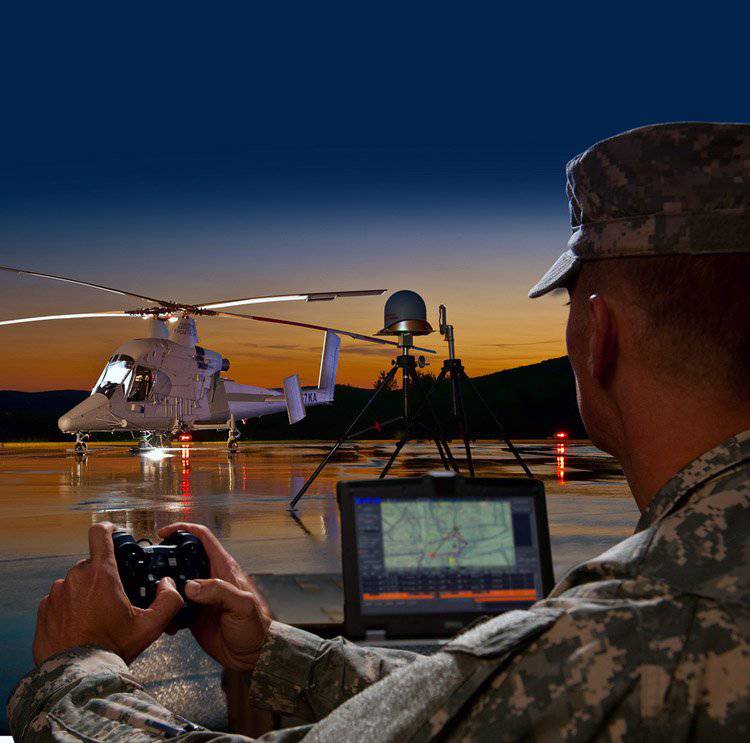