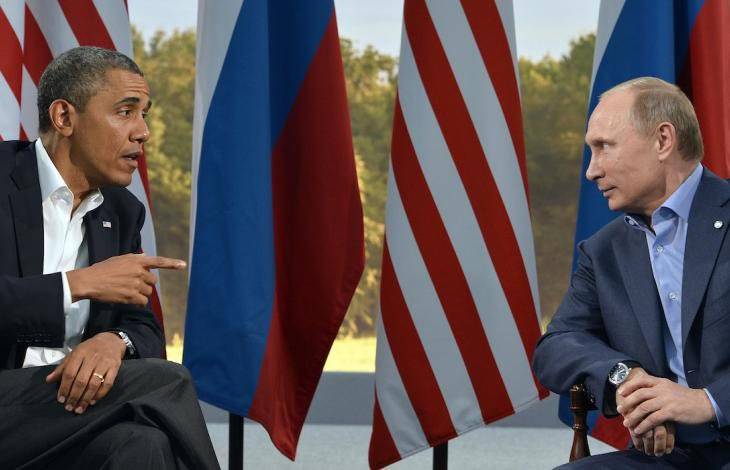 The recent coup in Kiev attracted the attention of Russian and foreign media. Still would! The last so large-scale coup Europe experienced in 1989, when Nicolae Ceausescu was overthrown in Romania. The headlines of the newspapers of Russia, the European Union and the United States for several weeks were entirely devoted to what is happening in Ukraine, but completely ignored the other events that marked the February days. Moreover, the Kiev coup in the chain of these events occupies an important, but not at all central place.

The coup in Ukraine should be considered in the context of other political incidents in Eastern Europe. NATO continues its expansion to the east, the West introduces sanctions against Russia and is trying to artificially lower the cost of energy, while elements of the missile defense system are being deployed in Romania and Poland.

No less disturbing news come from the Middle East: there is a chance that the United States after 1 April will be ready for strikes on Syria. American mercenaries remain in Iraq, and Washington is still able to influence the minds of some Iraqi politicians. In Afghanistan, the Taliban and various groups that control the drug trade will gain strength in the coming years.

The struggle for the Arctic continues: the unlimited resources of this region attract many regional players. Inside Russia, there is a “fifth column”, and the country itself may soon be involved in an arms race with the United States.

In such circumstances, the Kiev coup looks like a legitimate event, subordinate to the imperial logic of Washington. The goal of the February putsch is to oust Russia from Eastern Europe, to place NATO military bases in close proximity to the Russian borders.

Over the past twenty years, the North Atlantic Alliance has made a stunning breakthrough from Berlin to St. Petersburg. It seems that in Washington and Brussels they believe that the “winners” in the Cold War have the right to reshape the world at their own discretion. And the greatest interest is Russia - one of the richest countries in the world. The West skillfully took advantage of the collapse of the USSR, and in the 90s, unlike the Russian rulers of that time, began implementing a large-scale program to “master” Eastern Europe: Germany was united and Yugoslavia was fragmented, and Czechoslovakia was divided into two independent republics. The “divide and conquer” principle that the United States uses in foreign policy has once again proved to be incredibly effective.

The events of the last three months are a continuation of what started in 1985-1991. The case is not completed, because Russia remains a monolithic country and, moreover, it has sufficient potential to consolidate the scattered peoples of Eastern Europe. The West will not allow to compete with him on equal terms!

It seems the US plans to repeat the cold war, but on a much smaller scale. Now the struggle against the Russian bloc will unfold not on all continents of the world, but will affect only Eastern Europe, the Caucasus, Central Asia and the Arctic. Far East from the West is unlikely to "cover".

True, there are serious doubts that the plans of Western leaders will be realized, and the conflict will be fought exclusively in Eurasia: we must not forget that Russia has allies in different parts of the world. Ecuador, Venezuela, Cuba - in South America, Syria and Armenia - in the Middle East, China, India and almost all states - in South and East Asia. In Africa, countries that once suffered from European colonialists and do not want to return to the 19 century, as some European politicians would like, come out on the side of Russia. Entering a confrontation with Russia, the United States and the European Union challenge the whole world, but, as история, in loneliness it is impossible to resist all at once. Therefore, the second cold war will turn out to be as large-scale as the first. And not the fact that the West will come out the winner again.

The reaction of Russia

Of course, with the growth of threats from abroad, Foreign Ministry officials and state security officers are not asleep. Russia responds promptly to the challenges of its national security, for example, it takes an active position on resolving the political crisis in Ukraine. President Vladimir Putin and diplomatic officials have repeatedly expressed the inadmissibility of NATO expansion to the east and the deployment of a missile defense system; modernization of the armed forces, including the Strategic Missile Forces. Constantly searching for new allies in the international arena.

However, too much was forgiven the West. The “color revolutions”, the war in the Caucasus in 2008, the admission of the post-Soviet countries to the European Union and the North Atlantic alliance were forgiven: at that time Russia was successful on other fronts, in particular, successfully operating in the Middle East. However, the Kiev coup was the last straw that broke the patience. Ukraine is of great strategic importance for Russia, and neither the receipt of the shelf of the Sea of ​​Okhotsk nor the successful suppression of the Islamic insurgency in Syria can compensate for its loss.

Even if the entire Southeast leaves Ukraine, the danger will remain, because NATO will immediately want to seize the metropolitan area along with the adjacent regions.

Vladimir Putin in his last speech stated that "the West has crossed the line." Previously, only Barack Obama allowed himself to speak in a similar way: then Muammar Gaddafi crossed the line, then Bashar Asad ... From America's 1991, no one for America has carried out the “red lines”. Vladimir Putin made a real breakthrough in diplomacy, because for the first time in many years he established clear boundaries of American influence and hinted unambiguously: “Do not annoy us, guys, do not forget that Russia also has interests, and not only in Ukraine!”

It seems that Viktor Yanukovych was the last of the galaxy of overthrown rulers. The “Arab Spring” in Ukraine has succeeded, but it will break teeth in Russia. Vladimir Putin’s speech on the reunification of Crimea with Russia can be called programmatic, since it outlines the outlines of future foreign and domestic policies aimed at preserving the state.

What will be the "red line"?

The “red line” that Vladimir Putin is talking about is maintaining the neutral status of buffer states such as Sweden, Finland, Ukraine, and Georgia. The inclusion of these countries in NATO will have unpredictable consequences. First of all, for the alliance itself.

Everything is more or less clear with Georgia: in the coming years, Tbilisi can hardly count on military support from the United States. Georgia will not become a member of NATO because it does not meet the requirements of this organization: the West still considers Abkhazia and South Ossetia as regions of Georgia.

The situation with the Scandinavian countries is much more complicated: Finland announced its intention to give up its non-aligned status. This is a serious threat, because the eastern border of the North Atlantic Alliance may be just a few dozen kilometers from St. Petersburg. Sweden prefers to refrain from harsh statements.

As for Ukraine, it is unlikely to be accepted into NATO. This country is too unstable to become a member of the alliance. Brussels fears that the armies of European states will be drawn into a potential civil war in Ukraine, which is clearly not in line with the plans of the European Union.

In the Baltics, the “red line” is the deployment of additional military groups by the North Atlantic Alliance, especially those equipped with offensive weapons. Then, for St. Petersburg, the threat will be created not from the north, but from the west.

Also, a “red line” exists in the economy: one cannot allow the cost of one barrel of oil to fall below the level of 25 dollars, otherwise the world will be plunged into chaos. And this is not an exaggeration: in addition to Russia, many other states are involved in oil exports, and a serious imbalance in the energy market will lead to serious advances in geopolitics. In addition to Russia, Norway, Great Britain, Canada, and the USA, where oil and gas production is also developed, will be seriously affected.

Also, it cannot be excluded that, trying to inflate the prices for “black gold”, some Middle Eastern countries will begin to create all sorts of artificial obstacles to its production and delivery. And not the fact that everything will end peacefully.

Therefore, the “red line” in the economy is a step towards a new global economic crisis, which, moreover, will be accompanied by endless wars.

Thus, Russia is ready to give an adequate response to any political challenges. The sanctions, it turns out, are not so terrible as they were told about. In the extreme case, if Barack Obama wants a big war and goes beyond what is permitted, total conflict will lead not only to the death of the “enemies” of the USA, but also to the destruction of the existing world system as a whole, including the United States itself. Obviously, such a suicidal scenario is not beneficial for anyone, and it is to be hoped that politicians from the White House will have enough sense to stop a few steps from the red line held by Vladimir Putin to avoid the start of a new global confrontation. Of course, if it has not already begun.

Ctrl Enter
Noticed oshЫbku Highlight text and press. Ctrl + Enter
We are
Results of the week. “Why is the war going on? Do they not read newspapers? ”“I don’t think any Western army would survive Stalingrad” (Radio Free Europe / Radio Liberty)
Military Reviewin Yandex News
Military Reviewin Google News
56 comments
Information
Dear reader, to leave comments on the publication, you must sign in.