"Satan" could bring a warhead to Mars 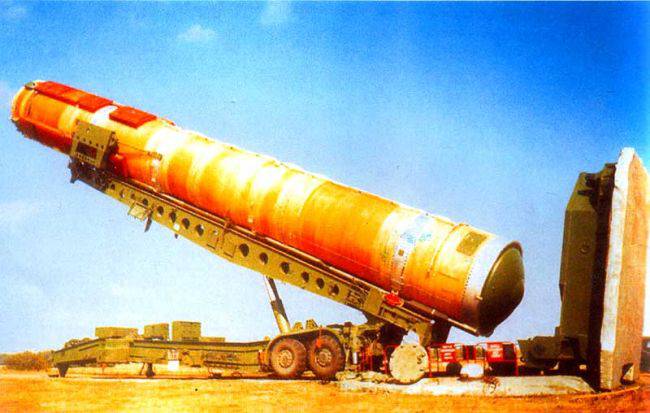 For a beginner, the launch of the most powerful of the existing intercontinental ballistic missiles in the world, SS-18 Satan, invariably turns into disappointment.

Half a day you are shaking a passing transport "board" to Baikonur. Then you dance at the observation point for a couple of hours, trying to warm up under the penetrating Kazakh steppe wind (for 45 minutes before the start, the security service completely blocks the traffic on the roads of the landfill, and after that you will not get there). Finally, the prelaunch count is complete. Far at the edge of the horizon, a tiny pencil jumps out of the ground like a little devil from a snuffbox, hangs for a split second, and then rushes skyward in a shining cloud. Only a couple of minutes later you are covered with echoes of heavy roar of cruise engines, and the rocket itself is already sparkling at the zenith of a distant asterisk. A yellowish cloud of dust and unburned amyl heptyl settles above the launch site.

All this cannot be compared with the majestic leisurely launch of peaceful space rocket carriers. In addition, their launches can be observed from a much closer distance, since oxygen-kerosene engines, even in the event of an accident, do not threaten with the destruction of all life around. With "Satan" otherwise. Looking at the photo and video of the launch again and again, you begin to understand: “My mom! It's absolutely impossible! ” 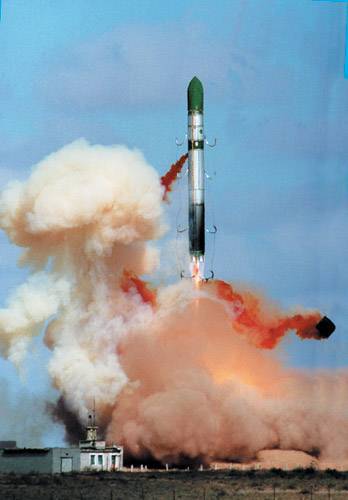 So the creator of “Satan”, the designer Mikhail Yangel and his fellow rocket engineers, initially reacted to the idea: “So that 211 tons“ jump out ”from the mine ?! It is impossible! ”In 1969, when the Yuzhnoye design bureau, headed by Yangel, began work on a new heavy missile, the Р-36М, the“ hot ”gas-dynamic start was considered the normal way of launching from the mine launcher . Of course, some experience in designing “products” using a “cold” (“mortar”) start has been gained. Yangel himself experimented with him for almost 4 of the year, developing the RT-20P missile that was not accepted for service. But after all, RT-20P was "ultralight" - just 30 tons! In addition, it was unique in its layout: the first stage was solid fuel, the second was liquid fuel. This eliminated the need to solve the puzzling problems associated with the "mortar" start of guaranteed first stage ignition. Developers of the P-36M launcher, Yangelya, from St. Petersburg TsKB-34 (now Spetsmash) first categorically rejected the very possibility of a “mortar” launch for a liquid-fuel rocket weighing more than 200 t. decided to try.

I had to experiment for a long time. The developers of the launcher were faced with the fact that the mass of the rocket did not allow the use of conventional means for its cushioning in the mine - giant metal springs on which its lighter counterparts rested. The springs had to be replaced with the most powerful shock absorbers using high-pressure gas (in this case, the damping properties should not have decreased over the entire 10-15-year missile life cycle). Then came the turn of development of powder pressure accumulators (PAD), which would throw this colossus to a height of at least 20 m above the top edge of the mine. The whole 1971 year at Baikonur was carried out unusual experiments. During the so-called “throwing” tests, the “Satan” mass-dimensional mock-up, filled with neutral alkaline solution instead of nitrogen tetroxide and asymmetric dimethyl hydrazine, flew out of the mine under the action of PAD. At the height of 20, powder accelerators were activated, which pulled off the pan from the rocket, covering its main engines at the time of the “mortar” launch, but, of course, the engines themselves did not start. “Satan” was falling to the ground (into a huge concrete tray specially prepared near the mine) and smashed to smithereens. And so nine times.

And anyway, the first three real starts of the P-36M, under the full program of flight design tests, were emergency. Only for the fourth time, February 21 1973, the “Satan” managed not to destroy its own launcher and fly to where it was launched - to the Kamchatka Kura test site.

Rocket in a glass

Experimenting with the "mortar" start, the designers of "Satan" solved several problems. Without an increase in the starting mass, the energy capabilities of the rocket increased. It was also important to reduce the vibration loads that are inevitably caused by a gas-dynamic start on a rocket taking off. However, the main thing was still increasing the survivability of the entire complex in the event of the first nuclear strike by the enemy. Adopted by the new P-36M located in the mines, which previously stood on duty their predecessor - heavy missiles P-36 (SS9 Scarp). More precisely, the old mines were used in part: the exhaust ducts and grids required for the gas-dynamic start of the P-36, “Satan” were useless. Their place was taken by a metal power “glass” with a depreciation system (vertical and horizontal) and launcher equipment, into which a new rocket was loaded right in the factory transport and launch container. At the same time, the security of the mine and the missile located in it from the damaging factors of a nuclear explosion increased by more than an order of magnitude. 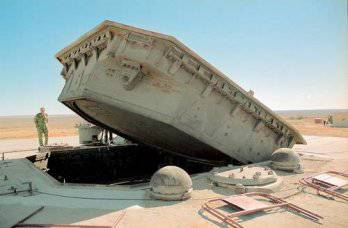 By the way, “Satan” is protected from the first nuclear strike not only by its mine. The device of the rocket provides for the possibility of unimpeded passage through the zone of an air nuclear explosion (in case the enemy tries to cover the R-36М positional base area with them in order to remove the “Satan” from the game). Outside on the rocket there is a special heat-shielding coating that allows to overcome the dust cloud after the explosion. And so that the radiation does not affect the operation of the onboard control systems, special sensors simply turn off the “brain” of the rocket as it passes through the explosion zone: the engines continue to work, but the control systems are stabilized. Only after leaving the danger zone do they turn on again, analyze the trajectory, introduce corrections and lead the rocket to the target.

Unsurpassed launch range (up to 16 thousand km), huge combat load in 8,8 t, up to 10 individualized targeting warheads plus the most advanced missile defense system available today, equipped with a system of false targets - all this makes Satan scary and unique weapons.

For its latest version (P-36М2), even a breeding platform was developed on which 20 or even 36 warheads could be installed. But under the contract there could not be more than ten. It is also important that “Satan” is a whole family of rockets with subspecies. And each can carry a different set of payloads. In one of the variants (Р-36М) 8 warheads are placed, covered with a figure fairing with 4 protrusions. It looks like the 4 spindle is fixed on the nose of the rocket. In each, there are two warheads connected in pairs (bases to each other), which are already divorced over the target. Starting with the P-36MUTTH, which had improved the accuracy of guidance, it became possible to put the warheads weaker and bring their number to ten. They were fastened under the head fairing discharged in flight separately from each other on a special frame in two tiers.

Later, the idea of ​​homing heads had to be abandoned: they turned out to be unsuitable for strategic ballistic carriers because of problems entering the atmosphere and for some other reasons. 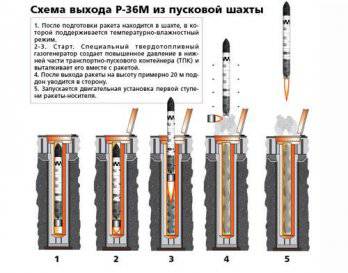 Future historians will have to puzzle over what “Satan” really was - a weapon of attack or defense. The orbital version of its direct “progenitress”, the first Soviet heavy rocket SS-9 Scarp (Р-36О), put into service in the 1968 year, allowed to throw a nuclear warhead into near-earth orbit, to strike at the enemy on any turn. That is, to attack the United States not through the Pole, where American radars constantly monitored us, but from any direction that was not protected by tracking systems and missile defense systems. It was, in fact, an ideal weapon, the use of which the enemy could find out only when nuclear fungi would rise over his cities. However, already in 1972, the Americans launched a satellite group of missile attack warnings in orbit, which detected not the launch of the missiles, but the moment of launch. Soon Moscow entered into an agreement with Washington on the prohibition of the introduction of nuclear weapons into space.

Theoretically, “Satan” inherited these features. At least now, when it is launched from Baikonur in the form of a Dnepr conversion booster rocket, it easily takes payloads into near-earth orbits, whose weight is slightly less than the warheads installed on it. In this case, the missiles come to the cosmodrome from the regiment of the Strategic Missile Forces regiment, where they were on combat duty, in a standard configuration. For space programs, except for individual-targeting nuclear warheads, only induction engines do not work. When placing payloads into orbit, they are used as a third stage. Judging by the advertising campaign launched for the promotion of Dnipro to the international market of commercial launches, it can also be used for short-distance interplanetary transportation — cargo delivery to the Moon, Mars and Venus. It turns out that, if necessary, "Satan" can deliver there nuclear warheads.

However, all that followed the decommissioning of the P-36 история the modernization of Soviet heavy missiles seems to be evidence of their purely defensive purpose. The fact that the creation of the P-36M by the Yangel gave a serious role to the survivability of the missile complex confirms that it was planned to be used not at the first and even not at the retaliatory strike, but at the “deep” retaliatory strike, when the enemy’s missiles covered our territory. The same can be said about the latest modifications of “Satan”, which was developed by his successor, Vladimir Utkin, after the development of Mikhail Yangel. So in a recent statement by the Russian military leadership that the life of the "Satan" will be extended for another decade, there was not so much a threat as concern about the American plans to deploy a national missile defense system. And the regular launch from Baikonur of the conversion version of “Satan” (Dnepr missiles) confirms that it is in full combat readiness.

Ctrl Enter
Noticed oshЫbku Highlight text and press. Ctrl + Enter
We are
Missile attack on Europe: myth or reality?"Batons" intercontinental destination
82 comments
Information
Dear reader, to leave comments on the publication, you must to register.