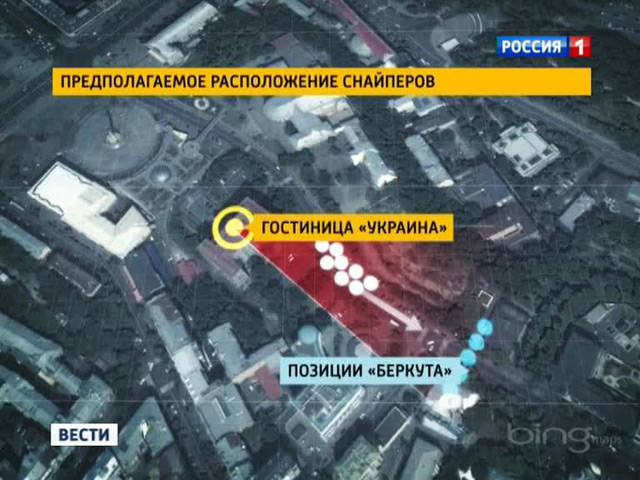 Snipers on the Maidan worked on the orders of the "Right Sector", and official Moscow has every reason to be confident in this. This statement was made by Russian Foreign Minister Sergei Lavrov.

"We have numerous facts that I shared with my partners, about whose embassy regularly contacted the Right Sector, where its leaders constantly came, whose representatives were on the Independence all the time in those premises that controlled the Right Sector and from where he led many atrocities, including the organization of firing snipers. I will leave it on the conscience of those who are engaged in such exercises, "the minister said in a broadcast on Sunday Time with Irada Zeynalova on Channel One.

Also, the head of Russian diplomacy said that Kiev does not accept the Russian idea of ​​the federalization of Ukraine. Also, they do not intend to give the Russian language the status of a second state, Lavrov added. “Andrei Deshchitsa said that our proposal is unacceptable, because federalization contradicts the fundamental principles of the state structure of Ukraine. It’s not clear why. I don’t know such principles,” the Russian ITAR-TASS quoted as saying.

Moreover, the minister added, if the new authorities in Kiev continue to ignore the Russians and the Russian language, the constitutional reform will not lead to anything good. “The idea of ​​making Russian the second state language is also unacceptable,” the minister continued, commenting on the results of the meeting with Deshitsa in The Hague. “This was said against the background of the well-known statements of the Ukrainian Foreign Ministry, other official representatives of the current authorities of Ukraine that ethnogenesis, Russian and Russian are not system-forming factors of the Ukrainian state. "

As for relations between Ukraine and the world community, the head of the Foreign Ministry of the Russian Federation expressed confidence that Russia, the US and the EU should urge Kiev to begin a national dialogue. “We regularly meet with John Kerry. For me, it’s surprising that the Europeans have given the Ukrainian topic to Washington in terms of relations with Russia. The ideas of creating a contact group are being developed, we have already spoken about this more than once. The contact group is conceived as a structure, which Europe and the United States will “look after” as we begin to negotiate something with the Ukrainians, ”the minister said.

At the same time, Lavrov added, Moscow proposed a different approach. "If our Western partners are ready, then Russia, the United States and the European Union could form a support group for Ukraine and formulate general calls for those who are now leading in Kiev to initiate a national dialogue, invite all political forces to equal negotiations" .

As for the movements of the Russian military, the head of Russian diplomacy said that the right to move the armed forces on its territory has not been canceled. "Russian military units are based in our country. Periodically, they conduct planned, unplanned and sudden exercises, as do any self-respecting states that are concerned that their armed forces are in combat-worthy condition," the foreign minister explained.

The recent exercises "were transparent and fully fit the criteria that exist within the OSCE," said the head of the Russian Foreign Ministry and added that all necessary information was sent about the exercises.

Ctrl Enter
Noticed oshЫbku Highlight text and press. Ctrl + Enter
We are
Did the breeder go "on demobilization"?
Military Reviewin Yandex News
Military Reviewin Google News
82 comments
Information
Dear reader, to leave comments on the publication, you must sign in.