Swiss Air Force. Against all! 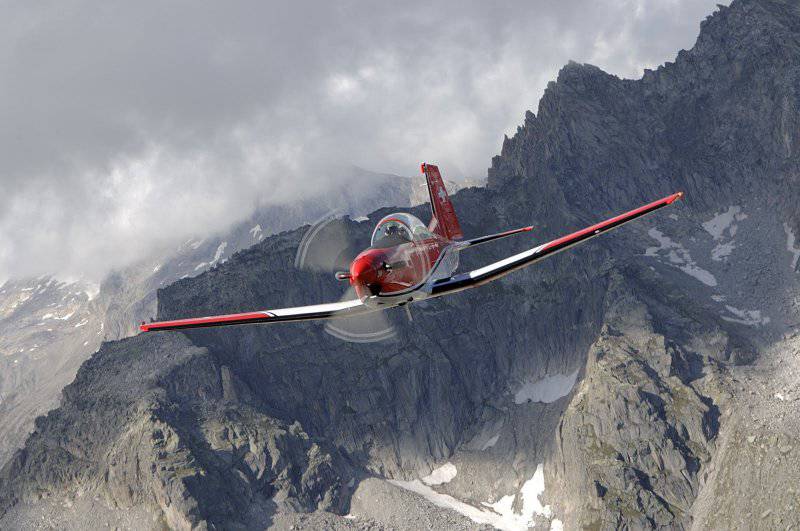 10 May 1940, a German Dornier bomber Do.17 was intercepted by fighters of the Swiss Air Force and landed at the Altenhein airfield.

1 June The 1940 formation from the 36 bomber He.111, which took off on a mission to the area of ​​Marseille, decided to “cut off the corner” through the airspace of a neutral country. The 12 of the Swiss Messerschmitt was raised to intercept - the violators tried to resist. As a result, two German aircraft were destroyed. The Swiss suffered no losses.

4 June 1940 was held “action retaliation” - a lone He.111 lured 12 Swiss Bf.109E to the territory of France, where they were hit by 28 Luftwaffe fighters. As a result of the short bout, the intruder bomber and two German Me.110 were shot down. Own losses of the Swiss were 1 aircraft.

The case took a serious turn - the tiny country and its “toy” air forces desperately did not want to let the Luftwaffe planes pass by and severely suppressed any violations of their borders.

8 June 1940 launched an open raid into Swiss territory - a group of He.111 bombers (KG 1) under 32 Bf.110C escort (from II / ZG 76) attempted to strike at Swiss air forces airfields. The plans of the Nazis prevented the case - in the way of the group was a patrol EKW C-35. The Kukuruznik was immediately shot down, but before his death he managed to raise the alarm. Twelve Bf.109 immediately flew to intercept. In the ensuing air battle, the Swiss pilots managed to shoot down three Messerschmitt in exchange for the loss of one of their aircraft. 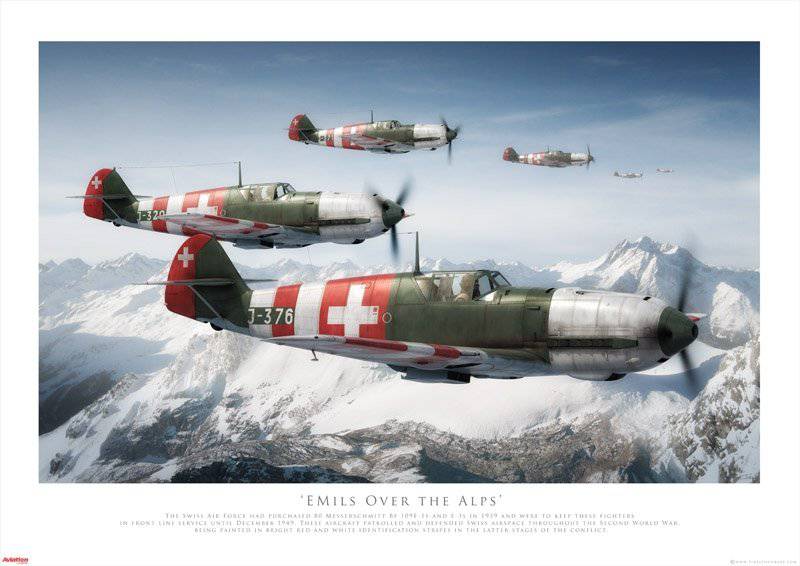 Having suffered a fiasco in air battles, the Germans no longer dared to tempt fate. The new plan to neutralize the Swiss Air Force provided an old reliable way - sabotage on the ground, produced by the caring hands of German saboteurs.

16 June 1940 The German commando group consisting of 10 people was fully captured by the Swiss military. Since then, events have evolved rapidly ...

June 17 capitulated France, the Wehrmacht units reached the Swiss border in the Du region with the intention of continuing the offensive on the territory of the last "island of stability" in the center of Europe. The Swiss leadership made desperate attempts to keep the peace. In order to avoid the escalation of the conflict, the pilots were forbidden to attack the single violating aircraft.

19 June was received another note from Berlin, containing a direct threat:

The Reich government does not intend to waste more words, but will protect German interests in other ways if such events occur in the future.

Germany was seriously preparing for the operation "Tannenbaum" - the armed invasion and occupation of Switzerland by the forces of the Wehrmacht's 12 Army.

The commander-in-chief of the Swiss Armed Forces hastily issued an order prohibiting the interception of any aircraft over the territory of the country. 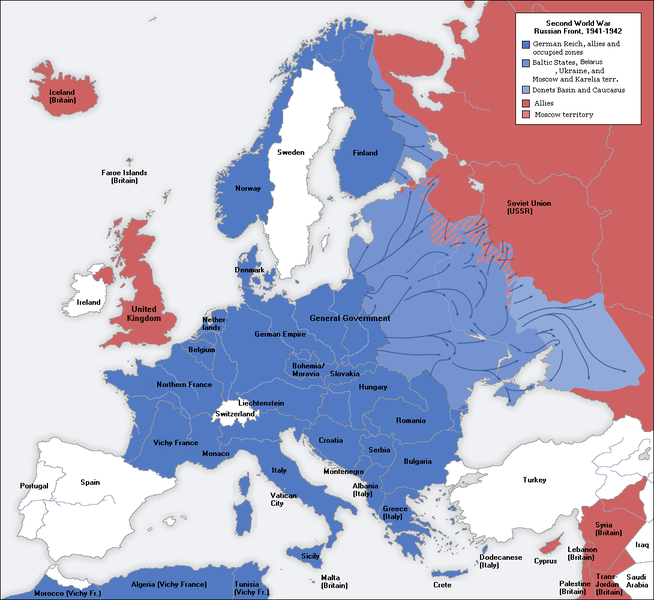 Fortunately for the Swiss, the war did not happen. Switzerland was more useful to the Reich as a partner, rather than as an enemy. Despite its small size (the area of ​​Switzerland is approximately equal to the area of ​​the Crimea), an armed invasion of a mountainous country, dotted with tunnels, fortifications and firing points cut into the rocks, with 100% mobilizing its population (well-trained and well-equipped people's militia) made the seizure of Switzerland extremely long and costly event. This would not have taken the 2-3 of the day, as planned by the German leadership.

The 40-day standoff of the Luftwaffe and the Schweizer Luftwaffe cost the Germans 11 aircraft. The losses of the Swiss turned out to be noticeably lower - the total of the XnUMX fighter Bf.2E and one patrol C-109.

Since the middle of 1940, a fragile truce has been restored on the German-Swiss border. Both sides did not take any hostile actions towards each other. Only occasionally strayed German planes were intercepted by Swiss fighters and forced to land at Swiss airfields. Internment aircraft was included in the Swiss Air Force, but most of it was unsuitable for flying due to the lack of necessary spare parts.

Loudest incident happened April 28 1944, at the Swiss Dübendorf airbase made an emergency landing night fighter Bf.110G-4 / R7, equipped with the latest radar FuG220 «Liechtenstein» and fire installation "Wrong Music" (with the placement of cannons at an angle to the horizon, to firing "bottom-up" - from this angle it was easier to notice the British bombers on the background of a brighter sky). Worse, on board the Messerschmitt was a secret tablet with a list of radio commands from the German air defense system.

The German task force led by Otto Skorzeny immediately began preparations for the raid at Dubendorf airbase with the aim of destroying the fighter and the documents before they fall into the hands of British intelligence. However, no armed intervention was required - both sides reached a consensus by peaceful means. The Swiss authorities destroyed the aircraft and its secret equipment, and in return they were given the opportunity to purchase the latest Messers 12 109G-6 modifications. As it turned out later, the Nazis deceived the Swiss - the resulting fighters turned out to be worn out junk. Engines of all 12 "Messerschmitts" were on the verge of writing off the form of production of their motor potential. Switzerland has not forgotten the offense - in 1951, the Swiss have judicially obtained the payment of compensation. 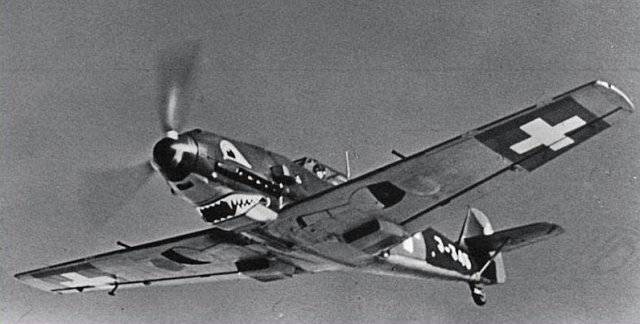 Surrounded by Nazi countries, Switzerland formally continued to pursue an independent policy, maintaining the status of a neutral state. The confidentiality of deposits in Swiss banks has remained an unshakable secret and a guarantor of the security of a small country.

Meanwhile, the air war flared up with a new force. From the middle of the war, Allied aircraft became the main enemy of the Swiss air force.who regularly invaded the airspace of the country. Wrecked and strayed cars were forced to land on Swiss airfields. During the war years, more than a hundred such incidents were recorded. As expected, the aircraft and pilots were interned in the territory of a neutral state before the end of the war. British and American pilots were placed in ski resorts, cut off from the rest of the world by war, mountains and snow.

With the start of the Allied landings in Normandy, around 940 pilots of the Allied countries voluntarily left the place of their imprisonment and tried to cross the border into France. The 183 fugitive was detained by the Swiss police and placed in a POW camp in the Lucerne area with a much tougher regime than before. They were released only in November 1944.

However, not everyone got a chance to settle in an alpine chalet - 13 on April 1944, a damaged American plane was mercilessly shot down in the airspace of Switzerland, despite the fact that it ostentatiously released the chassis (which, according to international rules, meant “following the aerodrome you specified”) . Killed seven Americans.

But the real "action" is associated with raids by strategic bombers - throughout the war the Swiss territory was regularly subjected to bomb strikes. The following episodes are best known:

- 1 April 1944 The Formation of the 50 "Liberators" brought down its deadly cargo to Schaffhausen (instead of the designated target in Germany, 235 km to the north). The victims of the bombing were the Swiss 40;

- 4 March 1945. US strategic bombers simultaneously bombed Basel and Zurich. It is noteworthy that the present target was located on 290 km north of Frankfurt am Main;

The bombing occurred earlier. During 1940, the largest cities in Switzerland (Geneva, Basel, Zurich) were periodically bombarded by the Royal British Air Force. 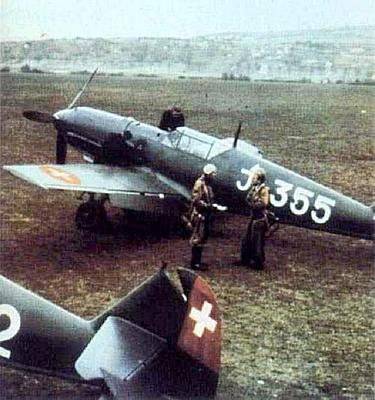 The hapless pilots themselves also suffered losses: at the beginning of March 1944, the Swiss fighters managed to shoot down the “Flying Fortress”; a second bomber of the same type was forcibly planted in Switzerland.

Random or intentional were all these "errors"? History does not give an accurate answer. It is only known that the bombing of Switzerland met with approval from the American pilots: strong pro-Nazi sentiments were spread among the Swiss population, and many of the affected enterprises were directly connected with the military-industrial complex of the Third Reich. The commander of the US Air Force, General Arnold, adhered to the version that most of the episodes with the bombardment of Swiss cities were Nazi provocations using captured aircraft. However, after the end of the war, the Swiss were paid good compensation.

1 July 1945 in London held a demonstration trial of pilots and navigators of strategic bombers who participated in raids on Switzerland. The pilots only shrugged their shoulders and referred to the strong tail wind and bad weather over the target. All were justified.

On the whole, the situation is obvious: in spite of the complexity of relations between Switzerland and the Third Reich, “dark” banking transactions and frank flirting of the country's leadership with the Nazis, there are no complaints about the air force. The actions of the Swiss Air Force coincided entirely with the doctrine of neutrality - any provocations and violations of the air space were stopped by the most decisive methods. At the same time, the Swiss tried not to go beyond international law. None of the warring parties had priority in the case of a meeting with fighters with red and white crosses on the wings. Violators were forwarded to the airfields, who ventured to resist mercilessly shot down. Swiss pilots acted competently and professionally, sometimes bringing down a much stronger and more numerous opponent from heaven to earth.

It remains to add that during the war years, the Air Force of a small mountainous country had more than a hundred Messerschmitt fighters (including outdated 109D, interned vehicles and 12 acquired 109G-6 fighters).

17 February 2014 of the year. Europe is awakened by a report about the hijacking of the passenger Boeing-767 of Ethiopian Airline, on the route Addis Ababa - Rome. As it turns out later, the second pilot, an Ethiopian citizen, who seized control of the aircraft and arbitrarily changed the course toward Geneva in order to obtain political asylum in Switzerland, became the culprit of the incident.

Fighters of the Air Forces of Italy and France were immediately raised into the air, they took the hijacked aircraft to escort - from the moment of its detection to the landing. 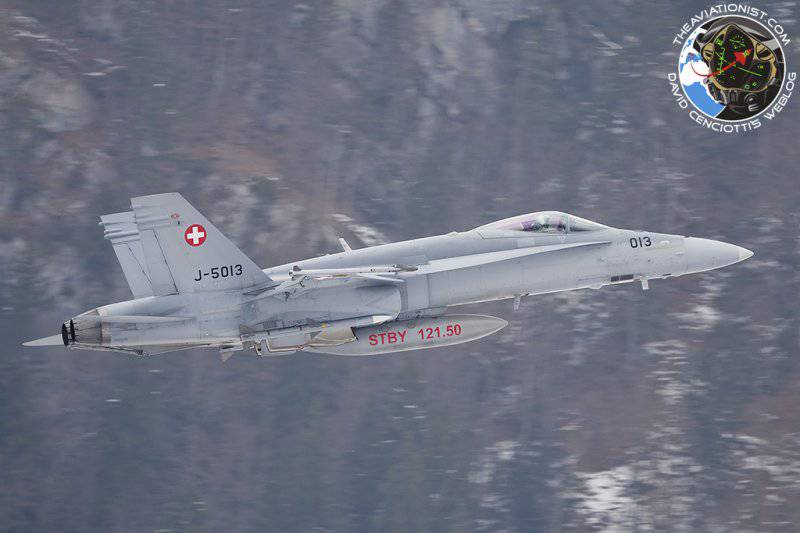 Fortunately, everything worked out - the airliner reached the last drops of fuel to Switzerland and in 6: 00, in local time, made a soft landing at Geneva airport. None of the 200 passengers and crew members on board were injured. The pilot hijacker will soon receive his legitimate 20 years in prison.

But why the escort of a hijacked plane required the help of the Italian and French Air Forces? Where were the gallant Swiss pilots, whose grandfathers bravely shot down German, British and American aircraft, at that moment?

The Swiss "sky captains" at this time were drinking their morning coffee, watching on the television screens the incredible adventures of the Ethiopian "Boeing" in the airspace of their country. None of the 26 multipurpose F / A-18C “Hornet” and X-NUMX Fighter F-42E “Tiger II” Swiss Air Force took off that morning.

The gates of the airbases are locked all night, the flight crew goes home - Swiss combat aviation works exactly from 8 a.m. to 17 p.m., with an obligatory one and a half hour lunch break. The reason for this decision is banal cost savings in peacetime.

From dusk to dawn, the Swiss skies are guarded by the air forces of neighboring countries - Germany, Italy and France, with which the relevant treaties have been concluded. 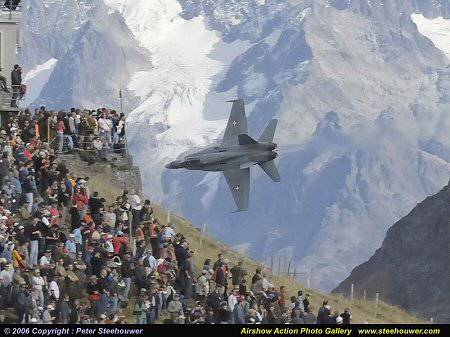 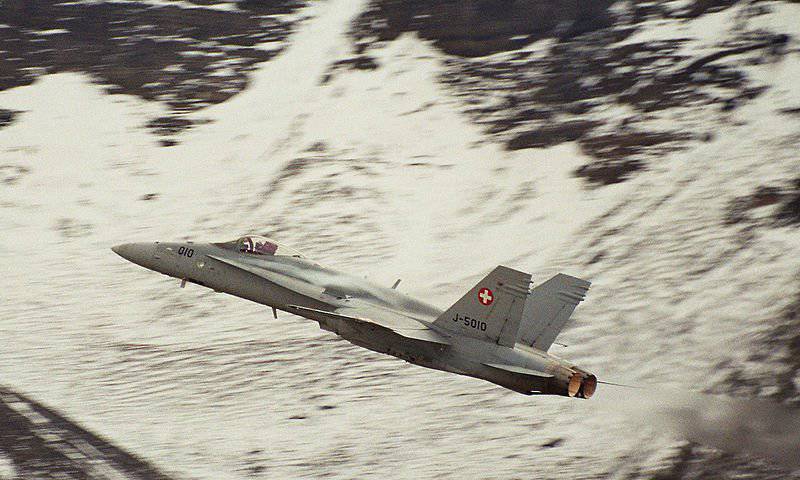 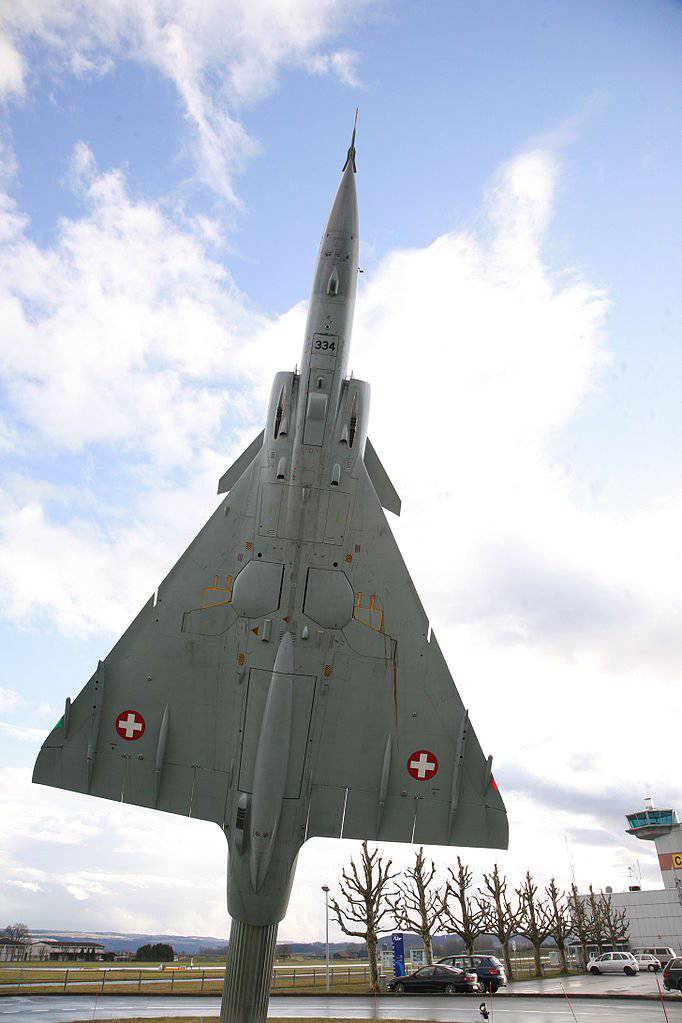