Agents, agents, all around agents 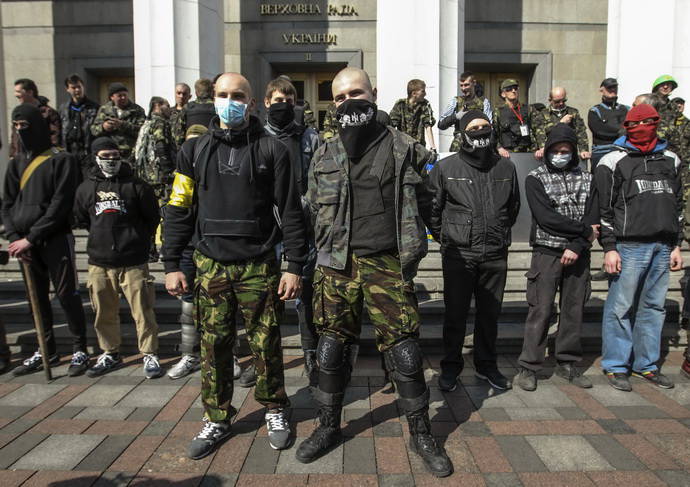 Paraphrasing a well-known expression, if there were no Putin, Ukrainian politicians should have invented it. It seems that after the opposition came to power, absolutely all political processes in the country can be explained by the “hand of the Kremlin”.

Justified by the need to repel “Russian aggression”, the new government now has carte blanche for the adoption of virtually any laws and the introduction of measures that would have caused a storm of indignation in the pre-modern era, and during the Maidan they would most likely cause another attack . Remember how much noise was after the adoption of the so-called "draconian laws" of Yanukovych? And now the registration of the Law on Preventive Detention, which allows people to be detained without evidence, only on suspicion of preparing or committing “crimes against the foundations of national security”, caused only a few sluggish pickets and a couple of critical articles.

The increase in gas tariffs for the population by 50%, the freezing of the growth of wages and pensions is also the fault of the Kremlin, and not at all of the IMF, which agrees to grant a loan only on such conditions. So what if Russia provided a loan to the previous government without such conditions, and even a gas discount - it was a bribe, and the new honest government does not take bribes. Increasing tax pressure on business, cuts in social sector financing - it is clear to everyone who is to blame. And in general, as they will quickly explain to you, this is not the time to criticize the authorities, when Russian troops have already occupied the Crimea and are standing on the border of the south-east. Here we will defeat Russia, then we will criticize, and who disagree is a separatist, a collaborator and the Kremlin provocateur in general.

By the way, this is another side of the coin, more fascinating - the search for Kremlin agents. Apparently, about 90% of politicians, organizations and public figures work for the Kremlin, but they either cannot agree with each other, or are so secret that they do not know about each other, or simply enjoy the chaos that is happening. Now any action discrediting the power and "ideals of the Maidan" is attributed to the agents of the Kremlin. A group of deputies led by the “svobodovets” Miroshnichenko rushes into the office of the director of the NTU, beats up and forces him to write a letter of resignation - of course, they work for Putin. True, both party comrades and the country's leadership do not particularly insist that the saboteur should surrender his mandate and be punished for his actions, it seems that this cunning agent was able to carry them out. Surely the certificate of the major of the FSB is hiding in the cache and Irina Fahrion, because a dozen pro-Russian journalists will not be able to regularly provide such materials for the “Putin's media”.

Interestingly, in the public mind, the label "agent of the Kremlin" can change the owners within a day. Take, for example, the murder of the infamous Alexander Muzychko, nicknamed Sashko Bily. As soon as the press first appeared news about his death, democratic bloggers immediately saw this as the work of the FSB. “But I say to everyone, and I say it now in public: this is not Avakov. This is the Kremlin. Avakov did not commit a murder to think about the Kremlin, and the Kremlin first launched an informational virus that Avakov is preparing to kill Bilogo, and then he was really killed. So we started a small civil war here. In order for the brutal Right Sector to overthrow the existing, podonchesky, but nevertheless legitimate power, and the Kremlin had a reason under the pretext of "protecting the Russian-speaking against the brutal Bandera" to devour another piece of Ukraine "- this is a typical post in the first hours after Bilogo's death. 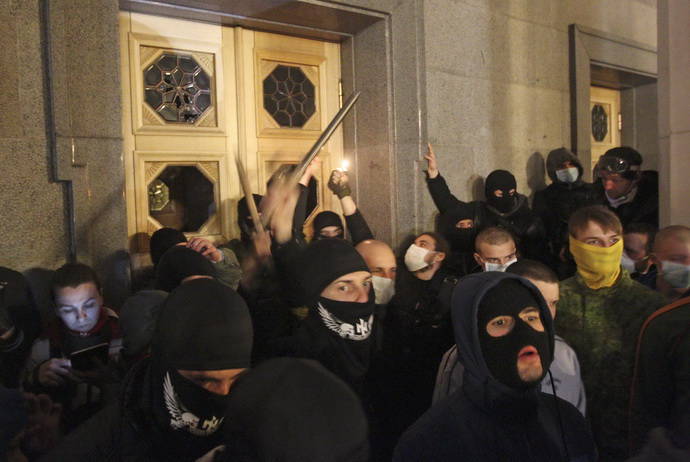 When, a few hours later, the Interior Ministry took responsibility for the operation on itself, Arsen Avakov himself quickly turned into a "misguided Cossack" of the Kremlin. He specifically ordered to kill Muzychko in order to provoke the Right Sector, destabilize the situation in Ukraine and give Putin a reason for invasion.

Since they need to be provoked so radically, it turns out that at least in the Right Sector remain honest fighters for freedom, equality, fraternity, of course, among ethnic Ukrainians? You're wrong: most liberal supporters of Maidan will tell you that the “Right Sector” is the main project of the Kremlin. That was what was read in hundreds of posts and comments on Facebook after yesterday’s attempt to assault the Verkhovna Rada with “pravoseki”. After all, both the intelligentsia and Western politicians assert that there are no “Bandera” in Ukraine, this is all Kiselyov’s propaganda and fantasies. There are even a lot of jokes and pictures on the Internet, for example, “Stells-Bandera - no one has seen him, but all Russians are terribly afraid.” And the “Right Sector” with its sashka, bats, masks and assaults does not fit into this bucolic picture. It means that it works for Moscow, it specifically creates a visual line, so that it has something to show in the news of the First Channel.

True, for some reason no one accused the Right Sector of working for Putin when, during the protests, they were the main striking force and seized the buildings for the rally. But now they are reminded that not a single member of the organization was among the dead on the Maidan. What happens if some of the most active participants in the Maidan act on the orders of the Kremlin, then the Maidan was only Putin’s cunning plan to seize the Crimea? From such reflections, the mind can go for the mind, which, apparently, happens to many. 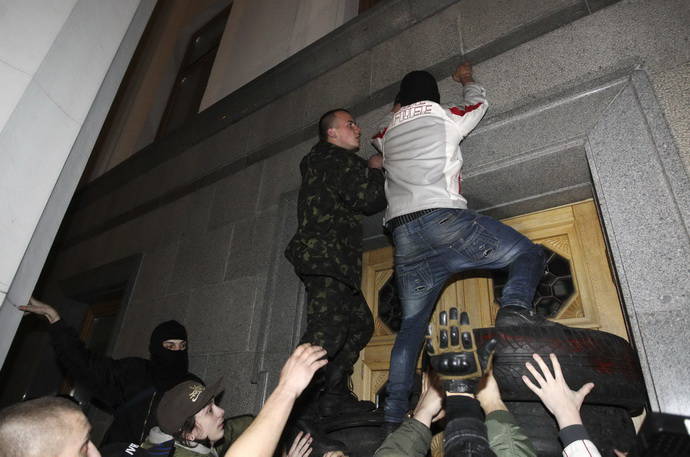 If you try to bring the mind back to its place, a strange picture emerges. The “Right Sector” appeared a few months ago almost nowhere and immediately became a formidable force that not only ordinary citizens, but also the previous authorities, began to fear, it suffices to recall Dmitry Yarosh’s secret visit to Viktor Yanukovych for some negotiations. Now, when the new government unceremoniously eliminated one of the leaders of the movement, Alexander Muzychko, the “pravoseki”, it would seem, should demolish the people they planted in the high armchairs.

But in fact, a lot of noise came out of nothing. "Right Sector" demanded to fire Arsen Avakov and put frightening ultimatums. Loudly announced the assault, and all ended with a couple of broken glasses and shouts under the Verkhovna Rada. And today, the "pravoseki" did not show themselves. This suggests the idea that they may indeed be agents, but not of the Kremlin, but closer to us Bankova, or where the center of the new government is now.

It is very convenient to use it is not clear that it represents the "Right Sector" to frighten both opponents and the public. And you can frighten both the radicals and the "Agents of the Kremlin", depending on the situation. For example, today Alexander Turchinov said that yesterday’s events under the Verkhovna Rada were an attempt to destabilize a country that plays into the hands of Moscow. Meanwhile, while there is a search for spies and playing the “Right Sector” card, no one bothers to grow and develop other right-wing movements that will not be so easy to control and that can become a real rather than an imaginary threat.

Unfortunately, sympathizers of the Maidan and its consequences, as before, prefer to close their eyes to the growth of right-wing sentiments, reassuring themselves that all this is just a political technology project. But if Freedom, Right Sector, Arsen Avakov and others are Kremlin agents, in their opinion, who is fighting the “Russian threat”? Perhaps, Arseny Yatsenyuk and Alexander Turchinov? And they didn’t guess it again - from the very beginning of the Crimean events, the version according to which everything that is happening in reality follows the scenario agreed with the President of the Russian Federation is very popular. Allegedly, the new government has reached an agreement with Vladimir Vladimirovich - they give him the Crimea, and he allows them to do with Ukraine everything their heart desires. That is why the peninsula was so stupidly surrendered, therefore the West is limited to only statements, and Russian troops do not go further.

It turns out that there is no own political process in Ukraine, everything is decided not here, but in the Kremlin, it is not clear just why break a comedy, if everyone works for Putin anyway? There would be no turning up the "Lube" louder and go hugging with birches ...

In fact, all these searches for “agents of the Kremlin” and attempts to explain by their actions everything that does not fit into the myth of the ensuing freedom and democracy, argue in the thought that modern Ukrainian society, despite all the achievements of progress, is increasingly slipping into the medieval worldview. And the search for “Kremlin agents” and the desire to see “Putin’s hand” everywhere is akin to the attempts of a medieval peasant to explain everything bad and incomprehensible to witches and machinations of the devil.

Ctrl Enter
Noticed oshЫbku Highlight text and press. Ctrl + Enter
We are
About Stalin and KhrushchevMilitary reform as an integral part of the security concept of the Russian Federation: Systematic dynamic assessment
Military Reviewin Yandex News
Military Reviewin Google News
87 comments
Information
Dear reader, to leave comments on the publication, you must sign in.