Darth Vader vs. Rabinowitz. On the political situation and the presidential race in Ukraine

March 31 2014
141
Less than two months remain before the “bright and festive” day for Ukraine, which is called the day of the presidential election. Recall that the presidential election in a neighboring country is scheduled for 25 May this year. There is very little time, and besides, the situation remains unclear, which form of government is currently implemented in Ukraine, if any form is realized at all. 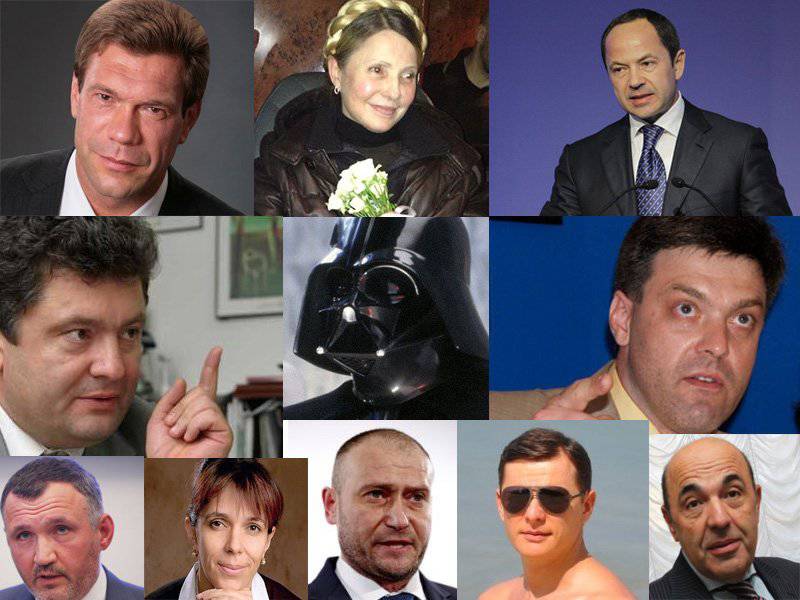 De jure, Ukraine seems to remain a presidential-parliamentary republic, but de facto the state was called parliamentary-presidential, in which the lion's share of power is concentrated in the hands of the government formed by parliament. As a result, at the moment Ukraine has one legitimate president who escaped from Ukraine, plus one self-proclaimed acting president, Mr., who seized upon the government in the wake of a coup d'état.

In addition, Ukraine has a cabinet of ministers whose members were appointed in an amazing way for the present - through shouts of approval or disapproval of the crowd on the Maidan (this is even, sorry, not a SMS vote ...). Moreover, “appointments” were made in reality long before the “candidates” were brought to the central square of Kiev. They approved these candidates ahead of time through the US diplomatic mission, subsequently playing the comedy "people's veche". The comedy is also in the fact that people who represented about one hundredth of a percent of the population of the country "approved" the candidates. And even one hundredth of a percent even in elections can become a kind of statistical error that can provoke a vote recount so popular in several countries of the world (including Ukraine). That is, the Ukrainian government is based on the interests, if I may say so, of “statistical error” ...

In Ukraine, according to "official Kiev", now there is also a "Constitutional Court". This is generally surprising by modern standards "community". 12 judges from the Constitutional Court of Ukraine were prosecuted for allegedly violating the oath, while declaring the new Ukrainian “authorities” to dissolve the Constitutional Court. Dissolution first took place, then decisions were partially suspended. The result was something that called the full-fledged COP language does not turn. The chairman of the Constitutional Court on the new traditions of Kiev is not, but there is an acting chairman. The quota for the appointment of judges by the president of Ukraine does not legally work, since it is completely incomprehensible which president of Ukraine today should use his quota. Turchinov enjoys, but he is, in fact, the same president as, for example, Obama is a peacemaker ... He is “like a peacemaker”, this “as if a president”. Hell, Yanukovych could also contribute his share to the formation of a new CU, appointing, according to his quota, new judges working somewhere near Rostov (“in exile”) ... Although it would be great to waste time on trifles in Rostov-on-Don to translate the bodies of the legitimate state power of Ukraine, arranging a remote control option. So what? Kiev is controlled remotely from Washington. So why not oppose Washington to our Rostov ...

A separate question is the current Verkhovna Rada of Ukraine. This is a “legislative” body, which in its work, it seems, is not going to be based on any legislative and legal norms. Moreover, if the right decision by the top appointees of the Rada cannot be promoted from the first time, then the deputies who became oppositionists suddenly shouting “Vote, s..a, and then send it to the Maidan”, rushing from the mouth of “colleagues” from “Blow”, “ Freedom ”and“ Batkivschyna ”will vote until the decision is finally displayed on the scoreboard. A sort of democracy to exhaustion. They vote to the loss of consciousness ... It was in such a “democratic” way that all the delusional laws of recent times appeared, from reading which any normal person could play a smile on their lips if everything were not so tragic for Ukraine.

It is against such a unique background that Ukraine is going to hold presidential elections. Moreover, the number of candidates in the elections 25 May 2014 of the year can break all records. It is worth listing those who have already announced their presidential ambitions.

So here is the list with some characteristics of candidates or potential candidates.

Olga Bogomolets. That Olga Vadimovna Bogomolets, doctor of medical science and honored doctor of Ukraine, who told Estonian Foreign Minister Urmas Paet about who exactly was behind the snipers on the Maidan. The pilgrim during the hot events on the said Maidan was a kind of head of the medical service, coordinated the provision of medical care. And this medical care, as you know, was far from all victims. For example, the soldiers of the "Berkut" medical care was simply forbidden. Shots with the disfigured fighter of "Berkut" lying on the ground, spread all over the world. And the words of people in the frame, saying that no ambulance is necessary, will be remembered for a long time.
Yulia Timoshenko. In the recent past - the main carer of Ukraine, a woman with a scythe, the main disabled person Square. In the harsh present - Mrs., calling to shoot Russians in eastern Ukraine from nuclear weapons, and from Russia to leave a scorched field. Mrs., who is going to fight corruption, while having at least five objects is not cheap real estate. These objects, as well as bank accounts, cars, and other assets are estimated today at about 9 billion hryvnia (800 million dollars). Such figures are offered "for reflection" by an American company. "UTICo" .

Yulia Vladimirovna herself declares that she simply rents all expensive real estate. She rents it, for example, an elite private residence in Koncha Zaspa (in the village of Silver Bay), whose total area is five hundred square meters, the size of the land plot is 1 ha, with access to the picturesque Dnieper Bay. but Ukrainian journalists found out that the mansion is not rented at all, but belongs to the family of Mrs. Tymoshenko.

Yulia Tymoshenko's rating, according to Ukrainian public opinion monitoring services, is 8,2%. Although a couple of weeks ago, the rating reached 19%. Is it not Yulina’s words about the use of nuclear weapons against the Russians in Ukraine? ..

Dmitry Yarosh is preparing to fight for the presidency, which promotes the position that Ukraine should become a fully self-sufficient state, based on the ultranationalist, and in fact, on the Fascist principle “Ukraine for Ukrainians”. But after the death of one of the closest comrades in the "Right Sector" Sashko Bilogo and after official statements by Ashton about condemning the abuses of the PS in the center of Kiev (near the Rada building), Yarosh's candidate attempts were, to put it mildly, blurred. Is that why Yarosh decided to go to the presidency separately from the “Right Sector”, stating that he is a self-promoted person ... A conspiracy of level 80!

Presidential ambitions decided to implement such a person as Vadim (aka David) Rabinovich - the head of the WJC (All-Ukrainian Jewish Congress). Rabinovich - the gentleman who, after the coup d'état in Ukraine, began to declare that there were no manifestations of fascism in the country, and that swastikas in synagogues, attacks on Jews and offensive neo-Nazi torchlight processions are all “external provocations” ... And Rabinovich expressed these words through a few days after the chief rabbi of Ukraine called on Jewish families to leave their homes for a while if they were in places where the conflict escalated. Neighborhood Yarosh and Rabinovich in the list of candidates for the presidency of Ukraine - this is a lot ...

In hard thoughts before the congress of the party "Blow" was Vitali Klitschko. Before the congress, the billionaire Poroshenko (one of the sponsors of euromaidan) made to him, apparently, an offer that the boxer, who was eager for gray-green candy wrappers, could not refuse. Now Poroshenko is a candidate for the presidency of Ukraine, and the man from the ring is content with the candidacy for the post of Kiev mayor. Will "reclaim" the pigsty in the center of the capital.

The desire to run for president was announced by the leader of the Freedom Party Oleg Tyagnibok. At the same time, Tyagnibok at the congress once again “conquered” his supporters with grandiose plans. If he is elected president, Tyagnibok promises to ride a tank in the form of his party on Red Square ... Well, well ... Firstly, does this tank start at all? Secondly, not so old stories there was already a man who, along with tanks, pulled onto Red Square. If we are guided by such analogies, then perhaps it would be more correct for him to take poison today ...

Presidential marks Mikhail Dobkin. The question is, how Dobkin is going to restore order in the country in the event of a miracle victory in the presidential election, if he could not ensure order in a single Kharkov? .. By the way, Dobkin goes to the polls with a program that is going to return Crimea. To this we can say the following: thanks, Crimea, you have already returned to us ...

They are going to the presidency also such people:

Well, in the nomination “full out”, undoubtedly, Darth Vader, whose candidacy for the presidential post is nominated by the Internet Party of Ukraine, wins. Reports the edition about it "Ukrinform"
But for Hochma, Ukrainians may well vote actively for Darth Vader, who in his program promises to "put down the Jedi uprising," "raise pensions and salaries to the space level" and "give the Sith language the status of a state." Well, why, in fact, Darth Vader for Ukraine is worse than the same Tyagnibok ...

I will express my modest and pointless point of view. If in this kaleidoscope we single out the “pro-Russian candidate,” then this is Oleg Tsarev. How much he is able to consolidate the current Ukraine is already a separate issue, especially considering the mood of the western regions. Well, and with the misinformational harassment that today is going on with respect to Russia in the vastness of ukroSMI, soon any pro-Russian candidate in the neighboring state will be a priori perceived as an “enemy of the Ukrainian nation”. So you don’t envy Tsarev in this respect, but since I took up the tug ...

Only now, it seems that any of these candidates, having received the presidential post, is unlikely to be able to truly unite the people. Tsarev is good for the east, but unacceptable for the west of Ukraine. Yarosh will get a lot of votes in the west, but he will be cast aside with rotten eggs in the east. And so in relation to each ...

Ctrl Enter
Noticed oshЫbku Highlight text and press. Ctrl + Enter
We are
President of Ukraine will be Poroshenko, not Darth VaderResults of the week. “I saw a lot of psychos, but this place is a reserve”
Military Reviewin Yandex News
Military Reviewin Google News
141 comment
Information
Dear reader, to leave comments on the publication, you must sign in.