Do you know that in Ukrdom girls are beaten in broad daylight in the basement? 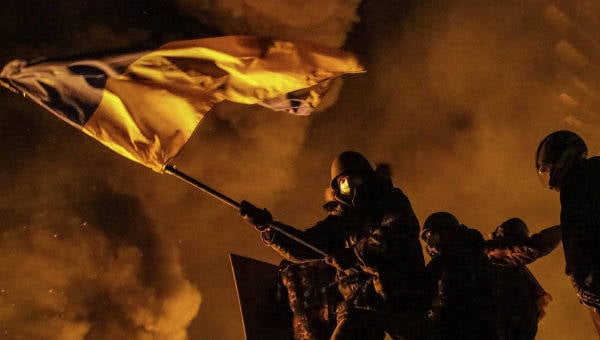 The wife of one of the leaders of the Maidan of the super-visionary Dmitry Reznichenko, Victoria Reznichenko, writes:

Do you know that in Ukrdom girls are beaten in broad daylight in the basement? Not? Well, I'll tell you now. Just returned, and literally shaking with rage and powerlessness. This time they did not bother me, but with the same success, too, could not return. Until the last, I didn’t want to believe in different scarecrows, but what I saw and learned today is just hard.

To begin with, now the Ukrainian House is really not allowed anyone without a pass. I was told at the entrance: "It is impossible". Given that I was on the case in the Anti-Corruption Bureau. I had to call a friend so that she came out and picked me up with fights.

But if an ordinary person comes with his own problem, and he has no girlfriend there and no phones, he is not allowed in. And what should he do? To complain? By the way, two 17-year-old girls stood next to me and asked to go to the library. They were never allowed.

This is supposedly for the security of hundreds of combat. And before they were not there? There were, indeed, combat situations: the guys were on duty at Grushevsky at night and were waiting for an assault at any moment. Once, at about three o'clock in the morning, someone bored out of fireworks and started the whole third floor and then ran off. And nothing, the girls were missed for a smile.

In general, with difficulty, but I still got inside. The anti-corruption bureau keeps a mansion and at any time expects them to be asked to leave. Given that these people are not forced with batons, but are engaged in business, and they would say the most important thing today. But for the main ones there they are not, and not avtomaydan, and not even any deputies. And a certain 31 hundred. What methods they "manage" I realized when I left the bureau.

A girl was led down the hall. She was alone, theirs is a 15 man. All such formidable, in berets and camouflage. The girl did not look drunk, was completely civilized, and does not look like a shahid woman. She tried to resist, asked to be left alone, but in response she was kicked in the back, almost pulled down the stairs and sentenced (sorry, but literally): "Come on, bitch!"

Such a nightmare, that hair on end. Especially when you realize that nothing can help. I ran after them to even ask what did she do wrong, but the escort quickly disappeared into the bowels of the basement. Nearby it turned out to be two smacked uncles. "In the 30-th room led?" - asks one another. "Yes, for sure." "And for sho?" "Yes, maybe she stole something, maybe no ..."

A little later, I found friends with whom I was on duty during the Revolution, and they told me that there was even a joke in the style of Soviet posters among the locals: "Have you already been to the 30 room?" You can laugh. One buddy himself barely otmazalsya. They say that the torture is almost always busy, and 99% get there for just that. "Someone who has drunk is caught, then with an accent ..." Young people are having fun.

From that Ukrainian House, which I remember - motley, noisy, cheerful - nothing left anymore. All humanitarian aid (by the way - excellent, I dug out my lovely trousers there) just thrown out onto the street. They drove out the "Student Assembly" and the "Free University", which conducted free film screenings and lectures. Just yesterday, they broke up the Orthodox kaplyutsyu. What did the priests get in the way?

So there now is deserted and anxious. On the bird rights sit only doctors without medicine, "Mystetska hundred" and "Library of the Maidan." But, again, what is the use of the library, if readers cannot come there? People can't even bring books from home, because they need a pass. It is believed that the library now operates exclusively for local fighters. And this is, you know, solid academics.

The same with the "Mitz". Because of all the forces, they are holding on to their piece of territory, but, of course, no movement takes place. I ask: "Why are you sitting here at all? Why won't you move anywhere?" "Yes, we expect that sooner or later the building will be given back to the state, we may be left, and then it will be easier ..."

While we were talking with friends, we occasionally heard terrible screams. With something from above, then from below. It seems that on each floor at the same time a person was killed. "What's happening?" - I ask. "But who knows ... It’s still nothing, the real fun is happening here at night."

Tonight, two fighters quarreled about something. Then one fighter pointed a gun at the other. The second fighter got upset, grabbed a steel baton and smashed his head to a comrade. Beautiful life is not forbidden.

But once the Ukrainian House was the cultural headquarters of the Revolution, it was the brightest, cleanest and most pleasant place on the whole Maidan. Why now it was occupied by some monsters, and turned into a totalitarian barracks with a torture chamber? What is going on?
Sorry that there are so many words - I wanted to immediately tell all that is possible and impossible. Moreover, after this entry, I still do not enter Ukrdom closed. Rather, on the contrary - 30-I room will be waiting for me with impatience.

https://www.facebook.com/permalink.php?story_fbid=287364044755060&id=100004444000759
Ctrl Enter
Noticed oshЫbku Highlight text and press. Ctrl + Enter
We are
A great interview with Sergey Lavrov: about Ukraine, Obama and IranWhat you didn't want to know about England
Military Reviewin Yandex News
Military Reviewin Google News
97 comments
Information
Dear reader, to leave comments on the publication, you must sign in.