It's time to quietly forget Kiev 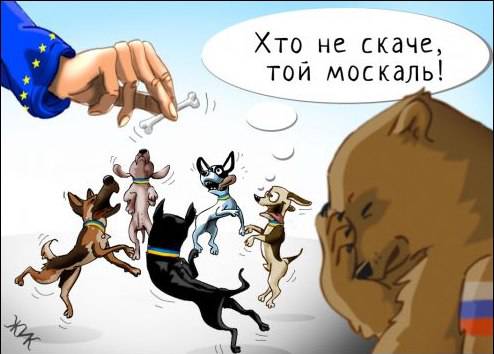 It seems to me that the Ukrainian revolution has entered the phase of either a withdrawal or a hangover. This phase is inevitable when a revolution, like the desire to get drunk, is not a means, but an end in itself. The birth defect of the Ukrainian venture was in the flawedness of the very idea, which initially consisted of two positions: "Ukr is not Moskal", "Moskal must be informed about this every minute."

That is why they never built their national project, but only jealously flirted with them in front of Russia. The process of leaving Russia became the only meaning of everything: it is important not to leave, but to leave. That is why, for the third time in the last quarter of a century, they have been revolutionary, but they will not.

And now, instead of building, by inertia, they gather for military feats, turn off external sources of information and pump themselves up with warlike foolishness about the fact that the enemy will not reconcile with their Euro-selection. In actual fact, the departure of the Crimea to Russia is the recognition of your right to choose. Only the East is in question - but it depends on you. For there is a feeling that, having learned the bitter truth - Moscow REALLY didn’t care about your Euro choice - you will start to recoup in Russian. To return the desired attention of Moscow, without which it is unusual.

After all, without this attention, you will have to do what the creepiness doesn’t want to do: build a beautiful democratic, non-corrupt European non-Muscovite state. This attracted to the Maidan, but there is a suspicion that the list of real cases, it never appeared.
The program of national rescue boiled down to several points:
1. Capture Yanukovych's toilet bowls.
2. By jumping to confirm that we are not Muscovites.
3. Require the help of the West.
4. And to mobilize endlessly for war with those who want to take away Yanukovych's toilet bowls.

It was believed that before the theoretical point of 5. “To build a garden city” the matter will not come anyway: the enemy will come and will interfere. Well, it cannot fail to come: after all, without him nothing will come of Eurasia, the empire will fail, it will burst with envy.

But time passes, and the enemy, on the contrary, does not. And then the Elusive Joe began to suspect something. The West also saw the light: “Russia does not dare to attack the East!” Translated from the diplomatic: "Well, please attack the East, otherwise we do not know what to do with them!"

I think that now we ourselves need to reduce the information activity about Ukraine in a multiple. To talk about the Crimea, about the Russians in the East, but quietly forget Kiev. And then we have a musical Sashko right news No.1. Yes he went. We rejoice that this is not our problem. We now equip the Crimea and sanctioners need to calm down.

And it is time for them to stop preparing the militia and to indulge themselves with illusions that the Crimea is about to return, because Lady Ashton will frighten Putin with his face, and - finally, forget about Moscow. The main way to punish her is to build a beautiful garden city. To Moscow wiped. To the East did not look to the side. To the Crimea sobbed bitterly (well, how the referendum will hold again, shocked by your success?). War does not win, so win the world. West (= whole world) for you. Moscow is ready to be on the sidelines. Dictatorship and oligarchy (again) overthrown. In general: greenhouse conditions. So go ahead and with music - to heaven! Well, or where there Muzychka waiting for you ...