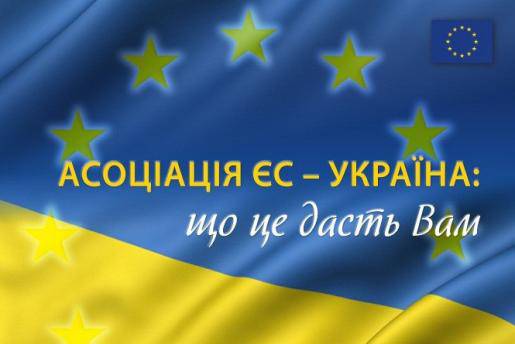 The signing of the political part of the treaty with the EU was almost a week ago. But current events did not give me the opportunity to quickly respond to this action. However, a few days later, this topic has not lost its relevance.

And we begin, perhaps, with an eloquent quotation from the famous edition of the Sunday Telegraph.

“EU leaders can hardly afford to be too aggressive when the EU imports 30% of its natural gas from Russia, - noted in the article Sunday Telegraph. - TSo Ukrainians are caught between a rock and a place that is too soft to help them. 21 March, when their acting. Prime Minister Arseniy Yatsenyuk arrived in Brussels to sign the Association Agreement, the EU was so embarrassed that the ceremony had to be held behind closed doors, not in front of the media.

The poor fellow was not even given a microphone, he had to shout out his wish to see Ukraine as a member of the EU ”, - writes Sunday Telegraph.

The first part of Marlezonsky ballet

In fact, the EU has an association agreement with several dozens of countries, for them it is a meaningless routine. It was the Ukrainian opposition that fanned out of this something special, so that there was something to tell their “lohtoratu”. Well, and the European commissioners just played along a bit, because it was profitable for them.

After all, initially all this movement around the Association Agreement with the EU was conceived from the European side solely as a way to “sniff” Ukrainians with more European goods, and preferably duty-free. Only in the process it turned out that the overwhelming majority of Ukrainians are insolvent, and even loans cannot be used to stimulate the consumption of European goods, since the country (and the state, and corporations, and the people) are already credited in full.

And all this “European integration” has become for European commissioners like the fifth wheel of a cart - and it’s hard to bear, and it’s impossible to quit — they won't understand (there will be image losses). Especially since the moment when the temporary government of Turchinov came to power on the shoulders of ultra-right militants from the Right Sector and other nationalist groups.

Europeans are terrified that all these crowds of militants in helmets, masks, body armor, with batons and machine guns want to integrate into them. But not only from the militants they are terrified. Numerous delegates and deputies who now travel to Brussels and various European capitals with the phrase “Neither mange and system jour”, inspire them no less than fear.

The EU has huge financial problems, which they wanted to tweak a little at the expense of the gullible natives, and here it turns out the opposite - the natives expect to solve their problems at the expense of the EU. In Europe, no one counted on and did not sign. But also to send obsessive petitioners directly is also somehow "unreasonable."

The second part of Marlezonsky ballet

What is the political part of the Association Agreement with the EU, signed by Yatsenyuk in Brussels?

Actually, since the contract is initially trade and economic, without its economic part it’s just a collection of beautiful words about friendship, chewing gum andGive your king our heartfelt greetings. ”.

The same moments that really affect something, frankly not to the benefit of Ukraine. So, in a number of areas duties have been abolished (which seems to be good), but restrictive quotas have been introduced. The quota for the export of grain is called at the level of 2 million tons with the capabilities of about 3,5 million tons. That is, the benefits of reducing duties are rather doubtful.

Another example is the export of sugar. Earlier, Ukraine exported about 100 thousand tons of sugar per year, but now the quota is only 20 thousand tons. A similar situation is observed in some other industries.

As a result, Europeans will buy Ukrainian goods at reduced prices, but also in smaller quantities. And this is a reduction in exports and a further deterioration in the trade balance (which is already terrible).

The third part of Marlezonsky ballet

Meanwhile, the Cabinet has prepared a new, revised version of the main macro-indicators of the economic and social development of Ukraine.

According to it, the economy is expected to fall on 3% and high inflation at the level of 12% (which is, in fact, extremely optimistic). The previous government expected GDP growth of 3% and inflation of 8,6%.

According to the government's forecast, nominal GDP will be 1,574 trillion UAH, not 1,653 trillion UAH (respectively, revenues to the budget will be reduced, increasing its deficit).

The unemployment rate will rise to 8,2%, and the number of working citizens will be 20,15 million. At the same time, taking into account the expected inflation, the nominal wage will be reduced by almost 5%.

Imports of goods to Ukraine are projected at $ 95,3 billion, exports of goods are $ 82,7 billion. The trade balance, according to the Cabinet of Ministers, will be negative and will be $ 12,6 billion.

Immediately, I note that with all the pessimism and gloominess of this forecast, the reality may be even worse. Exports will definitely be lower - since the EU introduces quotas, and the Russian Federation periodically blocks the supply of Ukrainian goods to its markets (which is more than a quarter of all exports). Therefore, the trade balance will be even worse.

Moreover, the value of imports exceeding 60% of GDP is a terrible dependence of the Ukrainian economy on external suppliers, making real sovereignty impossible. In the same neighboring Russian Federation, this indicator ranges from 10 to 15%, and these are mainly non-critical luxuries, most of which can be dispensed with.

Separately, you need to pay attention to the fact that most analysts are ignoring today - GDP was calculated from the dollar rate in 8,25 at the beginning of the year and its further growth by the end of the year to 8,5-8,8 UAH / dollar. And today on the interbank rate is already 11 or even 11,1 UAH / USD. Accordingly, in fact, GDP in dollars will fall to 25-30% by the end of the year (this is if the dollar does not continue to grow further).

Well, as we can see, the government needs to find at least 12,6 + 7,3 + 2 billion dollars by the end of the year (to cover the trade deficit + current debt payments + payment of debts for gas). That is, in sum, in modest terms, about 22 billion dollars. And all the credits promised by the West, even if it is fully secured (which I doubt), will be only about 11 billion, that is, only half of what is needed.

And if for the hryvnia it is still possible to start inflation by turning on the machine, then this number will not work with the dollar.

The fourth part of Marlezonsky ballet

Why am I so skeptical about European loans? Because according to paragraph 3 Art. 106 of the Constitution of Ukraine “The President represents the state in international affairs, he said, he is responsible for the political and political affairs of the state, internal agreements of Ukraine».

Therefore, the papers signed by Yatsenyuk in Brussels mean nothing, they have no legal force. And they can be challenged in any court and declared invalid at any time.

And since we don’t actually have a President, and the powers of the “acting” in accordance with the Constitution are greatly curtailed, any debts taken by this government, sales contracts and other transactions and agreements concluded by this government can also be declared invalid.

Therefore, no one will give real money under ghostly obligations. Because tomorrow can come any new government that will say “Temporary, slaz” and “To whom did you give money? Impostors? ”and then no one will prove anything to anyone. And in the EU or the IMF they understand this perfectly ...

Ctrl Enter
Noticed oshЫbku Highlight text and press. Ctrl + Enter
We are
What you didn't want to know about EnglandInterview by President Bashar Al-Assad to the Sunday Times
Military Reviewin Yandex News
Military Reviewin Google News
69 comments
Information
Dear reader, to leave comments on the publication, you must sign in.