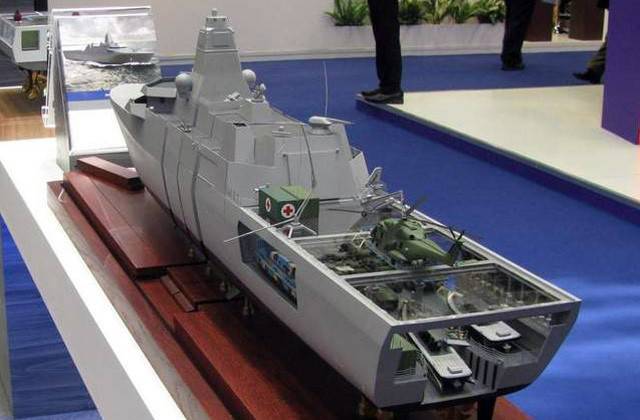 The developers from the Netherlands presented at the naval exhibition DIMDEX in Qatar a model of a new warship. According to Defense News, Mission Flexible Combatant (MFC) has become one of the most exciting new products of the annual exposition.


This multifunctional military ship, designed in the shipyards of the Dutch shipbuilding company Damen Schelde Naval Shipbuilding (Damen), is created for the needs of relatively small fleets. In its concept, it resembles the Danish control and support ships of the Absalon type, armed with large-caliber guns and rockets and having special compartments in the hold for transporting military equipment.

However, there are fundamental differences. “The whole difference is in the aft part,” explains one of the MFC designers, Koen Odenaer.

The Dutch ship is smaller than the Danish, its design is “simple but elegant.” Unlike Absalon, a special ladder was made in the MFC feed, which allows you to receive or send boats or small landing ships directly to the sea.

Holds can be prepared for setting mines and mine clearance, dropping depth charges to combat submarines and for the deployment of paratroopers. The equipment is delivered to the lower compartments with the help of two block cranes located on the upper deck.

The project provides an opportunity to take into account all the requirements of potential customers, including the size of the future vessel - the developers report that they can even vary the length of the vessel, from 115 meters to 139 meters, if necessary. The specialization of the ship also varies: it can perform tasks from simple coastal patrols and escorts to participation in combat operations, including the hunt for submarines.

The Dutch hope that their project will interest those Gulf states that are looking for a way to strengthen their naval forces at the expense of low-cost modern ships, the newspaper notes. Earlier, the military from the United Arab Emirates (UAE) was interested in surface ships capable of resisting submarines.

In 2007, Iran put into service two classes of mini-submarines capable of operating in the shallowest places of the Persian Gulf, which causes serious concerns of other countries in the region. For several years, the UAE authorities have been considering various ways of dealing with Iranian ultra-small submarines such as Ghadir and Nahang in the event of a probable conflict, Defense News explains.

The option of unmanned combat ships was discussed, but it was considered ineffective. “Self-guided ships have not yet proved that they are a viable weapon against combat mini-submarines. We need ships with crew and technical capability to track down and pursue these submarines, ”Vice Admiral Ibrahim al-Mushreh, Commander-in-Chief of the United Arab Emirates Navy Commander, reported last November.

The build-up of flotillas in the Persian Gulf is due to the struggle for regional leadership, explains the director of the Center for Socio-Political Studies, Vladimir Evseev.

“Confrontation in the region is not waning. Iran controls the islands in the Strait of Hormuz, claimed by the United Arab Emirates. The Iranians can close the strait through hidden mining, but this option is unlikely, as long as they simply increase their presence. Now Iran is creating ultra-small submarines, as well as increasing the capabilities of its sea-based missiles, now their range reaches 200 km, ”he told the RP.

In his opinion, the “excessive” presence of the American military leaves its mark on relations in the region. “Now there is no provocation from Iran. It used to be that the Iranian boats imitated a rocket attack on an American ship. Now, some Arabian monarchies, for example, Saudi Arabia, thanks to the US, feel their security, which is superimposed on the struggle in the region, including the sea, ”the expert believes.

Ctrl Enter
Noticed oshЫbku Highlight text and press. Ctrl + Enter
We are
Rescue ship "Igor Belousov"Designers from the UK presented the concept of a warship of the future
Military Reviewin Yandex News
Military Reviewin Google News
9 comments
Information
Dear reader, to leave comments on the publication, you must sign in.