April 27 2013
275
How effective is Cornet in defeat tanks M1A1 and M1A2? What is the survival rate of these armored vehicles when fired?

Tank "Abrams" has a classic layout scheme: the main armament is placed in a rotating turret, the control compartment - in the bow, the engine-transmission - in the stern of the hull. Poor booking of the roof, bottom and sides of the tank is one of the main drawbacks of the classic layout, which, in terms of adopting anti-tank ammunition attacking armored vehicles from above and below, has practically exhausted the possibilities of radical improvement. 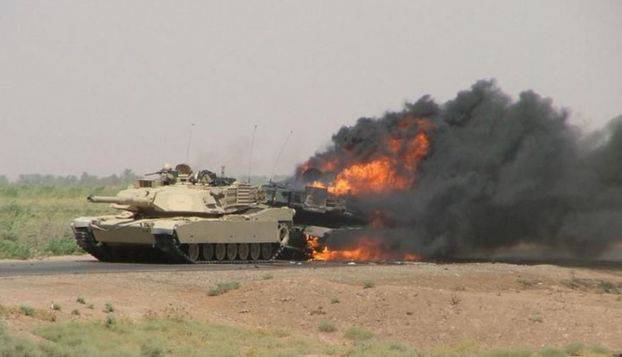 The Abrams tanks have the greatest armor protection from the front side. With the modernization of the parameters of the armor resistance of the tank M1А2 (table 1) increased in 1,4 times compared with the tank M1, which was achieved due to additional modules from depleted uranium. Note that the anti-cumulative durability of the frontal protection of the М1А1 tank, equal to 700 mm, means that if the cumulative ammunition has 700 mm armor penetration, then the protection with this ammunition does not break through. 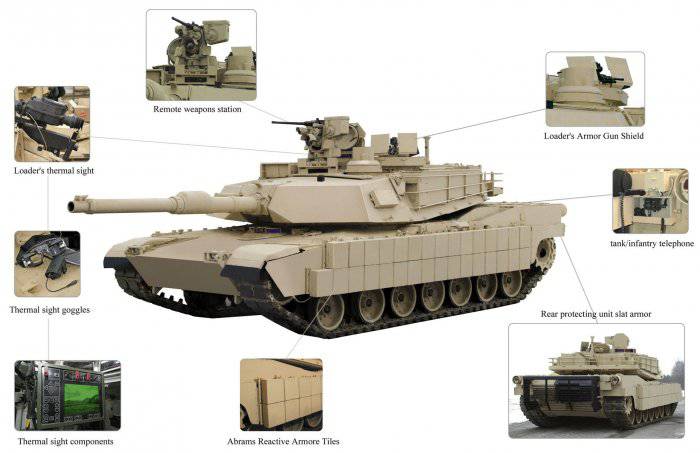 It is appropriate to ask the question: why did the Cornet scare the Americans? The answer is the distribution of the armor-piercing capability of the warheads of the Kornet missile when interacting with the frontal protection of the M1-X1 tank. After penetration of body armor, the unspent part of the cumulative jet (1000 mm - 700 mm) can penetrate another armor plate with a thickness of 300 mm, which provides a highly effective armor effect. In other words, if previously there were few cases of defeat of the Abrams by RPG-7 grenade launchers from the side and the stern from distances not exceeding 200 m, the presence of Baghdad’s Cornets would hit these tanks from any direction, using the range of this complex .

The side of the M1A1 tank (50 mm thick) and the screen placed in front of it, even with reactive armor (ERA), will not protect the crew and internal units from ATGM, RPG and BPS. At the same time, the vehicle has weak armor protection of the roof (thickness - 80-40 mm) and bottom (60-20 mm), which does not save from the impact, for example, of the self-aiming cassette element "Motiv-3M" (used in aviation ammunition and MLRS), as well as from the PTM-3 cluster anti-tank mine. 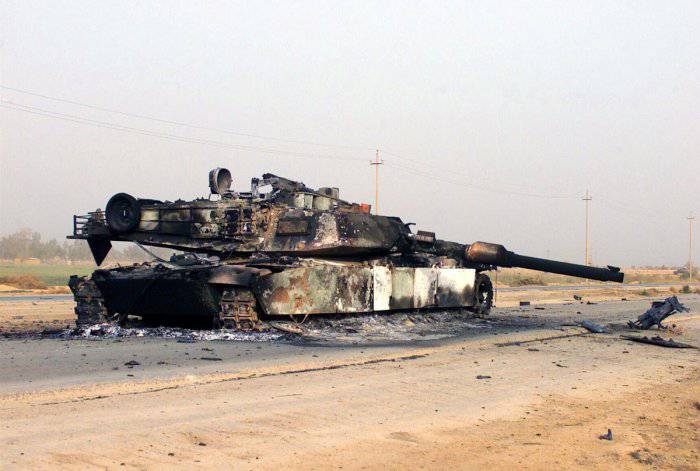 A comparative analysis of the armor protection of the M1А1 tank (М1А2) and the armor-piercing effect of anti-tank weapons (PTS) allows to note the following:
- the classic layout of the tank determined the high parameters of body armor only for the frontal parts of the turret and hull;
- weak booking of sides, roofs and bottoms does not ensure its survival from modern anti-tank weapons in combat conditions;
- In general, the tank's armor does not meet the conditions of future military conflicts with the use of advanced high-precision anti-tank weapons.

This ATGM is second generation. The main advantage of the rocket is the high armor-piercing effect of the warhead. Initially, the complex was developed as self-propelled, but later began to be offered as portable to reinforce infantry units. 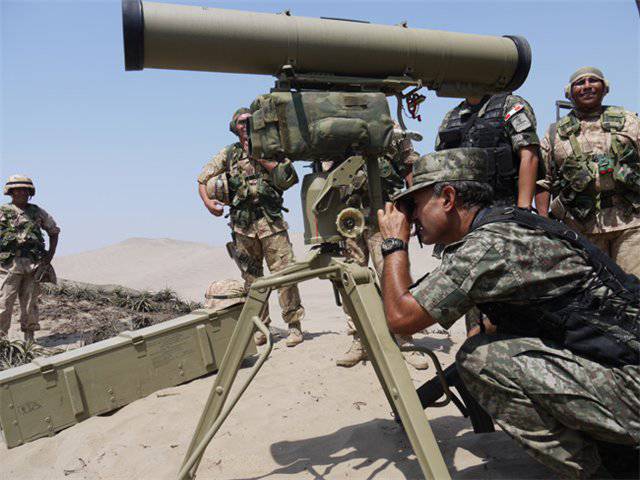 Using simulation computer simulation, the probabilities of hitting tanks M1А1 and М1А2 by the criterion of "loss of mobility or firepower" were determined. Under the loss of mobility means the failure of the engine, tracks and other nodes, as well as the driver. The loss of firepower is achieved by disabling the gun, its systems, as well as the gunner. The probability of hitting the M1А1 tank that is not equipped with a DZ, when attacking frontal zones, is 0,8, which is achieved due to the high armor penetration and sufficient armored combat performance of the missile. In Iraq, МХNUMXА1 tanks were without a DZ, since American commanders knew that Baghdad did not have a PTS with armor penetration significantly exceeding the resistance of the frontal protection of tanks. They did not even equip their DZ tanks, as this would have required significant financial costs, moreover, the dynamic loads on the undercarriage (total additional mass - 1 tons) of the already overloaded vehicle would increase.

THE MAIN TACTICAL AND TECHNICAL CHARACTERISTICS OF THE KORNET ATKM 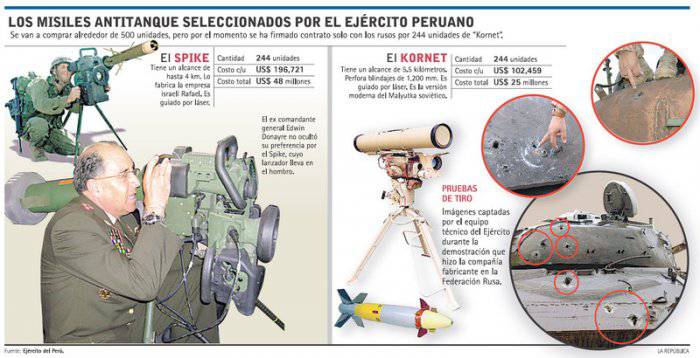 And what is the survival rate of the M1А1 tank when firing a Cornet-E rocket in the forehead? To do this, according to the existing rules, we will do the following operation: subtract from 1 the probability of hitting the MXNXXX1 tank, equal to 1, and get 0,8, which indicates a fairly high risk of being hit on the battlefield by this rocket.

Thus, the simulation results made it possible to confirm the effectiveness of the “Kornet” during the shelling of the М1А1 tank in the conditions of the past military conflict. Therefore, it is understandable alarm US Department of State, which uses any tricks in its often unjust game. If Baghdad even had a few hundred Kornets, it would be necessary to organize a tank cemetery for the Abrams.

One should not delude ourselves with the presented performance characteristics of the Kornet-E ATGM system. It should be noted that this complex was worked out according to the performance characteristics of 20-year-old, in which the parameters of DZ simulators and multi-layered booking of foreign tanks did not reflect the reality ("MIC" No. XXUMX, 8). As a result, Russian ATGMs with tandem warheads overcome an overseas remote sensing system with a probability of no more than 2003. The tandem DZ appeared abroad is an almost insurmountable barrier for Russian anti-tank guided missiles with tandem warheads. 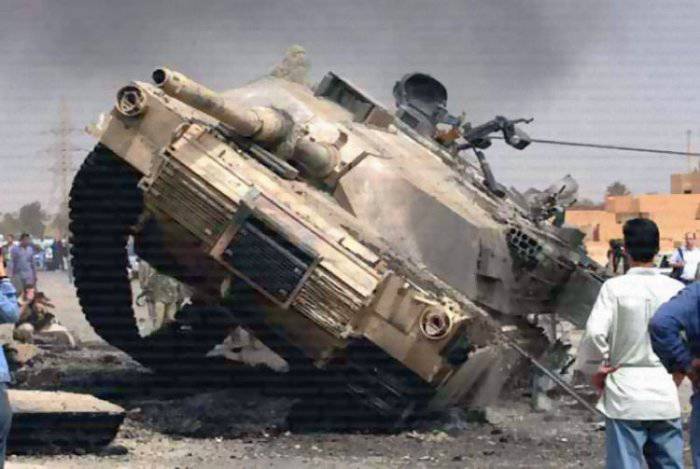 When adopting the ATGM for armament, state tests were carried out under conditions that did not correspond to combat.

The use of a laser beam in the guidance system requires the absence of bushes, hills, smoke screens on the rocket's flight path. This circumstance, for example, in the West European theater of operations will not allow firing the Kornet rocket to the maximum range, since the terrain relief provides visibility of targets for no more than 2 km.

A further increase in survivability of American tanks will be carried out by installing an active protection complex that includes detection tools (special sensors for detecting anti-tank ammunition), tracking, destruction, and setting passive (smoke grenades) and active (interference transmitters for laser and infrared ATGM systems) interference.

One of the main features of the modification of the Abrams - the М1А2 SEP tank - is the presence of an on-board information management system (BIUS), which is connected to the automated control system of the tactical unit of the Ground Forces. The CICS carries out the display of the tactical situation on the display screen of the tank commander, and also transmits data on the location of the enemy objects and his troops. Installing BIUS on the M1А2 tank dramatically increases its survival in combat conditions.