Nicaraguan government recognized Crimea and Sevastopol as part of Russia 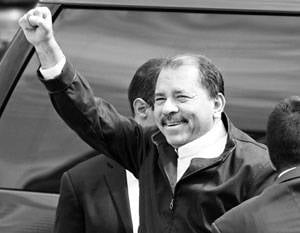 The Ambassador of Nicaragua in Russia, Luis Molina Quadra, stated that his country “unconditionally” recognizes the results of the referendum in the Crimea and, as a result, the entry of Crimea and Sevastopol into the Russian Federation as full-fledged subjects. Earlier, Russia's actions supported Venezuela, Belarus, Kazakhstan, Syria, but in some cases this support requires not just words, but also legalization.


After the leader of the Sandinista revolution, Daniel Ortega, returned to power, winning the presidential election 2006 of the year, official Managua began to re-orient itself to Moscow and consistently support the Russian authorities, including on the issue of changing borders in the post-Soviet space. So, in 2008, Nicaragua became the first country to recognize the independence of Abkhazia and South Ossetia after Russia. Then this was unexpectedly announced by Ortega himself as part of his speech to the military. “Russia had no other way than to give them military and political support in the face of constant threats to Georgia,” the politician said, accusing the NATO countries of “threatening peace on Earth” and “spending huge sums of money not only on the wars in Iraq and Afghanistan, but also on creating a military environment around Russia. ”

Incidentally, Afghanistan is also among the countries that recognized the results of the referendum in the Crimea. Moreover, President Hamid Karzai said this not just anywhere, but during a meeting with a delegation from the United States. “Crimea became part of the Russian Federation after the referendum, during which the people of this republic spoke in favor of this. Therefore, we treat this decision with respect, ”Karzai told the somewhat dumbfounded Americans. US spokesman John Kirby, for his part, noted that the opinion of the Afghan president, "obviously, will not do any good." There is nothing surprising about this: Karzai’s relations with Washington have deteriorated badly in recent years, and the United States would prefer to see in Kabul both a more loyal and more effective (in terms of fighting the Taliban) leader.

Venezuela, which in 2008 followed the lead of the allied Nicaragua, reacted earlier this time. The current President of the Republic, Nicolas Maduro, not only supported Russia, but also accused countries that do not recognize the results of the referendum in the Crimea, in the application of double standards. “It turns out that it is legal from the point of view of international law to divide Serbia ten years ago and to take Kosovo away from it through a referendum. It turns out that trying to take away the Falkland Islands, which are located here in South America, from Argentina with the help of a referendum, is absolutely dishonorable and illegal, from the point of view of Europe and the United States honestly. But if the residents of Crimea hold a referendum to secure a peaceful future for themselves, then this is not in accordance with the laws. These are double standards of international politics, ”the president said on the air of his radio program“ In Contact with Maduro ”.

Here it is necessary to stipulate an important point. If the recognition of a new country (whether Kosovo or Abkhazia) by any government has a clear legal procedure and specific political consequences (in particular, establishing diplomatic relations), then in the case of Crimea (that is, expanding the borders of the Russian Federation), the legal procedure is secondary. Acceptance of a country within clear boundaries can be stipulated in a bilateral agreement between states (for example, in a border treaty), in other cases the legal aspect is blurred and the political aspect becomes indispensable: a government at its own discretion or declares fundamental support actions, or, on the contrary, about their objections to this account.

That is why the approval of Russia by the third powers has such a strange form from the point of view of official diplomacy. Maduro announced the recognition of the new borders of the Russian Federation in a radio program, Karzai - in a conversation with guests from the United States, and the position of Nicaragua was generally known from the statement of the spokesman for the Communist Party Central Committee Ivan Melnikov following the meeting of the politician with the ambassador (Russian communists and Latin American left-wing governments traditionally maintain friendly relations).

Also in support of the actions of the Russian Federation expressed such countries as Syria, North Korea, Uganda and several others. It was a complimentary gesture in its pure form, it does not require legal registration. Many states kept silent about what was natural - the position of neutrality for countries distant from the scene of action is traditional. For example, China has territorial disputes with Japan and South Korea, while the governments of third countries do not usually touch on the question “What are the borders of China recognized by you?” In order not to spoil relations with any of the parties to the conflict. Like, sort it out yourself. Similarly, it is impossible to divide all countries of the world into those that consider the Kuril Islands a part of the Russian Federation, and those that consider them a part of Japan.

But there are exceptions, the most indicative of which relates to military alliances. In these cases, the recognition of the country in the declared boundaries is crucial and should be specified in specific documents. For example, Russia is in the CSTO, whose charter copies the NATO charter in some places: an attack on a country party to the Treaty is considered an attack on all countries of the Treaty. If the CSTO states recognize Crimea as part of Russia, then Kiev’s theoretical attempt to bring its troops to the peninsula should be legally evaluated as aggression against the CSTO.

A number of CSTO members have already declared their support for Russia's actions. Thus, the President of Armenia Serzh Sargsyan, in a telephone conversation with Vladimir Putin, stated that the referendum in the Crimea is “another example of the realization of the right of peoples to self-determination by free will”. In turn, Kazakhstan recognized the referendum in the Crimea as a free will of the inhabitants of the peninsula and "with understanding refers to the decision of Russia to accept the territory in its composition", as reported by the press service of the republic's foreign policy department. Finally, Alexander Lukashenko declared that “the de facto Crimea has become a part of Russia, and we will be with Russia.” At the same time, he added, “what will be de jure - it will be later,” since “it is possible to recognize, not to recognize, but nothing will change from this.”

Such support could be considered exhaustive, but not in the case of Belarus. If it is quite normal for Venezuela and Nicaragua to confess the results of the Crimean referendum in words, in the case of a border country, a partner in the CSTO and the Customs Union, and finally, for the member of the Union State project, recognition of Crimea as part of the Russian Federation should still be legalized. Thus, the questions “what will be de jure” and when it will be “later” are quite relevant, and Moscow will still have to return to them as part of its relations with Minsk, Astana and Yerevan.