Military equipment of the Armed Forces of Ukraine, remaining in the Crimea, and the main specialization of the defense industry enterprises of the Crimea 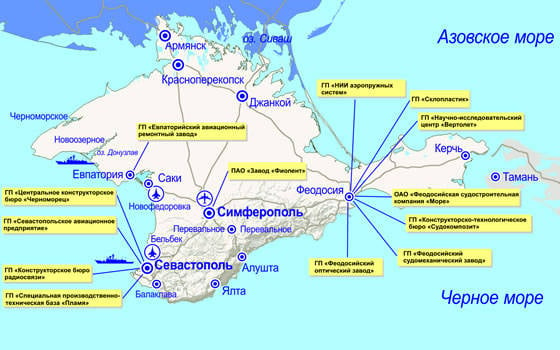 After the announcement of the referendum of the Republic of Crimea as an independent state, its further integration into Russia and the commencement of the withdrawal of Ukrainian servicemen, a significant number of Ukrainian armed forces remained in the peninsula.


According to the press secretary of the President of the Russian Federation, Dmitry Peskov, the Ukrainian military can freely leave the territory of the Crimea, “but with weapons or not, the Ministry of Defense will decide. ” The determining factor in this regard is likely to be stabilization of the situation on the territory of Ukraine, since it is hardly expedient to return weapons to the country that announced mobilization.

According to the Russian Defense Ministry, at the first stage, the Russian side began an inventory of abandoned military hardware in the Crimea and ensured adequate protection of the entire military infrastructure of the Crimean peninsula in order to exclude possible thefts and looting.

Ukrainian authorities claim that the total value of military property left in Crimea is estimated at 18 billion UAH. (about 1,7 billion dollars).

Quantitative assessment of military equipment of the Armed Forces of Ukraine, remaining in the Crimea

The most numerous component, subordinate to the command of the Ukrainian Navy (military unit A-0225, the city of Sevastopol) in the Crimea, were coastal defense units, which were generally supervised by the Coastal Defense Forces Center (Simferopol).

In service 25-th dep. of the missile division of coastal defense (military unit A-2291, the city of Hevastopol) there was an 2 PU of the Rubezh SCRC.

In addition, the armed forces of these formations, as well as bases, warehouses, parts of management and support, consist of various special equipment, communications and air defense systems, maintenance vehicles, a significant number of small arms and ammunition and other property.

The full version of the article for subscribers will be published in the World Arms Trade Magazine No. XXUMX.

Characteristics and specialization of defense enterprises in the Crimea

On the territory of Crimea there are 13 enterprises that are part of the Ukroboronprom group of companies:

Overhaul, re-equipment and modernization of the Ka-25, Ka-27, Mi-8, Mi-14, Mi-17 helicopters of all modifications, their units and equipment, as well as ground-based flight support, communications and navigation. All technological processes approved by developers - KB them. Kamov and KB them. ML Mil, who produce technical support for the overhaul of helicopters.

The company provided services for the repair and modernization of aircraft for the Ministry of Defense of Ukraine, including for 56-th separate helicopter unit of the Armed Forces of Ukraine, involved in the UN mission in Liberia, and foreign customers. The plant cooperates with the CIS countries, as well as with states and private companies in Europe, the Middle East, India, Southeast Asia and Africa. The successful geographical location on the Black Sea coast, the presence of a specially equipped sea terminal, developed infrastructure, proximity to the railway hub, sea port, airfields, motorways allow transportation for repair and shipment of aircraft after repair to the customer by any type of transport.

Currently, SE Sevastopol Aviation Enterprise is overhauling X-NUMX Mi-6 helicopters for the Croatian Air Force as part of the contract signed in July 8 by GK Ukrspetsexport and the Ministry of Defense of the Republic of Croatia. Two repaired helicopters have already been handed over to the customer, the third car is preparing to fly over. .

The full version of the article on the specialization of all 13 enterprises of the Crimean military-industrial complex for subscribers will be published in the World Arms Trade Magazine No. XXUMX.

Ctrl Enter
Noticed oshЫbku Highlight text and press. Ctrl + Enter
We are
The action “Military service under the contract is your choice!” In Rostov-on-Don: future contract servicemen, exhibitions and “Russian Knights”Sell ​​or return
Military Reviewin Yandex News
Military Reviewin Google News
90 comments
Information
Dear reader, to leave comments on the publication, you must sign in.