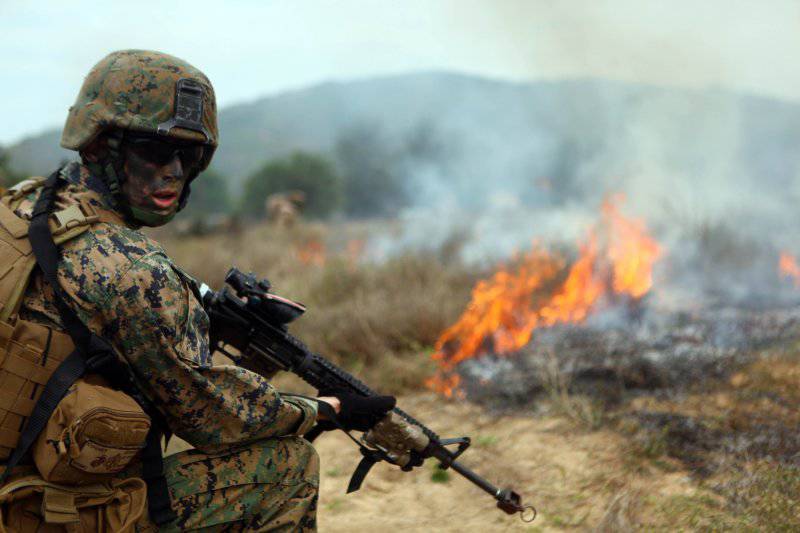 Which country represents the greatest threat to the world community? Pakistan who cannot feed its ever-growing population? Afghanistan, where every inhabitant, one way or another, is involved in the production of drugs? Maybe Saudi Arabia is a sponsor of Islamic terror? No, the world is most afraid of the United States - the global gendarme who, under the guise of fighting crime, shamelessly dictates his conditions to weaker states, fights with them and destroys them.

Experts of the American Institute of Public Opinion Gallup International came to disappointing conclusions for the United States: a recent poll showed that a quarter of the world's population fear aggression from the United States. It is significant that only 5% of respondents consider the main threat to the peace of the country of the “axis of evil” is Iran and the DPRK. Another 2% of respondents called Russia their enemy.

In a survey conducted by employees of Gallup International, 70 participated thousands of people from 65 from different countries. The Institute organizes such research events annually. Survey results are respected among sociologists, political analysts and academics.

The latest survey by Gallup International once again demonstrated the strong rejection of American culture among the majority of the inhabitants of the planet Earth. So, about a quarter of respondents reported that they consider the United States to be the main threat to world stability in general and their country in particular.

America hates hardest ... in Russia: it was called the aggressor 54% of Russians. In second place is mainland China, where 49% of the population treat the States as an enemy.

The US also hates Serbia and the Middle East. Unsurprisingly: the Serbs suffered from the American bombardment, as well as the people of Iraq. In recent years, the States have been supporting Israeli raids into Palestine, Lebanon and Syria, funding various groups in the weakened Arab Spring countries, adding fuel to the fire of the Syrian war, including supplying weapons Syrian rebels. All this only angers the Muslims of the Middle East.

America is despised even by its best allies. Thus, in Pakistan, 44% of residents consider the United States to be the main external threat to the country's national security. At the same time, the Pakistani authorities are trying to maintain partnerships with Washington, allowing American troops to use Pakistan’s infrastructure to secure the occupying contingent of NATO countries in Afghanistan.

The US is trying in every way to bribe the Pakistani government. Pakistan recently received material assistance in the amount of 1,6 billion dollars. The formal reason for the allocation of funds was the “stabilization of the military and political situation” in Pakistan, but it is not a secret to anyone that the money “settled” in the accounts of important officials. So Washington buys the Pakistani ruling elite, which chose a foreign policy course against the will of the people.

The reasons for the hatred of Pakistanis are simple: since the United States appeared in the region, the already difficult political confrontation within the country has escalated to the limit. Washington is manipulating some Pakistani politicians like dolls.

For the same reason, the United States has been subject to scorn in Turkey and Greece. In these countries, 45% of citizens do not want friendship with the "world gendarme."

Surprisingly, the USA managed to defame themselves even in Latvia. The authorities of this republic are trying in every way to get close to the United States, but 39% of Latvians strongly oppose such foreign policy. The situation is similar in Ukraine: about a third of Ukrainians treat the United States as a hostile country. And recent events have shown that such an opinion is fully justified.

Paradoxically, even the Americans themselves consider the United States to be a threat to the world: 13% of US citizens said their country is too aggressive. The best of all are States in Italy and France: only 3% of their citizens hate America.

Is the United States alone?

The United States in the past two decades have made many mistakes in foreign policy. The collapse of the USSR did not go to power for Washington: reveling in its impunity, the States carried out a series of attacks on states in all corners of the globe. Moreover, if before the overseas wars of the White House were justified by the struggle against the "red threat", now the United States can hardly find a reason for another act of aggression.

The clearest example of this is a test tube with an unknown white powder that Colin Powell showed at the UN 5 February 2003 meeting on the eve of the Iraq war. It is obvious that the United States, due to its overly aggressive positions, is losing legitimacy in the eyes of the world community.

The loss of the “red threat” is a tragedy for the Pentagon. American political analysts rethought the events of 1991 in Moscow, and regret that the Soviet Union no longer exists. Say, now the United States can no longer attack anyone just because he was suspected of collaborating with Moscow. Moreover, Washington should be responsible not only for the Western, but also for the Eastern Hemisphere, which was previously largely under the control of the USSR.

In fact, the United States after 1991, turned into a world gendarme. America was required to take responsibility for its allies, who, in the absence of an enemy, began to clash with each other, and act as judge.

But Washington went the wrong way. Instead of solving conflicts, the White House began to produce them. Having imagined herself to be the ruler of the world, America ascended to the skies ... But, as you know, the higher you are, the harder it is to fall.

The hopes of US allies did not materialize. Having rejected collective security, Washington for the past twenty years has been guided solely by its own interests. In many countries, NATO realized that relying on the States is no longer worth it. The Alliance is now weaker than ever: during the Crimean crisis, not all its members took the side of Barack Obama. And although in the end, the states adopted a joint statement, it took longer than usual to do this. So, someone had to "break."

At the same time, the opponents of the United States are becoming more numerous and motivated. After the fall of the Berlin Wall, Washington managed to incite even those states that remained neutral during the Cold War. The “old” enemies from the socialist bloc also remained, for example, Cuba and the DPRK.

Thus, the US has too many enemies, while almost all allies are lost. Trying to preserve their world power, the United States is at a disadvantage because it is making too much effort for it.

Looks like Pax Americana has come to an end. The Pentagon decides to build up forces in only a few regions of the world and leaves regimes in some “friendly” states without armed support. The American politicians state with bitterness: the wars in Iraq and Afghanistan are lost, the “Arab Spring” failed, although it took many lives.

Washington understands that nothing has been achieved in two decades of unlimited domination. Many of the adventures have failed and marked the beginning of long-running conflicts that the US is unable to resolve. Therefore, in the near future, the White House will in every way try to shift responsibility onto the shoulders of regional states, including Russia.

Moscow faces the problem of Afghanistan, from where the withdrawal of American troops. There will be a lot of difficulties in Ukraine as well, destabilized by a putsch inspired from abroad. Most likely, the Kiev coup is one of the last surprises of the United States, because Washington has a very serious competitor in the Far East - China.

America, with a cowardly tail between its legs, leaves Central Asia and Eastern Europe in order to intensify in the Pacific Ocean. The States have no opportunity to keep the occupation troops in every corner of the globe, and the White House, contrary to their desires, is forced to abandon the idea of ​​world domination with disgrace. The damned country is slowly disappearing from the European and Middle Eastern policy, giving way to regional forces.

Ctrl Enter
Noticed oshЫbku Highlight text and press. Ctrl + Enter
We are
DPRK defense potential in Google Earth imagesGeopolitical mosaic: the healthy forces of Germany are protesting against the dominance of LGBT in school education, and the Gallup poll showed that the USA is the threat №1 to “world peace”
Military Reviewin Yandex News
Military Reviewin Google News
58 comments
Information
Dear reader, to leave comments on the publication, you must sign in.