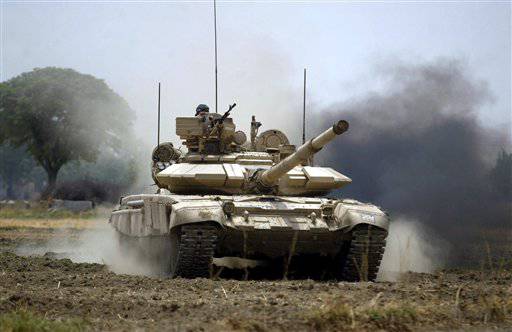 Russia's positions on the world market for armored vehicles look very contradictory. This confidence was expressed by the Center for Analysis of Strategies and Technologies, and the Deputy Director of the Center Konstantin Makienko reported in an interview for RIA "News". The country, he said, began to slowly lose ground due to the fact that it is not able to produce modern competitive products.

The contradiction is that in 2000-2009, the Russian Federation was actually the largest supplier of the world market for armored vehicles. At the same time, the growth in sales of military tanks T-90S was provided mainly by India and Algeria. But outside of them there are no breakthroughs of the Russian car. In the world market, a Chinese-made VT1A tank has recently begun to gain popularity.

Konstantin Makienko believes that the stagnation of the technical level of T-90 battle tanks with an increase in its price was an objective reason for the defeat in the tender of Morocco for the supply of battle tanks: the Chinese VT1A bypassed our car. Chinese tanks offered for export are cheaper. Now China has introduced the Type 96 tanks to the market, and in the future the Type 99 is expected. This country has good chances to satisfy customers in various price and technical segments.

The loss of the T-90C in the Malaysian tank tender is another alarming signal, according to Konstantin Makienko. Here the Russian tank gave way to the Polish PT-91M. By the way, this machine is based on the Soviet T-72. The obsolescence of technology, the narrowness of proposals, as well as the lack of flexibility in responding to market requests - all these are the reasons for the slow weakening of Russia's position on the world market for armored vehicles. To overcome this trend, Russia must make a qualitative breakthrough.

A little to correct the situation can be brought to conformity with international standards of existing tanks, the same model T-90AM, for example. This machine was created by the Ural Transport Engineering Design Bureau. The tank is equipped with surveillance devices, protection, new automatic loader and gun.
Certain hopes were associated with the "195 Object" (T-95) - a fundamentally new design tank. He had new surveillance systems, an active protection system, an isolated crew compartment, an information management system and new engines. However, the Ministry of Defense of Russia stopped financing the project to create the “195 Object” last year, considering the cost of the vehicle and its technical complexity to be too high.

In the next few years, the high positions of the Russian Federation in the world market for armored vehicles will remain. However, the decline in sales of Russian tanks will provoke new developments in military equipment of competitors. Without a qualitative leap, according to Makienko, the preservation of Russia's leading position is impossible.
During 2006-2009, Russia sold the 482 tank to a foreign market. Total sales - 1,57 billion dollars. These calculations were conducted in September 2010. The volume of deliveries of Russia ranked first. For comparison: Germany proposed the 292 tank, and the US - 209 machines. World Trade Analysis Center weapons believes that the volume of supply of our tanks to the world market in 2010-2013 will be 859 units. The assessment is based on already concluded treaties and the stated intentions of some states.