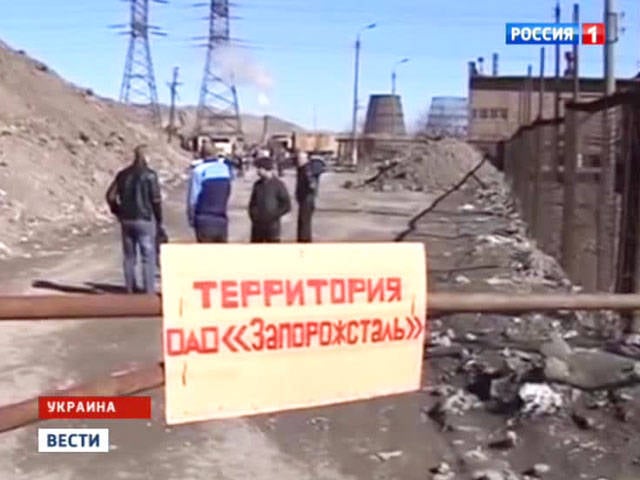 The revolutionary necessity explains the capture by militants of the key objects of Zaporizhstal - this is one of the largest metallurgical plants in Europe. Those who are approaching the roadblock, the invaders threaten to shoot at the legs. The Right Sector believes that it would be good to direct the company's revenue to the financing of the national guard, that is, it turns out, to its own financing.

They are armed with machine guns, machine guns, and promise to open fire if someone dares to approach them. Around 80, people in masks, camouflage, with red armbands on their sleeves, occupied the factory dumps of the largest Ukrainian enterprise, Zaporizhstal. At the time of the seizure, these people introduced themselves as activists of the Right Sector, but later, in their video message, pravoseki called their action not as a seizure, but as a guard of a strategic enterprise. And their goal declared overlap of shadow financial flows.

The authorities in Kiev are already looking at the regions covered by anarchy as they do not control the territory. The Ukrainian police are not taking action to expel militants from the territory of the metallurgical giant. And the head of the Ministry of Internal Affairs only gives deadly precise formulations. "A similar conflict is taking place in the Zaporozhye region at one of the iron ore plants. This situation must be ended. Otherwise, we turn to Somalia when gangs rule the streets and decide what and how is happening," says the Minister of Internal Affairs of Ukraine Arsen Avakov.

Zaporizhstal is a strategic asset of Ukraine inherited from the USSR. The first smelting of blast furnaces was given in November 1933 of the year. This date is considered the birthday of the plant. During the German occupation of Zaporozhye, the plant was evacuated, and after the war it produces metal for the Soviet automobile industry. From Zaporizhzhya rolled in Samara and Gorky collected "Lada" and "Volga". The industrial jewel of the Ukrainian USSR even falls on the movie screens. This is where the action of the film "Spring on Zarechnaya street" takes place.

With the collapse of the Union, the plant is a joint-stock company. Long история redistribution, both legal and criminal methods, to which the businessman Vasily Khmelnitsky from the close circle of Yulia Tymoshenko had a hand. Part of the assets was sold abroad. In 2010, for the 1 a billion 700 million dollars, unknown Russian investors buy Zaporizhstal. One year later, the structures of billionaire Rinat Akhmetov close to Viktor Yanukovych receive a controlling stake. Apparently, it is him, as the main beneficiary of Zaporizhstal, that the militants of the Right Sector have in mind when they talk about blocking shadow financial flows. However, it is possible that behind these loud words there is a banal repartition of property, which in today's Ukraine follows these methods.

This is once again confirmed by the night training footage, which the Right Sector arranged in Kiev near the organization’s headquarters. They practiced either defending their lair, or another action of forceful capture. The police do not touch the thugs, either at night or by day, when they are shouting "Muscovites on knives" demonstratively marching along the central streets of Kiev.