March 28 2014
7
In the late twenties, several countries began developing floating tanks. Such equipment could overcome water barriers without outside help and therefore was able to significantly increase the combat effectiveness of tank units. Until a certain time, France did not pay attention to floating tanks, not seeing the point in such a technique. However, reports of the creation of such armored vehicles in other countries have changed the opinion of the command of the French armed forces. The military department has initiated a new project. The contractor was Compagnie Generale de Construction de Locomotives (Batignolles-Chatillon), which was to develop and build a promising combat vehicle. 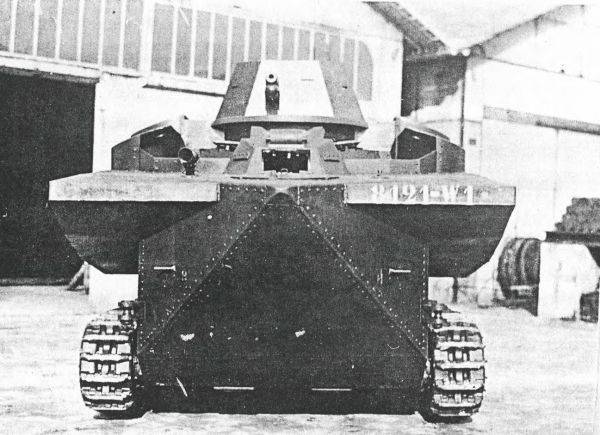 The project of a promising amphibious tank received the designation DP-2. When creating a new car, the French designers applied a number of original ideas that, in their opinion, should have affected its characteristics. Perhaps the most original feature of the DP-2 project is the design of the armored hull. Since the tank had to overcome water obstacles by swimming, the engineers at Batignolles-Chatillon decided to build the hull using some ideas borrowed from the shipbuilding industry.

The armored hull, assembled on rivets from sheets up to 15 mm thick, had a box-like shape and a characteristic pointed front part. It was assumed that such a “ship's nose” would provide the car with good performance when traveling on water. The buoyancy of the tank was supposed to be ensured by means of a high hull and two floats of characteristic shape, mounted on the hull sides, above the tracks. It should be noted that the draft of the DP-2 tank was quite large, as evidenced by the marks on the hull of an experimental machine, denoting the waterline.

When creating the undercarriage of a promising amphibious tank, designers from Batignolles-Chatillon took advantage of some of the previous projects. As a result, the DP-2 tank received a tracked propulsion unit, the appearance of which added originality to the entire “exterior” of the car. All units of the chassis were located at the bottom of the hull sides. On each side of the tank there were eight interlocking pairs of track rollers, three supporting rollers, leading and steering wheels (leading from behind). Carts of basic skating rinks equipped with a spring spring. Chassis units were covered with armored shield. 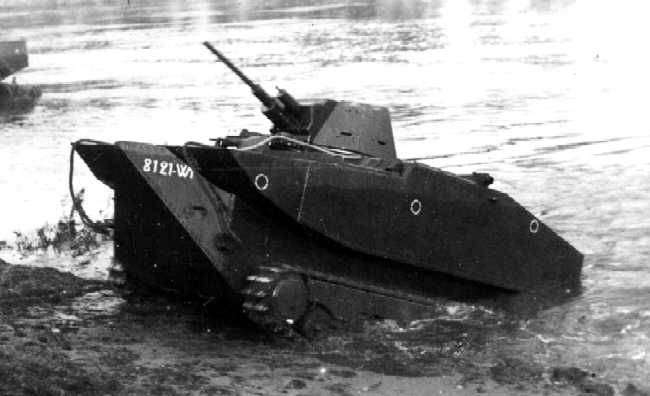 Despite the original hull design, the internal units of the DP-2 tank were proposed to be placed according to the classical scheme. In front of the hull placed the office of management with the workplace of the driver, in the middle - fighting compartment, and the engine and transmission were asked to install in the stern. Prospective amphibious tank DP-2 received 12-cylinder engine with horsepower 225. and manual transmission. As far as is known, the tank had to navigate through water by rewinding the tracks. Additional propulsion was not provided.

The crew of the Batignolles-Chatillon DP-2 amphibious tank was to consist of only two people — the driver and the commander who also performed the duties of the loader and the gunner. The driver had a small turret with a viewing hatch, covered by an armored guard. The commander was located in a faceted armored turret on the roof of the hull. According to the first versions of the project, the tank was supposed to carry one SA18 cannon of 37 mm caliber. Subsequently, the turret and tank armament underwent some changes. So, on the side sheets of the tower were added viewing slits, significantly improving visibility. The 37-mm cannon was replaced with an 25 antichar SA-L mle 1934 X-gun caliber 25 mm, paired with a 7,5-mm machine gun.

The first prototype of the floating tank DP-2, built in 1935, had a slightly simplified design. French tank builders thought that an experienced armored vehicle did not need a turret with weapons to test new ideas. A wooden model with a weight imitator was installed in its place. weapons. In this form, the tank Batignolles-Chatillon DP-2 came to the test at the end of 1935 year. 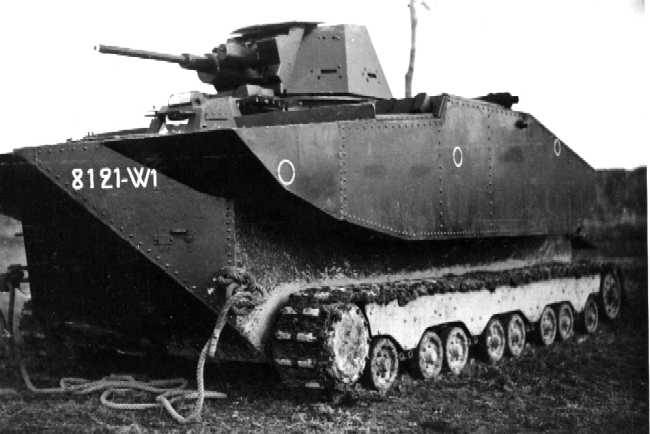 An experienced armored car weighing about 11,5 tons while moving around the landfill showed relatively good performance. The maximum speed on the highway reached 35-40 km / h. On the water, the prototype of the DP-2 tank developed a speed of up to 6-6,5 km / h. In general, the characteristics of the new amphibious tank looked interesting, but the car did not meet the requirements of the customer and required further refinements.

In the spring of 1936, the company staff completed the revision of an experienced armored vehicle. Instead of a wooden structure, she received a full-fledged tower with weapons. It is noteworthy that the turret mounted on the prototype was armed in accordance with the updated design and carried an 25-mm cannon and an 7,5-mm machine gun. In addition, some changes were made to the hull design. For example, characteristic cylindrical air intakes, designed to protect ventilation and the engine from water ingress, were removed from the roof.

After installing the new tower, the prototype of the floating tank DP-2 was heavier to 12 tons. Nevertheless, the adjustments made to the project led to a slight increase in the characteristics of the armored vehicle. In the summer of 1936, the tank was able to accelerate on the highway to 40,5 km / h. Speed ​​on the water remained at the same level.

During the two stages of testing, a serious lack of tank design associated with manufacturing techniques regularly made itself felt. The assembly of the hull on the rivets did not allow for the required tightness of the hull, as a result of which after each test "swim" the tank had to be literally dried. Until a certain time, this feature of the design strongly interfered with the tests, and eventually led to their suspension. During the next test, water got into the engine compartment and flooded the engine. An experienced DP-2 tank had to be hauled to shore using a tractor.

It was possible to get rid of the leaks with the help of another hull assembly technology, but the Batignolles-Chatillon DP-2 tank had some other drawbacks, the correction of which would require a serious rework. First of all, these were specific hull lines and chassis design. Because of them, the tank could descend into the water and climb back only on sections of the shore with a hard and gentle bottom. 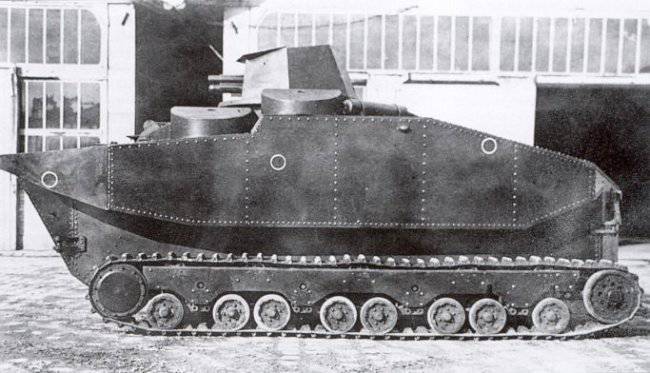 After the incident with the engine poured in, the prototype of the amphibious tank was again sent back for revision. The authors of the project again made some adjustments to the design of the machine, designed to improve its performance. In this case, the main features of the technical appearance of the tank remained the same, which could affect the future fate of the project. Apparently, all the improvements were useless and did not allow the characteristics of the tank to reach the required level. In April, the French military department 1937, having familiarized itself with the next version of the Batignolles-Chatillon DP-2 project, decided to stop all work.

Later, Compagnie Generale de Construction de Locomotives (Batignolles-Chatillon) once again tried to create a promising amphibious tank for the needs of the French army. Work on this project continued until the end of the decade and stopped after the start of the war with Germany. The only prototype of the DP-2 was stored at the factory for some time, but was later disposed of.