Dismantling the liberal media class and the challenges of new journalism 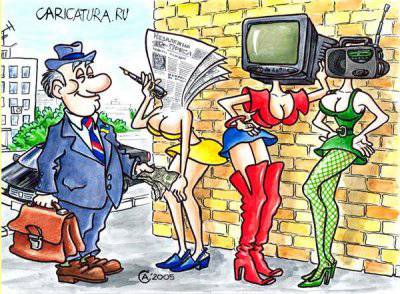 Somehow, absolutely strikingly against the backdrop of high-profile geopolitical events, the stripping of the Russian media space continues. Reformatting RIA "News", The change of leadership" Tape.ru ", the agony of" Rain ", a yellow card for the" Echo of Moscow "- this is a reality that yesterday and was difficult to imagine. Before our eyes, a whole media class is leaving, which so carelessly reveled in its sovereignty and intended to rule forever. I had a heart-to-heart talk with one of his prominent representatives, which boiled down to answering the question: “Why are you so?”. I suppose that part of it should be brought to the public, since the surprising has opened: they really do not understand what is happening.


The capital media class that dominated until recently and set the tone for political discourse is experiencing, of course, the deepest tragedy previously unseen. This tragedy is all the more terrible because it consists of two parts - the worldview and the personality. The first is associated with the collapse of the ideals that this class tried to impose on society, and the second - with the inability to continue to pay mortgage loans due to loss of workplace. This is aggravated by the sincere lack of understanding of why and why they are being punished. But if we use the terms of the victims and talk about "punishment", then it is obvious that they punished themselves and the current outcome was inevitable. And that's why.

More than twenty years of professional monopoly and resting on media laurels were not in vain and naturally led to the professional degeneration of the class. In this sense, the so-called. “The new democratic Russian journalism” stepped on the same rake as its Kondovo-Suslov predecessor of the late USSR, it relaxed and turned away from reality. The last heroes of these monopolists were the journalists Parfyonov and Lobkov, whom 10 has been copied for years by all and sundry, and nothing new has been born after them, except for clones of American television shows. Is this not a crisis of the genre?

But the lack of forward movement always turns backwards. Similarly, our journalism, having occupied all conceivable commanding heights, has generally ceased to perform any social functions, having descended to empty indulgence with low instincts and momentary moods of the masses. Why work, invent something, if such a situation suits both the authorities, the society, and the advertiser? Such was the prevailing logic of two decades.

Reason Two: "We are here in power"

However, at the beginning of this decade, the media class was either bored to drive the usual dill, or was tortured by nostalgia for the nineties, but somehow he wanted to play big politics. And since at that time I had completely lost touch with reality, then, having nothing new, I simply transferred my old methods to Twitter and Facebook, which, in my laziness, did not bother to understand the changes that had taken place in society since . On what and got burned.

This is due not only to laziness, but also to the inherent vice of the injured media workers - frantic snobbery. The profession turned into a closed get-together with an expensive entrance ticket and ideological qualification, which, by its will, separated itself from society as an unpleasant and annoying, but ineradicable factor. This tusovka placed itself both above society, and above power, and even above oligarchy. And she was so blind that she began to shit on the heads of both of them, thereby strengthening her faith in God's chosen people - you see, we are spoiling, and they suffer! We are the power here!

What really happened at that time

The main thing that the party missed was a change in public sentiment. The society, humiliated and trampled, lost faith in their own strength, for a long time suffered, as if voluntarily punishing themselves for past mistakes. But at the same time and every day she began to see clearly. So the supposedly obedient slave, seeing the constant drunkenness and debauchery of the once mighty master, begins to secretly file off the shackles and prepare a plan for liberation. The party continued to walk, believing the slave to be as weak and weak-willed as before.

“Do you know how many people consider you pests?” - I ask my interlocutor.

- Believe me, they want to hang you on the lanterns.

“Because you trampled in his shit for too long.” Can not be so.

- Whom did I personally trample?

- Let's just say, you arrive for the company. But you contacted her. All these Gozmans, Shenderovichi, women of Lera, all these freaks - they are to blame for your troubles. The people do not distinguish you - you all look the same.

- And who represents you? Rotenberg? Kovalchuk? Abramovich? Sechin? Do you think they are not trampling the country into shit? !!! They are the main bullshitters with their western citizenship!

- It turns out that their Western citizenship is in fact less annoying to the people than the attacks of “ehomoskovskih” authors.

- No, the people will survive with us. And Shenderovich. And rotenberg.

In this stories no place for gloating. There is only a statement of objective processes. The main trouble of the party is that she did not calculate them, for which she pays. This should be a lesson.

The dismantling of an old, outdated journalism by itself means little if a new, more worthy one does not take its place. The worst possible is the change of rhetoric from liberal to patriotic, without updating the genre and revising professional quality criteria. At first, enthusiastic sovereign rhetoric, of course, will delight the public’s ear, but soon they will also hate it no less than liberal, remember how the aforementioned soviet “party journalism” helplessly merged the country at the end of 80. We risk getting a class of new opportunists, including those who fled from the liberal camp, persecuted by mortgage loans and the habit of a full life. As a result, society will again be deceived and demoralized. You can not let this happen.

Ctrl Enter
Noticed oshЫbku Highlight text and press. Ctrl + Enter
We are
About Stalin and KhrushchevWhat you didn't want to know about England
Military Reviewin Yandex News
Military Reviewin Google News
91 comment
Information
Dear reader, to leave comments on the publication, you must sign in.