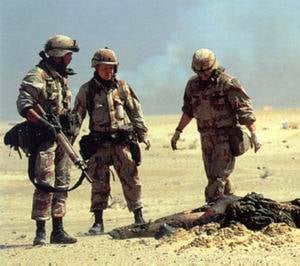 A few days ago, Izvestia published a short note that one of the German private security companies (or, more precisely, to call such organizations private military companies) offered to send its employees to "hot spots", and this caused a big scandal ("Security guards rush to war" , "Izvestia", June 4 2010). The topic, in my opinion, requires development, since this is not about curiosity, but about a trend, the consequences of which are difficult to predict.

The first of the existing private military companies (PMCs) emerged during the Cold War. At the same time, the leadership of the United States, Britain, Israel, and South Africa directly contributed to their creation. PMCs could be assigned to the most “dirty” work (such as overthrowing legitimate governments or organizing terrorist groups), and in case of failure to disown them under the pretext that commercial structures operated.

After the end of the Cold War, the demand for PMC services became even higher, while an explosive increase in supply occurred due to the collapse of the armed forces in the West and in the East: many laid-off servicemen entered the labor market.

By the mid-2000s, the number of PMCs (we are talking about companies that provide military services, and not those involved in logistics) exceeded a hundred, the number of their employees reached 2 million people, the total market capitalization exceeded $ 20 billion, and the volume of services provided amounted to various data, from 60 to 180 billion dollars a year. The most famous and large PMCs are Hulliburton, Blackwater, DynCorp, Logicon, Brown & Root, MPRI, Control Risks, Bechtel, ArmorGroup, Erinys, Sandline International, International Defense and Security. Their services are becoming more diversified. They are engaged in demining, guarding important objects, organizing the delivery of various kinds of goods, developing plans for military construction and the combat use of the armed forces (for example, MPRI trained the Croatian armed forces, which in the fall of 1995 defeated and eliminated Serbian Krajina). In this regard, official international organizations, including the UN, sometimes become employers for PMCs.

Services of PMCs are all the more demanded in a situation when the majority of the Western armies are completely unprepared to conduct operations, implying serious losses. But the "private traders" are not considered losses. Their losses are not included in the official statistics of countries, which is very convenient from a propaganda point of view. And in the composition of the private security committees are citizens and those countries that are not officially involved in the war and even condemn it. For example, a significant number of mercenaries from Germany are fighting in Iraq in the ranks of American and British PMCs, although the German leadership was and remains one of the main opponents of this war. And recently it became known that the German private security company Asgaard German Security Group (about which Izvestiya wrote) sent a group of 100 fighters to Somalia who would fight on the side of the self-proclaimed "President of the Republic of Somalia" Galadid Darman, who did not receive recognition from the international community .

Many PMCs seek to recruit foreigners. At the same time, preference is often given to citizens of Eastern Europe and the former USSR, as well as developing countries, since they are distinguished by a good level of training and are willing to fight for less money than citizens of Western countries whose salaries in conflict zones can reach 20 thousand dollars per month . The content of a mercenary, by the way, costs about 10 times as much as a regular army soldier.

The fact that the state leadership is not formally responsible for the losses of PMCs, nor for the crimes committed by their employees, leads to their ever increasing involvement in wars with the regular armies or instead of them. The high cost of fading into the background. So, today more than 400 PMCs are involved in Iraq, the total number of their personnel exceeds 200 thousand people, i.e. more than the troops of the United States and its allies. The losses of these structures are at least not less than those of regular armies, but they are not taken into account in official statistics. At the same time, PMCs are constantly becoming participants in all sorts of scandals, since their employees behave in relation to the civilian population much more harshly than the "official" military personnel (in Iraq, Blackwater is especially famous for this).

In addition to the "actual war" PMCs assume more and more support functions. These are all types of logistics (including, for example, cooking for military personnel and cleaning the barracks), engineering, aerodrome services, transportation services. Recently, intelligence has become a new field of activity for PMCs (even 10 years ago it was impossible to imagine this). Thus, the developers of the Predator and Global Hawk drones, actively used by Americans in Iraq and Afghanistan, are fully engaged in their maintenance and management, including directly in combat situations. A regular army officer only sets a common task. Other PMCs are engaged in collecting and analyzing information about terrorist groups (including through the Internet), provide for the armed forces the services of translators from Eastern languages.

And gradually the quantity turned into quality. Recently, the Pentagon discovered that the US armed forces, in principle, can no longer function without private companies, without them even a limited military operation cannot be conducted. For example, it turned out that the supply of fuel for the Allied group in Iraq was privatized at 100%. Once it was assumed that the involvement of private owners will lead to savings in the military budget. Now it is obvious that the situation is reversed: their services are much more expensive than if the “state” military did the same work on their own. But, apparently, it's too late. The process has become irreversible.

On the way to the creation of PMCs, moreover acting in the interests of the state, China can go. At least, this was mentioned in the sensational book "China is not happy", published a year ago and considered as a description of the plan of the global military expansion of the PRC. Private military companies, named in the book "companies for the protection of the safety of the seas," should become an important part of this expansion: "We can say even more clearly: namely, we are talking about the use of demobilized, military personnel who have retired from the army. We There are such advantages as people and organizations, and our "companies for the protection of the safety of the seas" can restore peace in so many regions of the world where lawlessness and disorder prevail. As you know, China is very actively engaged in economic expansion in Asia and Africa, it will be logical if Chinese military, formally considered "private owners," will come for engineers and workers.

The consequences of the emerging trend of "privatization of war" are still difficult to assess. There are suspicions that they may be very unexpected. And extremely unpleasant.