March 28 2014
83
After the announcement of the newly-minted "authorities" in Kiev, the general headquarters of Ukraine announced partial mobilization that the military commissariats could not even carry out the initial mobilization plan. The reason for the failure to comply with the plan is that 8 from 10, let's say, potentially recruited does not meet the requirements. And it’s not that the requirements of the General Staff were impracticable - not at all. The thing is different. People who have serious health problems, not to mention the level of military training, are arriving at the military registration and enlistment offices.


RIA News quotes the officer of the General Staff of Ukraine:

In military registration and enlistment offices there is an extremely low percentage of men who once served and were enlisted in the reserve. Mostly people come to the recruiting station, often on their own initiative, people who did not serve either for health, or for other delays, or generally evaded conscription. Only in Kryvyi Rih, out of the 200 reservists who arrived from the beginning of the partial mobilization, only 25 people were selected.

The same representative of the Ukrainian General Staff adds about material and technical support in recruiting all those reservists who are joining the ranks of the “militia” today:

Ammunition and fuel limits for the preparation of deployable units are taken from NZ warehouses. Training of draftees takes place in theory, since most of the landfills, shooting ranges and training equipment were not ready to conduct training in combat training. Needless to say, we hardly feed them with grief in half. 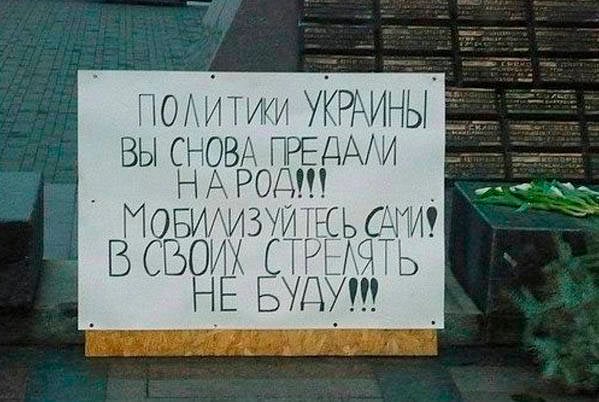 Ukrainian military commissariats announce mobilization for persons who managed to serve in the army at one time, having received this or that military specialty. The greatest demand, as indicated in the "advertisement" of mobilization, is the shooters, machine gunners, drivers, snipers. Hypothetically ready to take on the service and those men who did not serve in the Armed Forces (other security agencies) of Ukraine, but this is hypothetical. In fact, as the representative of the General Staff mentioned, the situation with such “volunteers” is completely bleak.

From the military commissariats, along with the summons, messages are sent that if a man fails to respond to the summons, he will face a criminal sentence of imprisonment for up to five years. But such threats today are far from being at all - long lines at the district military registration and enlistment offices are not recorded.

The words about more than modest material and technical support of both the mobilization process itself and those directly mobilized, expressed by the representative of the General Staff, are confirmed at least by the numbers of financial support for the military personnel of the Ukrainian army. To date, the salary of an ordinary contract soldier of the Armed Forces of Ukraine is 1850 hryvnia - less than 6000 rubles. The ordinary composition of the so-called National Guard, formed from volunteers, is charged exactly the same. The plans of the leadership of law enforcement agencies seem to have points on raising wages in the National Guard (which still needs to be formed) and in the Armed Forces at about 2 times, but plans are one thing, but objective reality is another. And the reality is that as of March 1, wage arrears in Ukraine amounted to no less than 1 billion hryvnia (about 3,2-3,3 billion rubles). Against the background of statements about the need to increase the material support of servicemen and “national guardsmen”, the self-proclaimed government of Ukraine announced that the minimum wage and the level of the subsistence minimum will not increase in order to save money ...

Of course, for a volunteer, the level of material well-being, such as, should not be decisive; decisive should be the desire to stand up for their homeland, but here there are certain rough edges. Not every potential recruit in Ukraine today clearly understands what it is (for whom) he is being called to stand for. For the new oligarchs and henchmen of the West in power, for striving to Europe on bird rights, for the integrity of Ukraine, which (integrity) was shaken after the new “power” began to behave in politics like an elephant in a china shop.

Calling to stand for “Batkivschyna” (in the sense of, for the Motherland, and not for the party) new officials who found themselves at the helm on the wave of radical speeches and pogroms - the very new “power” that had declared it needed to get rid of from the oligarchs in power, and then - silently put the representatives of the oligarch in the gubernatorial chairs: Kolomoisky, Taruta and other "revolutionaries".

In the Dnipropetrovsk region, which, with the filing of Kiev, headed by the aforementioned oligarch Kolomoisky, under the regional administration, the formation of its own paramilitary units, united by the common name “National Defense Regiment”, began. This was announced by the Ukrainian TV channel TSN on air from 20 March 2014 of the year. It is reported that in the regiment to protect against the "likely invasion of Russia" as a volunteer can be enrolled and those citizens of Ukraine who could not get mobilized through the military commissariats.

In fact, this means the following: when the Dnipropetrovsk regional administration (under the patronage of Mr. Kolomoisky), units are formed of persons who were rejected by the military commissariats both for health reasons and for the level of military training.

He became famous for his tirades about Crimeans and their positions (these are tirades from Maidan from 28 February 2014 of the year: No landings from the Maidan. No extremist statements. It is necessary to give any promises and guarantees to the scum and make any concessions. And hang ... hang them need then) Dnepropetrovsk businessman Boris Filatov (the one who waited the hottest phase of the Maidan outside Ukraine) on the formation of a national defense regiment in the region:

The regiment is a voluntary formation. At its base, a unit of reservists of the type of the Israel Defense Forces will be created later.

As you can see, Filatov’s plans are more than ambitious ... Isn’t it possible with the help of the Dnepropetrovsk regiment that he “later” is going to “hang” the inhabitants of Crimea?

By the way, about the Israel Defense Forces - one can not get into it either for health reasons, or because of the status of a repatriate of a certain age (including if there are children), or for religious beliefs (which, however, not always official Jerusalem takes into account ).

Judging by the comments of Mr. Filatov, in the Ukrainian “IDF” there are no restrictions even for health reasons - the main thing is to reach the Dnipropetrovsk regional administration. Well, if you don’t walk around yourself - for the number of people they will inform and arrange, as expected, “fellow soldiers” ... What this regiment will do at first - wait so ... Wait for the “probable Russian invasion”. Apparently, it will take a long time to wait, if they themselves do not decide to speed up the process of the enemy’s arrival with the help of another provocation from the new “authorities” from Kiev ...

By the way, in Ukraine today the idea of ​​not only creating under the regional administrations and village councils “national defense regiments” of all those whom the military registration and enlistment offices did not take, but also the idea of ​​increasing the material support of the army with alternative methods is being actively exaggerated. For this on the mentioned site “Ukrainian Association of Weapons Owners” it is proposed ... to sell AKM from military warehouses for those who wish, quotation "normal price". At the same time, the author of the idea explains why it is necessary to sell AKM, and not, for example, AKMS - it turns out that it is impossible to wear the machine secretly ...

Quotes from the same:

Cartridges when traveling to the shooting range to sell at cost.

Well, a practical shooting instructor can really be paid for budget money.

You see, in another year we will get a fully combat-ready and well-trained and patriotic army.

Fast and cheap, and most importantly for the people's money!

Yeah. If this is not irony, then the IDF with all its Jewish accounting color, as compared with such hypothetical Ukrainian divisions, is exactly resting ... In principle, for greater economy, one could suggest “to take away the machine gun from the enemy”. That's just about where the true enemies of Ukraine are sitting today - no one was told ...