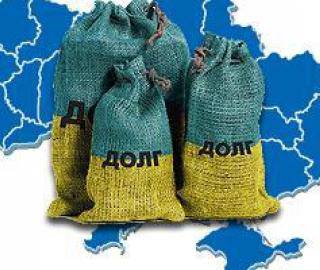 Events on the political arena of Ukraine for the world media today are clearly more important than what is happening with the economy of this country. Meanwhile, experts have long been predicting a default for Ukraine, the new government recognizes that the treasury is empty, and Russia makes huge sums to the unhappy “neighbor” for gas. REGNUM today, 26 March, provides readers with a review of Ukrainian media materials on the current economic situation in the country.


The first and one of the most important topics on the information agenda is the issue of gas independence of Ukraine. The newly appointed Minister of Economic Development and Trade of Ukraine, Pavel Sheremeta, has already stated that the Ukrainian people will now have to explain that "in fact, you have to pay for gas." But you need to pay for gas, Sheremet explains, because this is the "price" of Ukrainian independence. “Ukraine agreed on a gas discount in December, but sacrificed freedom. After we paid such a gigantic price for our freedom, we will pay for gas,” the League’s Finance newspaper quoted the minister as saying. (On March 25, the de facto Minister of Energy of Ukraine Yuriy Prodan announced that the country intends to pay gas for Russia under the Kharkov agreements, which provided for the $ 100th discount per thousand cubic meters in exchange for a stay extending the base of the Black Sea fleet in Crimea - approx. IA REGNUM)

With their statements, American and European politicians only fuel Kiev’s ambitions for energy autonomy towards Russia. According to UNIAN, the special envoy and coordinator of the US Department of State for International Energy, former US Ambassador to Ukraine Carlos Pascual said that Ukraine could become independent of Russian gas supplies before 2020. It is quite realistic if, according to the former US ambassador, production from existing wells and from new fields increases, which can bring additional 12 billion cubic meters per year, and if Ukraine has the opportunity to develop plans for (reverse) energy supplies from the West ".
According to the Ukrainian publication finance.ua, Polish Prime Minister Donald Tusk at a meeting of the National Council of the Civic Platform Party stated that the Energy Union is being formed in the European Union, of which Ukraine should also be a part, so that no one in the future could ever blackmail a great nation with prices gas or gas supply. "

“This is not a conversation about economics,” says the publication of Tusk, “this is not a conversation about my favorite water in a faucet, although warm water and light in Polish houses will also depend on it, but this is a fundamental sense of security in Poland and Europe.” Ukrainians need to be prepared to pay more for their “fundamental sense of security” from the 1 in May on 2014.

As the first deputy head of the budget committee of the Verkhovna Rada, Oksana Kaletnik, the Cabinet of Ministers and the IMF, has discussed the publication of Segodnya, the possibility of raising gas prices for the population by an average of 55-70% is being discussed. According to the publication, the cost of "communal" with the gas price for "odnushki" (30 sq. M) will increase by about 25%: well, that's the cost of a private house (100-110 sq. M), if it is completely on gas , will increase by all 50-60% ". At the same time, the cost of utility services will grow to 2017 year." In 2015, the price of gas and heating for the population may increase by 40% after the increase this year, and in 2016-2017-m - still on 20% ", - quotes the official" Freedom ".

Recently, the Minister of Economic Development and Trade, Pavel Sheremeta, made a statement that Ukraine is able to increase GDP almost three times in seven years. "Now we have GDP - $ 3,6 thousand per capita. That is not enough. I said that in 5 years we can reach $ 10 thousand. That is, in fact, it’s about growth in 2,7 times. And this is not fiction", - cite the Minister of Ukrainian media.

Meanwhile, the Ministry of Finance of Ukraine notes that the budget only has enough money for top-priority tasks. According to the Minister of Finance of the country, Alexander Shlapak, the fall in GDP may be 3%.

To stabilize the economic situation in the country, the Ministry of Economy has developed a draft of activities "100 days - 100 government steps." According to Forbes Ukraine, the program provides for measures aimed at reducing budget expenditures. The increase in revenues to the state budget is assigned to international donors, privatization and the rejection of tax incentives, the newspaper writes. In addition, the “100 steps of the government” will also be turned towards the creation of favorable conditions for business in the country. “First of all, this is a question of automatic VAT refund, liberalization of the foreign exchange market, the introduction of EU standards and technical regulations,” the Ukrainian version of Forbes reports. “In the energy sector, the energy market will continue to be reformed, electronic auctions on access to networks will be introduced, cross-subsidies eliminated and gradually increased electricity tariffs for the population, as well as coal exchange trading was introduced. "

For some reason, the Ukrainian media has diligently ignored the new media package. The Internet edition "Obkom" is one of the few who commented on the measures proposed by the government. The publication writes that "the overwhelming majority of the measures prescribed in this document can not be implemented in 100 days, or even in a year." It is hardly worth stuttering, for example, about refusing to subsidize coal output, the Obkom believes, while the Donbas is so sausage. The dismantling of this subsidizing system will last at least five years, notes the Ukrainian media.

In addition, the Obkom claims that middle class representatives who became the main driving force behind the events of the last four months “expected pleasant things such as lowering fiscal pressure and deregulation, but received another tightening of belts under the fresh slogan“ Homeland is in danger! ” disappointment with the new government in the midst of its “nuclear electorate” must necessarily be taken into account, at a minimum, without aggravating it. ”

But it is actively discussed in the media space of Ukraine, what will be the financial assistance of the IMF, whose mission is now ending its work in Kiev. According to the latest data, the volume of emergency assistance of the International Monetary Fund to Ukraine can range from $ 15 billion to $ 20 billion. The negotiation process remains outside the media coverage: de facto, Prime Minister of Ukraine Arseniy Yatsenyuk immediately promised that Ukraine will fulfill all the conditions for obtaining a loan, and the government cheerfully reports that the collaboration is going well.

The Ukrainian version of "Arguments and Facts" undertook to dispel the myths that arise around the requirements of the IMF. For example, between negotiators, "the moratorium on the sale of agricultural land is not being discussed," the publication says. However, the Minister of Agrarian Policy and Food of the country, Igor Shvaika, in an interview with UNIAN confirmed the information that one of the conditions for granting a loan to the IMF is the launch of a land market in Ukraine. And despite the assurances of Yatsenyuk of readiness to accept any conditions, the Ukrainian government is not eager to open the Ukrainian land market. “It’s necessary to understand how the land market is ready for a possible discovery, in what form it will work and what the mission of the State Land Bank will be at the same time. Theoretically, everything looks beautiful, but practically we understand that the unpleasant can hide behind a beautiful appearance,” words of the Minister of Agrarian Policy and Food of Ukraine UNIAN.
Local media practically do not consider possible scenarios for the development of the Ukrainian economy. One gets the feeling that they are ready to discuss anything other than strategic issues important to their state. Mr Yatsenyuk made life easier for local journalists by announcing back in February that the state treasury of Ukraine is empty. Apparently, therefore, the media are busy counting in the Russian treasury. In this case, economists are like a wave of a magic wand and a wave of the same wand begin to make terrible predictions about Russia's economic future and infinitely calculate "what price Putin will pay for the annexation of Crimea." The concern of Ukrainian publications about Russian taxpayers, their "wallets" and "pockets" is especially touching.

"Investments in the peninsula are tentatively estimated at 40-60 billion dollars in the near future, with funds pulled out of the wallets of ordinary Russians," writes UNIAN. He is echoed by the Ukrainian Glavred: "Tens of billions of dollars will have to be pulled out of the pockets of Russians."
UNIAN published a disappointing outlook on the Russian economy: rising prices followed by a deepening economic crisis. “The consequence of which, as a rule, is a political crisis. Thus, difficult times await the“ Slavic brother, ”especially taking into account the state’s“ integrity ”in the national aspect. In such a situation, the Crimean people will not envy the fate,” the Ukrainian journalists write knowingly .
The local publication gazeta.ua writes that "in three years Russia will disintegrate because of its exhausted economy." The reason is the global isolation of the country. There will be enough reserves for half a year, then the Russians are waiting for a price increase, then - even worse. "After that, riots will arise. And among Russians there are a lot of radicals and really neo-fascists. They will start to organize robberies, to smash everything. The authorities will use force, then the processes of segregation of the republics will begin," gazeta.ua writes, it still seems about Russia.

Also, the publication reminds that in Ukraine begins a boycott of products from Russia: "If 90% of Ukrainians will not buy Russian goods, then Russia will lose 12 billion more dollars."

“Economic patriotism,” as the Ukrainian media put it, rallied ordinary Ukrainians. They decided to independently conduct a war against the enemy’s economy, declaring a boycott of goods of Russian origin, the proceeds of which will be spent on the acquisition of Russia "tanks, Armored personnel carriers, weapons"As the publication ubr.ru notes, in the supermarkets of Kiev there was even an action" Not a penny to the invaders "," The Russian bought it - paid for the war. "

Ukrainians have a thorough approach to military actions: as noted by ubt.ru, on the social network Facebook, you can find the “Participant’s Guide to a Boycott of Russian Goods”, “where detailed instructions and lists of products of“ hostile ”production by categories and brands are offered.”

However, alarming news leaked to the Ukrainian media the other day. news: Russian manufacturers began to disguise their goods as Ukrainian. “Russian manufacturers started submitting applications for assigning Ukraine’s bar-code to their products due to the fact that domestic buyers increasingly began to ignore Russian products,” the Ukrainian Association of Distribution Networks providers told LIGABusinessInform. This means that to achieve the goal declared by the participants of the boycott - “to hit the hryvnia on the enemy’s economy” will be a bit more difficult.

Ctrl Enter
Noticed oshЫbku Highlight text and press. Ctrl + Enter
We are
A great interview with Sergey Lavrov: about Ukraine, Obama and IranWhat you didn't want to know about England
Military Reviewin Yandex News
Military Reviewin Google News
333 comments
Information
Dear reader, to leave comments on the publication, you must sign in.