Blackwater Legacy: American mercenaries from Iraq and Afghanistan are invited to Ukraine 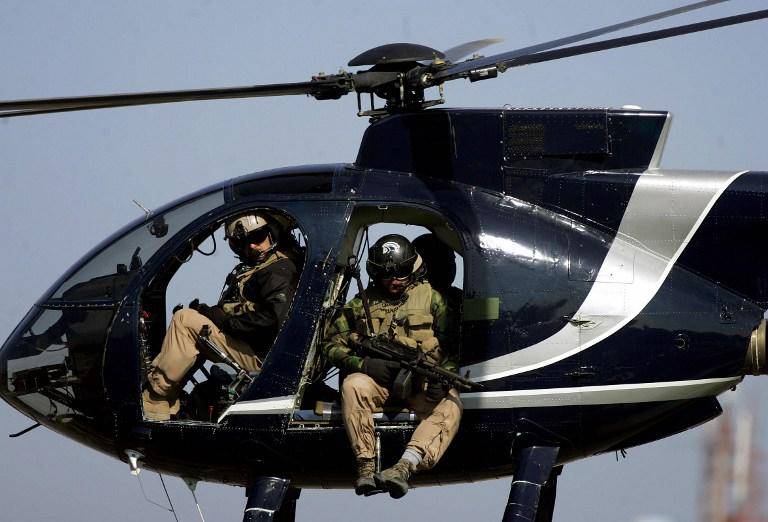 Ukrainian oligarchs Igor Kolomoisky and Sergei Taruta offered Kiev to involve the private company Greystone Ltd. to solve the internal problems of Ukraine, ITAR-TASS reported. At one time, this company originated as a division of Blackwater - an American mercenary corporation, the infamous cruelty of its employees and many crimes. According to experts, the services of mercenaries can be used in the political struggle.


Official data
Greystone reports that the company was founded in 2004 as a division of Xe Services. According to official data, “the company is engaged in providing aviation funds, as well as the supply of security services and staff training. "

“Our goal is to help your business. We work closely with you to meet your needs, ”concisely the website of a company registered in Barbados.

Dark Affairs Blackwater
Xe Services is another name for the American corporation of mercenaries Blackwater. This corporation began with a small training ground in North Carolina. The founder of the company, the former "fur seal" Eric Prince bought from the local farmers the area of ​​the swamp, where he created a private training camp. The first success came to Blackwater in 2000 year. After the attack of al-Qaeda militants on the American destroyer Cole Prince and his partners, they received a contract for training sailors.

The presence of special services veterans in the Blackwater ranks greatly facilitated the interaction between the company and the main customer. During the presidency of George W. Bush The company has become one of the largest partners of the Pentagon in Iraq and Afghanistan. To carry out particularly difficult tasks in Blackwater, they hired representatives of the “second” and “third” world - Filipinos, Bosnians and even natives of the faraway island of Fiji.

In Iraq, the actions of Blackwater attracted the attention of law enforcement. In September 2007, private army officers shot more than 17 people on the streets of the Iraqi capital who allegedly prevented the movement of the motorcade with American diplomats. Another scandalous incident was the shooting of a Blackwater employee of the security guard of the vice-president of Iraq. The company's actions also hit the spotlight in the media thanks to numerous reports of atrocities by the US military in the United States.

The head of the company - Eric Prince - was in a difficult position. He tried to take the company out of the strike, which received large payments from the US budget, reaching up to 300 million dollars. However, he was unable to avoid accusations. In 2007, Prince appeared before the US Senate Commission. In February 2009, he renamed the company to Xe Services (this name appears on the Greystone website). This did not save the former Blackwater from legal proceedings, and in August 2010, the company paid the US budget 42 a million dollars for pre-trial settlement of the case. In 2009, Eric Prince left the post of director of Xe Services, and then with the family left the United States.

Fight against democracy
Greystone could have been created in the 2010 year to "relieve responsibility," writes The Nation correspondent for the American magazine, Jeremy Scahill. According to him, the founder of Greystone could be all the same Prince. The company was originally founded in order to transfer to it all the responsibility in the event of any trouble for Prinz or his people in Iraq.

In November, 2010, the founder of Blackwater, emigrated to Abu Dhabi, reports Men's Journal. He said that journalists spoiled his plans, but noted that he was open to new proposals. They were not long in coming. In 2011, The New York Times reporters found that Prince didn’t retire, but was involved in working with mercenaries in the UAE.

According to the newspaper, Sheikh Abu Dhabi Mohammed bin Zayed en-Nahayan allegedly used Eric Prince’s advice when forming a battalion of 800 foreigners. “Such troops could have been used in the Emirates if the authorities had to face democratic protests,” the American newspaper notes. The article talked about the possible participation in the battalion of mercenaries from South Africa who were engaged in the suppression of mass unrest on the continent.

In a special note to the article The New York Times stipulates that Prince did not receive a contract for the formation of a battalion from the sheikh, but merely engaged in “observing the work and recruiting” for the sheikh's unit. The commentary also states that the founder of Blackwater is not directly related to the company that received the order to create the battalion from the sheikh.

Greystone Projects
According to official Greystone data, one of the company's offices is located in Abu Dhabi. The site of the company does not report the finished projects in the Gulf countries, however, one of the subsections of the site says that it trained 68 pilots, 29 crew members and 46 aircraft maintenance specialists "in the Middle East". In addition, the company has trained 700 employees in 10 countries, noted in Greystone. Countries and specific operations are not called.

Company website is not updated very often. The latest official report is dated 2012 year, when the company in particular engaged in the provision of security services in "Eurasia". In the text itself news it is reported that we are talking about the Caucasus. According to the search services, since 2012, the company (or its creator) has tried to carefully avoid media attention.

At the same time, Eric Prins was working to improve his image. He appeared before reporters in the fall of 2013, to talk about his book “Warriors in Civil”, in which he tried to justify the affairs of the Blackwater corporation. In an ABC interview, he even publicly regretted having worked with the US Department of Defense.

Cases in Ukraine
Member of the association of the antiterror group "Alpha" and reserve lieutenant colonel Andrei Popov reminds that Greystone Ltd. "Worked" with the Americans in Iraq. “They interact with the US special services. Those tasks for which the US intelligence services can not give a specific resolution and do not want to advertise their involvement - they assign such private armies to this, ”the expert noted.

According to Popov, Greystone will fulfill the orders of his “chefs”. “They will defend the interests of representatives of the West. Officially, they arrived by agreement with those persons who are now at the leadership of the country. They will provide special events to localize opponents of the government. They will not participate in security actions during mass events, ”the special forces veteran emphasized.

Power tool
The chief editor of the magazine “National Defense”, Igor Korotchenko, believes that the Ukrainian leadership can use the services of private companies to perform delicate tasks.

“Firstly, today there are no power tools in Ukraine to restore order. Secondly, it is necessary to suppress political opponents and to beat down the heat of protest sentiments of the Russian-speaking population in the south-east of Ukraine. Therefore, private military companies are invited - these are professionals who are able to carry out reconnaissance and sabotage actions, if necessary political assassinations, ”the expert noted.

“They work for money. In America, the most qualified private military companies are affiliated with the Pentagon and the CIA. They are formed from professionals - from officers of the special services and the armed forces. Given the involvement of the Americans, the invitation to the American company looks quite logical from the point of view of the Kiev regime, ”Korotchenko emphasized.