Last year was spent in print and online media under the publication of various materials about American robotics, in particular, they wrote a lot about the four-legged robot Big Dog. Currently, in the USA, big money is invested in the development of robotics, and the country has visible success in this direction. However, Russia has no reason to chase the “Big Dog”. Today, in our country, there are the necessary technologies and the necessary knowledge in order to move on its own way in this industry. True, to move forward, a number of large-scale tasks have to be solved, the industry has to be restored from scratch.

In Russia, there is something on which to build such an industry. We still have the foundation, our school and traditions since the times of the USSR. At the same time, the Russian school of robotics began to take shape even before the word “innovation” appeared in our language. One cannot say that everything that has been developed in the Soviet Union is irretrievably lost today. This is not true. School and traditions are still strong and hold on to a solid basis, which was laid by previous generations. 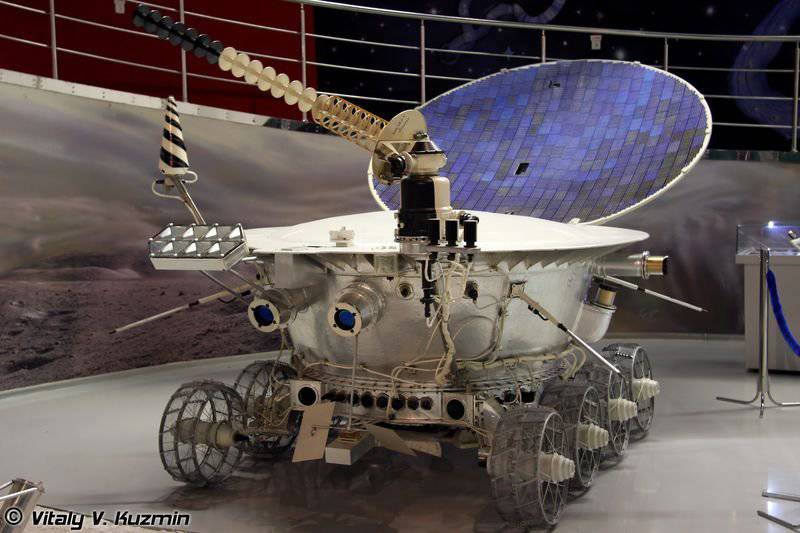 Lunokhod-1
One of the most notable achievements of the domestic robotics and science was the creation of KB them. Lavochkin "Lunokhod-1". It was the Soviet apparatus that became the first planet-navigator in the world, which successfully fulfilled its mission on the surface of another celestial body. In the West, the effect of the launch of the Lunokhod-1 was compared with the launch into space of the first artificial satellite of the Earth.

The USSR had impressive achievements in the field of the military-industrial complex. In the Soviet Union, they didn’t spare money for the defense industry; therefore, the country created truly revolutionary samples for its time. One of them was the unmanned reconnaissance drone DBR-1, which was adopted by the USSR Air Force as early as 1964. DBR-1 was intended for the implementation of long-range unmanned radio engineering and photo reconnaissance areas. Such a device, being launched from the western regions of the country, could carry out reconnaissance tasks over the entire territory of Western and Central Europe.

The Soviet Union achieved tangible success in the development and production of industrial robots. In 1973, the country launched a program of the State Committee on Science and Technology, which included the development and introduction of industrial robots into production. The program brought the first fruits already in the five-year period of 1975-1980. During this time, the Soviet industry has mastered the serial production of 40 models of robots. In 1980, the first pneumatic industrial robot MP-8 with technical vision and positional control appeared in the country. By the end of 1980, 6 of thousands of robots worked in the Soviet industry, which made up 20% of their global number. By the end of 1985, the USSR was in the lead in this area, the number of industrial robots in the country exceeded 40 thousand, which was 40% of their global number and exceeded the number of robots used in the USA several times. 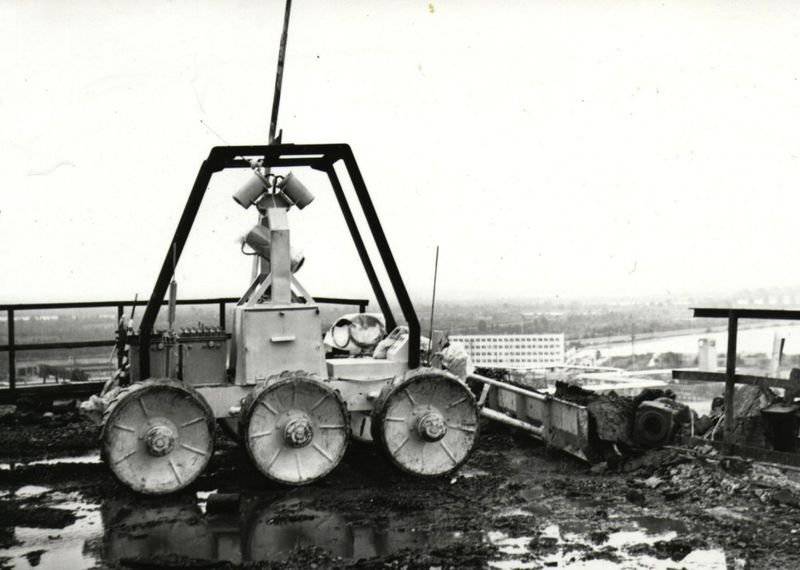 The development path of robotics

With all the diversity and abundance of materials on robotics in Russia, the concept of using them in the interests of the armed forces is hardly discussed. In such a situation, when there are no clear answers, how and what future combat robots will be used for, what capabilities they will have, what tasks to solve, it is impossible to fully develop robotic complexes. In order to rectify this situation and designate the direction of development, the Advanced Research Fund was established in Russia. The main tasks of the Foundation are to support promising scientific developments and research in the field of the country's defense, which will enable the development of breakthrough, unparalleled technologies of military, special, and dual-use.

According to Vladimir Putin, the Advanced Research Foundation has already reviewed more than 1000 various scientific and technical proposals, from which 77 promising projects were selected. For 12, priority projects have already begun the process of their implementation in practice. In 2014, the Russian budget allocates a billion rubles to 3,5 for these purposes. This fund should become a kind of elevator for the most promising defense innovations. Also, according to Dmitry Rogozin, in 2013, in Russia, a special interdepartmental working group "Robotics Laboratory" was created at the Military-Industrial Commission. This group plays the role of a kind of integration platform and a center of competence between customers of robotics, science and industry. 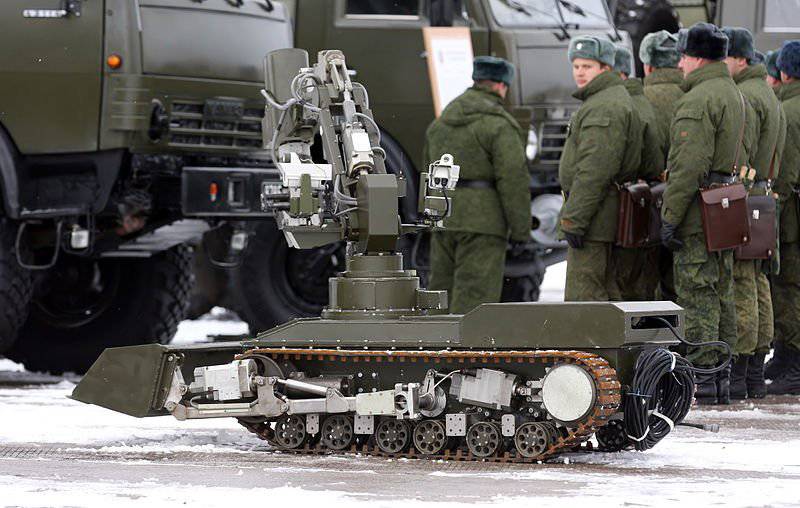 MRK-RC, mobile robotic complex of radiation and chemical reconnaissance
At present, most of the robots entering the armament of various countries of the world are controlled platforms on which various video cameras, reconnaissance sensors, special means or weapon systems are mounted. No matter how perfect these mechanisms would be, in fact, such a philosophy is fundamentally no different from the Soviet “Teletancans”, which were not just produced, but were in service with the Soviet army in the 30-40s of the last century. The work of each such robot is often provided by a whole division, it is worth noting that this approach is already morally obsolete.

It is possible to expand the combat capabilities of army units not only by giving them robotic systems and equipment, but also by developing and creating an intelligent control system. weapons and technology, creating a kind of "soldierly intellect" system, which will make the robot a full-fledged element of the combat unit, creating a "man-computer" interface. That is, the achievement of such a situation, when one soldier will be able to control several robots at once, and not several military people with one machine. To do this, we need a smart robotics, which can perform all the tasks in the most autonomous mode with minimal load on the operator.

The artificial intelligence of new robots is mainly effective algorithms of machine vision, as well as mathematical models of recognition of various images. Modern robots should not just see the picture and transfer it to the operator, they should independently recognize certain objects on it, be it a terrorist in a crowd or an enemy tank. At the same time, Russia has always been famous for its achievements precisely in the field of mathematics. The Russian school of mathematics today is one of the best on the planet. At the same time, mathematics is the science that has to solve one of the main tasks of future robotics. Its appearance will be determined not only by the designs of mechanical drives and platforms, but also by the construction of differential equations. 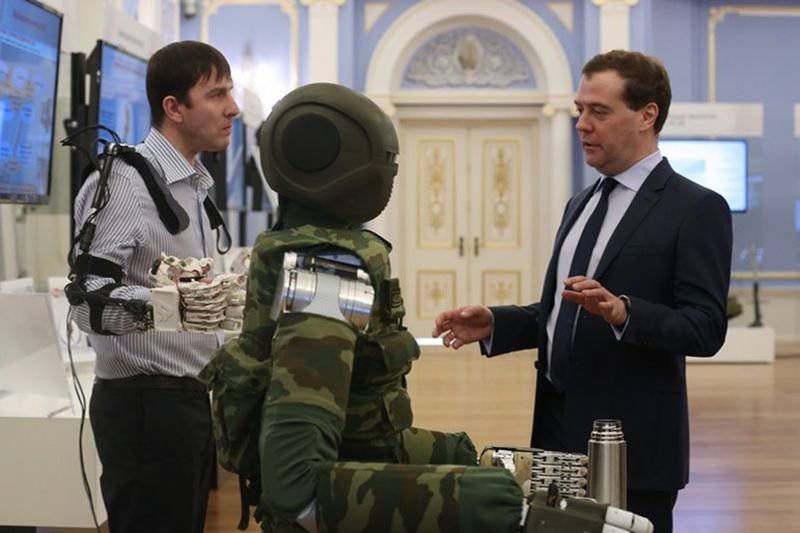 Russian robot android SAR-401
At the same time, today our country is one of the leaders in the development of machine vision technologies. In the past few years, many foreign high-tech companies are striving to enter the Russian market in order to purchase the appropriate technology or place orders in our country for advanced research in this area. The first industrial robots with technical vision were created in the USSR back in 1980.

In addition, modern robots should be able to act in a group. We have been working on this problem for a long time in our country too. Back in 1983, the unique P-700 “Granit” anti-ship complex was adopted by the USSR Navy. A feature of the complex was the fact that during a salvo launch of missiles, they can independently line up in battle order and during the flight exchange information among themselves, independently distributing targets. In this case, one of the missiles of the complex can play the role of a leader, occupying a higher echelon of attack.

In a year, testing of the android robot will begin in Russia

Deputy Prime Minister Dmitry Rogozin, who oversees the development of the Russian military-industrial complex, believes that robots today should be not only smart, but universal. At the same time, androids are the most versatile - anthropomorphic (human-like) robots that can completely replace a person in the future, working with various standard tools, for example, with surgery, or using various weapons. At the same time, one robot-android will be able to solve a very wide range of tasks - combat operations, demining, searching for various objects, rendering medical assistance, etc.

Rogozin notes that in this area, Russia has a significant technological reserve and achievements, including those that have no analogues in the world. According to him, in the near future, the Advanced Research Foundation will begin implementing a project to develop a basic anthropomorphic robotic platform. Already, it is reported that the Russian-made Android will have a whole range of features - these are “sensitive” manipulators, control using a copying suit, and a modern 3D vision system. It is reported that the operator will be able not only to transmit his movements absolutely exactly to the robot, but also to receive feedback from him, which will allow him to control well the effort when capturing various objects. In practice, this is the implementation of the avatar project, when the android operator can control the robot from a distance. 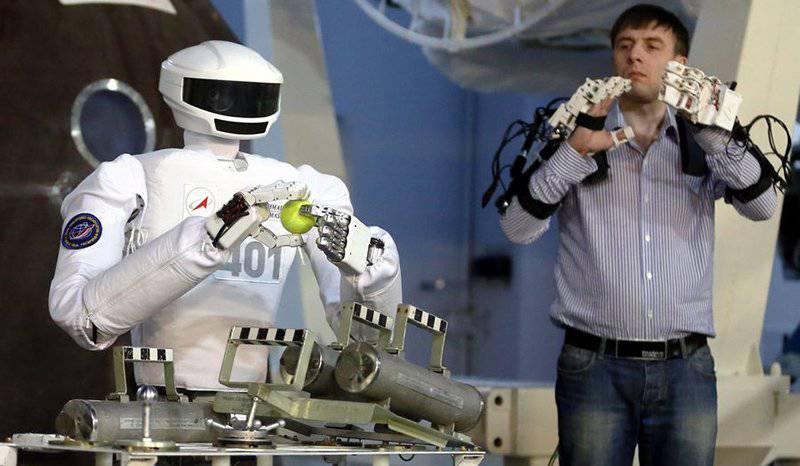 Russian robot android SAR-401
According to Dmitry Rogozin, the first phase of work on this project is planned to be completed already in 2015. The result of the first stage will be testing the android robot in the field. Android will have to do work using a variety of tools, overcome an obstacle course, and drive a car.

The first sign of this project was the Russian anthropomorphic space robot SAR-401, which was presented to the public on November 27, 2013, at the Cosmonaut Training Center (CSC) located in Star City. In the future, this robot is planned to be sent onboard the ISS, where it will be used to perform various jobs in open space. As Vyacheslav Sychkov, the executive director of the project developer of the project “Android technology” NGO, told SAR-401, the prototype was created in 2013, currently various technologies are being developed with the help of this robot.

An important advantage of the anthropomorphic robot SAR-401 developers called high precision movements. The principle of operation of this device is based on the repetition of the movements of a human operator, who is dressed in a special suit. According to Vyacheslav Sychkov, the robot operator can be located onboard the ISS or even on Earth, while the robot will work in outer space. Responding to questions about the cost of SAR-401, Sychkov said that the work on the project has not been fully completed, so the cost of the robot cannot be talked about yet. At the same time, he stressed that the Russian android will be much cheaper than its American counterpart. The developers hope that in the near future their robot-android will be able to perform up to 90% of all work on board the International Space Station.