In space in a spiral 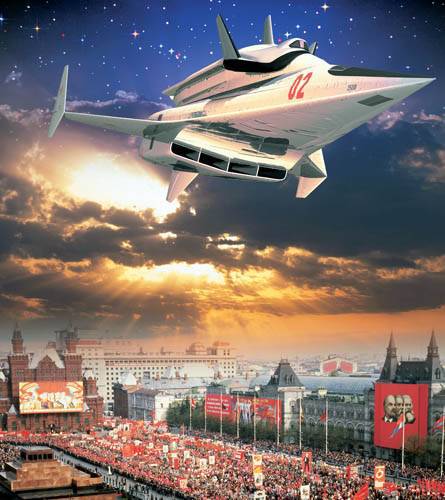 In the middle of the last century, manned rocket aviation, gradually mastering new speeds and heights, she was able to come close to the threshold of space.

The Americans achieved their first success: October 14, test pilot Chuck Iger on the X-1947 experimental rocket plane, dropped from the “flying fortress” B-1, overclocked with the help of a rocket engine working on alcohol and liquid oxygen, for the first time exceeded the speed of sound, and Already 29 of December 12 of the year, he reached the maximum speed of 1953 km / h (M = 1) at an altitude above 2655 km on an improved X-2,5 rocket-plane. In 21, tests of the X-1953 rocket planes began, on which the 2 of July 25 of the year reached a record speed in horizontal flight of 1956 km / h, and in early September of 3360 of the year - the height of 1956 38 m. 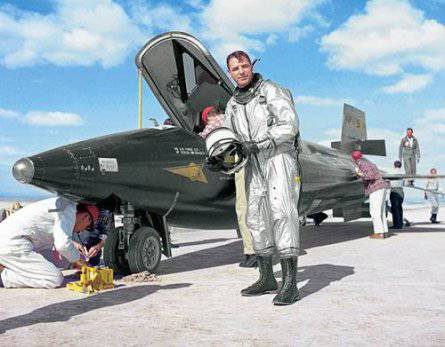 Major Robert White before the start. In total, White made 16 flights on the X-15, setting world records for speed and altitude several times. The X-15 rocket launcher was a model of trouble-free and efficient by the standards of space programs. Of the 199 flights for nine years, only two ended in crashes. For experimental aircraft, this is an unsurpassed achievement.

Inspired by the success of X-15, the US Air Force began the development of a military space rocket in the framework of the Dyna-Sor project (Dyna Soar - from Dynamic Soaring - Dynamic Take-off). The rocket plane, called X-20, was supposed to fly at a speed of 24 000 km / h and was, in fact, a development of the idea of ​​the German space bomber Zenger (see “PM” №8'2004). This is not surprising, given that German specialists occupied key engineering posts in the American space program. The new rocket plane was planned to be armed with guided missiles of the “space-space”, “space-air” and “space-earth” classes and conventional bombs. The bottom surface of the X-20 was covered with a metal heat shield of molybdenum, which withstands temperatures up to 1480 ° С, the front edges of the wing were made of molybdenum alloy, which withstands temperatures up to 1650 ° С. Certain places of the apparatus, which at the time of entry into the atmosphere were heated to 2371 ° C, were protected by reinforced graphite and a zirconium hemispherical cap in the forward fuselage or were lined with a niobium ceramic insulating coating. The pilot was located in the ejection seat, providing salvation only at subsonic speeds. The cockpit was equipped with side windows and a windshield protected by heat shields that were dropped just before the landing. A payload weighing up to 454 kg was placed in the cabin compartment. The landing gear consisted of three retractable racks equipped with skis.

But unlike the German predecessor, the X-20 was not a space plane in the truest sense of the word. It was supposed to start from Cape Canaveral in the traditional way at the top of the Titan-IIIC rocket, which launched the rocket plane into orbit 97,6 km altitude. Next, X-20 had to either accelerate itself, using its own rocket engines, or, having completed an incomplete turn, to plan at Edwards airbase. It was planned that the first drop from the B-52 aircraft would be made already in 1963, the first unmanned flight would take place in November of the 1964 year, and the first manned flight - in May of the 1965. However, this military program quietly died earlier, unable to withstand the competition with a simple and cheap solution - sending astronauts into space on a ballistic missile in a sealed capsule carried out by the civil organization NASA. 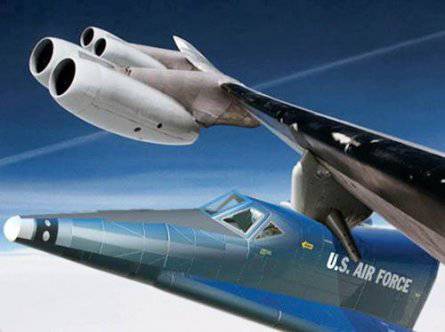 The initial tests of the X-20 Dyna Soar included the launch of a rocket plane from under the wing of an ultra-long-range B-52a bomber-bomber - an aircraft built specifically for the X-15 research project.

Ironically, it was at that moment when the Americans closed their program of manned rocketplanes, the USSR, impressed with the X-15 records, decided to “catch up and overtake” America. In 1965, the OKB-155, Artem Mikoyan is assigned to lead the work on orbital and hypersonic aircraft, more precisely, on the creation of a two-stage aerospace system "Spiral". The topic was led by Gleb Lozino-Lozinsky.

The 115-tonne Spiral consisted of a 52-ton hypersonic accelerating aircraft that received the 50-50 index and an 8,8-ton manned orbital aircraft (the 50 index) located on it with a 54-ton two-stage rocket accelerator. The accelerator reached the hypersonic speed 1800 m / s (M = 6), and then, after separating the steps at a height of 28 – 30 km, returned to the airfield. The orbital plane, using a rocket booster operating on hydrogen fluoride (F2 + H2) fuel, entered the working orbit. 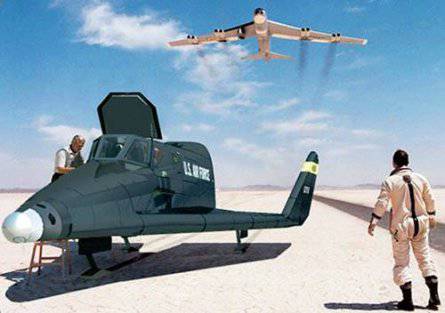 Fantasy artist on the theme "Rocket X-20, made a successful landing in the desert."

The crew of the spreader was housed in a double sealed cabin with ejection seats. The commercial aircraft, together with the rocket booster, was fastened on top in a special box, with the nose and tail parts being closed with fairings.

The spreader used liquefied hydrogen as fuel, which was supplied to a block of four AL-51 turbojet engines developed by Arkhip Lyulka, having a common air intake and working for a single supersonic external expansion nozzle. A feature of the engines was the use of hydrogen vapor to drive the turbine. The second fundamental innovation is an integrated, adjustable hypersonic air intake, which used to compress the air entering the turbines almost the entire front part of the lower wing surface. The estimated range of the propeller with a load was 750 km, and when flying as a scout - more than 7000 km. 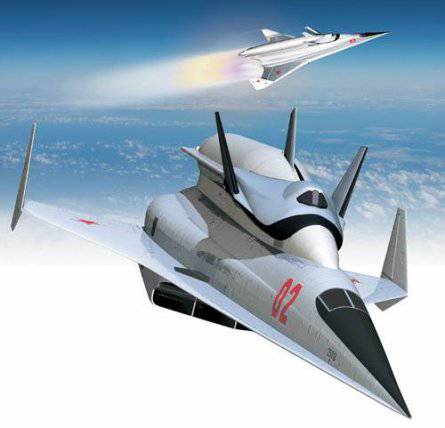 A combat reusable manned single-seater orbital plane of length 8 m and with a wingspan of 7,4 m was carried out according to the “carrying body” scheme. Due to the chosen aerodynamic layout, only 3,4 m was required for the swept wing consoles of the total span, while the rest of the bearing surface correlated with the width of the fuselage. The wing consoles when passing through the plasma formation site (launching into orbit and the initial descent phase) were deflected upward to prevent their direct flow around by heat flow. At the atmospheric descent, the orbital plane was spreading its wings and shifted to horizontal flight.

Orbital maneuvering engines and two emergency rocket engines operated on high-boiling fuel AT-NDMG (nitrogen tetraxide and asymmetric dimethylhydrazine), similar to that used on combat ballistic missiles, which was later planned to be replaced by more environmentally friendly fluorine-based fuel. The fuel supply was enough for a flight of up to two days, but the main task of the orbital plane was to be carried out during the first 2 – 3 turns. The combat load was 500 kg for the reconnaissance and interceptor variant and 2 t for the space bomber. Photographic equipment or rockets were located in the compartment behind the detachable cockpit-capsule, which ensures the pilot’s rescue at any stage of the flight. Landing was carried out using a turbojet engine on an unpaved airfield with a speed of 250 km / h per manufactured four-post ski chassis.

To protect the apparatus from heating when braking in the atmosphere, a heat shield metal screen was made of heat-resistant steel VNS plates and niobium alloys located on the principle of "fish scales". The screen was suspended on ceramic bearings, which played the role of thermal barriers, and when the heating temperature fluctuated, it automatically changed its shape, maintaining position stability relative to the housing. Thus, in all modes, the designers hoped to ensure the constancy of the aerodynamic configuration.

A one-time two-stage launching unit docked to the orbital plane, on the first stage of which there were four rocket rocket engines 25 tf, and on the second stage - one. For the first time it was planned to use liquid oxygen and hydrogen as a fuel, and later to switch to fluorine and hydrogen. The steps of the accelerator, as the aircraft was put into orbit, were successively separated and fell into the ocean. 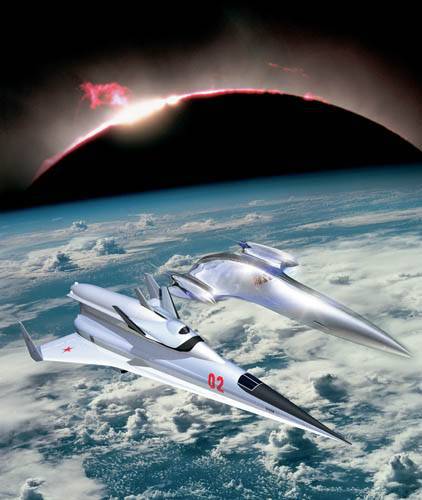 Do you think that Star Wars artists were inspired by the proportions of Spirals when designing the Queen Nabu yacht? Today this beauty can be seen in the Central Museum of the Air Force of the Russian Federation in Monino

The work plan on the project envisaged the creation of an analogue of an orbital plane with 1968 km altitude and speed M = 120 – 6 dropped from the Tu-8 strategic bomber, an original response to the American record system B-95 and X-52 by 15.

By 1969, it was planned to create an experimental EPOS manned orbital plane having a complete similarity with a combat orbital plane that would be put into orbit by the Soyuz carrier rocket. In 1970, the accelerator was supposed to start flying, first on kerosene, and two years later on hydrogen. The complete system should have been launched into space in 1973. Of all this ambitious program at the beginning of the 1970-s, it was possible to build only three EPOSs - one for studying the flight at subsonic speed, one for supersonic research, and one for going into hypersound. But it was destined to rise in the air only to the first model in May 1976, when in the USA all similar programs were already curtailed. Having made a little more than a dozen sorties, in September 1978 of the year after an unsuccessful landing, the EPOS received minor injuries and did not get more into the air. After that, and so little funding for the program was curtailed - the Ministry of Defense was already in full swing developing the next answer to the Americans - the Energy - Buran system.

Despite the official closure of the program "Spiral", the labor expended was not in vain. The created groundwork and acquired experience of working on Spiral greatly facilitated and accelerated the construction of the reusable Buran spacecraft. Using the experience gained, Gleb Lozino-Lozinsky headed the creation of the Buran glider. The future cosmonaut Igor Volk, who performed flights on the subsonic analogue of EPOS, subsequently first took to the air the atmospheric analogue of the Buran BTS-002 and became the commander of the Buran test pilot squad.

Ctrl Enter
Noticed oshЫbku Highlight text and press. Ctrl + Enter
We are
The history of the future: how humanity makes its way into spaceState and private space: Russia's competitive opportunities
Military Reviewin Yandex News
Military Reviewin Google News
26 comments
Information
Dear reader, to leave comments on the publication, you must to register.