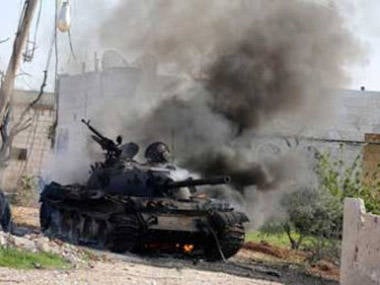 Currently, one of the hottest spots in Syria is the northern province of Latakia. The Syrian army almost completely liberated the city of Kasab, located near the border with Turkey. Persistent battles followed one of the strategic heights near Kasab, called the “45 altitude,” which the extremists briefly seized. But then the army, with the support of the people's militia forces, managed to beat off the top.


It should be recalled that a few days ago, Kasab was captured by Islamist fanatics who arrived from Turkey, and the Turkish army actively helped the militants. It should be noted that mainly ethnic Armenians live in this city.

The President of Armenia Serzh Sargsyan made a sharp statement regarding the incident. He recalled that Turkey has twice in stories undertook hostile actions against the inhabitants of Kasab, forcing its inhabitants to leave the city. The first time was in 1909, and then in 1915. “Today’s third displacement of Armenians from Kasab is a serious challenge. I think everyone should be aware that the evolving parallels themselves should be sobering for all parties, "said Sargsyan.

In addition, the head of Armenia thanked the Syrian army for its efforts to protect Kasab and instructed the diplomatic missions of his country to the UN to put the issue of an attack on the city to the international community.

The Armenian parliament sent a delegation of deputies to Syria to familiarize themselves with the events on the spot.

In Turkey, in Iskanderun province, mass protests are held against the intervention of the Erdogan regime in intra-Syrian affairs. The opposition Republican People’s Party sharply condemned the incident when Turkey shot down a Syrian plane involved in a counter-terrorist operation in the north of Lattakia province, despite the fact that the plane did not cross Turkish airspace. The party called this act an adventure, for which Erdogan is personally responsible.

As stated by the deputy leader of the People’s Republican Party of Turkey, Khalok Kuch, at the press conference, aggression against Syria is a provocation to war and a major crime.

The Russian Foreign Ministry issued an overly mild, against the background of overt aggression from Turkey, a statement about the events in the north of Lattakia province, expressing concern about the incident and calling on all parties "to restraint and inadmissibility of military escalation."

At that time, the funeral of the head of the National Defense Forces of the province of Hilal Al-Assad, who died while repelling terrorist-Turkish aggression, was buried near Latakia. His farewell on the last journey turned into a mass demonstration.

While performing their professional duty in the Kasab area, they were injured and medical workers - two nurses and an ambulance driver. SAD Minister of Health Saad An-Naif stated that two ambulance vehicles were damaged as a result of an attack from the Turkish side.

In other provinces of Syria, terrorist acts against civilians continue. So, March 23 in the Syrian capital, three mortar shells fired by gangs, exploded near the building of the Ministry of Higher Education. Two people died and 15 suffered. Another shell hit the Abu Rummani area, four citizens were injured.

In the village of Kisva, Damascus Province, two people were killed and two were injured because of the terrorist mortar shelling.

In the city of Bosra ash-Sham in the province of Daraa, as a result of a similar crime - mortar shelling - one person was killed, several injured.

24 March The attack occurred in the Palestinian Yarmuk refugee camp in Damascus - the very one whose suffering the inhabitants like to speculate about the “global community”. The mortar shell exploded on Ar-Rizhe Square in the very center of Yarmuk. Four Palestinians died, there are also wounded. This cynical crime was committed at a time when the Syrian authorities distributed food rations to people.

On the same day, in the city of Aleppo in the quarter of Al-Furqan, gangsters shelled a residential house from artisanal rockets, as a result of which one woman was killed and two girls were injured.

On March 25, gunmen shelled Al-Mutassim school, located in Al-Zahir Al-Kadima. This school has been turned into a temporary residence center for refugees. Two shells hit it, as a result, eight children were injured. Another projectile hit the An-Nidal stadium, where internally displaced people also live. Two citizens suffered.

Crimes against refugees were condemned by Sind Minister for Social Affairs Kinda Al-Shammat, stressing that the gangs repeatedly shelled temporary accommodation centers where there are people who were forced to leave their homes because of the activities of terrorists.

Mostly children, women and old people live in these centers. However, even this does not stop the so-called "opposition" and its patrons abroad, who seem to have lost all morals in their attempt to break Syria.