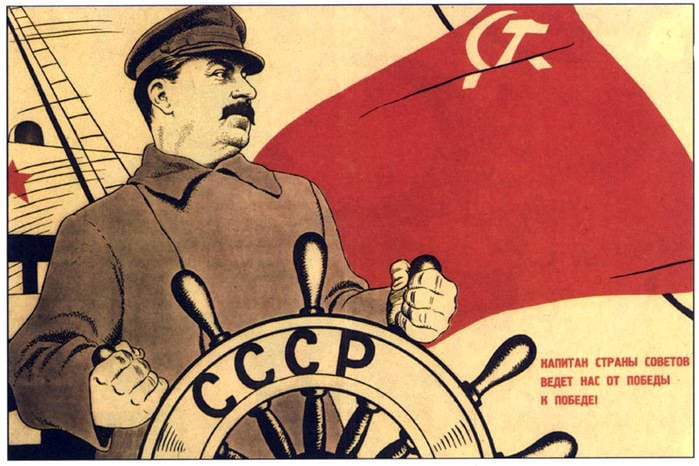 After Khrushchev's “voluntarism” and Gorbachev's “perestroika”, a third catastrophe, “de-Stalinization”, is ready to fall on Russia. Its goal, of course, is the deliberate destruction of the Russian state, its territorial dismemberment and the cessation of the existence of the Russian Federation within its current borders. Before us - the same operation, which in the period from 1987 to 1991 year led to the destruction of the USSR.

In 1990-1992, I was a member of the Moldovan parliament - first Soviet, then independent. He was Minister of Science, Education and Culture in the first government of Transnistria (1991-1992). He was in the leadership of the deputy movement of all levels "Union", speaking in favor of preserving the state, to which he swore allegiance. I saw the need to rid society and the state of the irresponsible power of the rotten apparatus of the CPSU, but in order to destroy it, I considered my own Motherland to be insanity or treason.

We, veterans of the struggle for the salvation of the Union, click combinations like "de-Stalinization", like nuts. For us, it's like two and two. Like an open book of children's comics. Therefore, today I will take the liberty to say that the conscious goals of “de-Stalinizers” are the following.

The first. The suppression, with the help of the administrative resource and the state media, of all the patriotic forces of Russia, including the democratic orientation.

The second. Repentance for “continuous Katyn” at the level of the president, the government and the Federal Assembly of the Russian Federation. It will be a large-scale remake of the 20th Congress of the CPSU, designed to destroy the remnants of pride in their country.

Third. Russia will face multibillion-dollar claims in the form of “compensations” for “occupation”, “repression”, etc. Preparations for this have already begun - just look in the media. On April 10, there were reports that Romania, inspired by what is happening in Russia, demands "to return its gold reserves, transferred to the Russian Empire in December 1916, but agrees to a cash compensation of 2 billion euros." Tajik political analyst Sulton Hamid threw down his weighty word: “If Russia decided to repent for the crimes of those years, then, as a developed country, must pay compensation to all the remaining victims of the totalitarian regime. Moreover, Russia has such financial capabilities. In world practice, such examples are available. In particular, the authorities of present-day Germany are paying the victims of the Hitlerite concentration camps. ”

Fourth. The fall of the prestige of the state institutions of Russia, both in the world (it is already after the events around Libya) and inside the country; activization of nationalists of all stripes (North Caucasus, Tatarstan, etc.). The beginning of the preparation of the dismemberment of the country under the slogan of "illegal" and "aggressive" territorial acquisitions - from the king of peas to the present day. The Lenin model of national republics introduced both in the USSR and in the Russian Federation will help ease this division.

Of course, even before the legal abolition of the existence of the Russian Federation at the highest level, the Kremlin will have to condemn the entire sovereign foreign policy, and not only the era of Stalin. All expansions of the Russian borders will be automatically condemned, and even the modern struggle for the spheres of influence of Moscow. As a result, in a number of former Soviet republics, Russian ambassadors will no longer be allowed to go further into the office of the office of the senior assistant junior assistant referent. How else? It is impossible, having condemned the Stalinist imperial policy, to continue it by other means in conditions of the triumph of democracy.

Georgian political analyst Ramaz Sakvarelidze has already explained to the incomprehensible that “in the wake of the new“ de-Stalinization ”program, Georgia may well demand from the Russian authorities to stop that policy of“ annexing and occupying Georgian territories ”represented by Abkhazia and South Ossetia.

So you have to "cleanse" and "repent." True, we, by the will of the Kremlin villains of the 1985-1991 model of the year turned out to be “abroad”, look wildly at how a rake appears on the scene, which the country attacked under Khrushchev and Gorbachev. But since история teaches nothing, let's talk further together. From our point of view, one could simply close the topic of repentance with the words of one of the US presidents: “My country is right or not, but this is my country!”

Personally, in the case of the policy of "de-Stalinization", I foresee at least five wars in the post-Soviet space.

These are the wars of Georgia against South Ossetia and Abkhazia.

This is the resumption of war in Karabakh. The head of the “Dashnaktsutyun” faction in the Armenian parliament has already stated that the “de-Stalinization” of Russia should lead to the denunciation of the Moscow and Kars treaties and the revision of the decision of the Caucasus Bureau, according to which Nagorno-Karabakh became part of Azerbaijan.

This is a civil war inside Moldova between unionists and supporters of preserving the country's independence (the latter gained moral strength, including through the very existence of a strong Russia, while their opponents at the expense of Romania). This is practically the inevitable war of Moldova against Transnistria.

In the case of Moldova and Transnistria, the bet will be placed on chaos in Russia like the 1917 of the year. With the new “de-Stalinization”, and in fact with the collapse of Russia, it is inevitable. When Russian troops in the Transdnistrian Moldavian Republic under the influence of events in Russia are demoralized, disorganized and lose their unified command (like the Russian troops of the Romanian front in 1917), a military invasion with the help of Romania may follow.

How much blood will be shed in the former USSR, how many millions of refugees will rush around the world - one can only guess.

By the will of fate, I participated in the apocalypse of the 80-90-x turn. Do not want anymore. When I was often in Moscow at that time, I was once again convinced: Soviet and Russian liberals in their overwhelming majority were and are anti-state forces. They 20 years ago openly supported the destruction of the USSR, and now they are not interested in turning Russia into a modern, dynamically developing, democratic and powerful state. In their opinion, a powerful state is hindering radical liberalism in their version, and therefore they are tirelessly working to eliminate their own country. And if so, then the attitude towards them should be appropriate.

But I saw and see all this not only me. It is therefore surprising to me that the political corpses of the 90's are again creeping out of the Gorbachev-Yeltsin caches. In my deepest conviction, they should be subject to prohibitions on professions, and during conscious subversive activities (such as appeals to give up the Kuril Islands of Japan) - prisons and camps. Moreover, foreign liberals are much more patriotic than Russian ones. The Japanese, even after Fukushima and the tsunami, stand their ground: "Give the Kuriles!". The Poles do not let Katyn out of sight and the return of Western Ukraine and Western Belarus to the Soviet Union in 1939.

The President of Russia, I hope, understands that if he accepts “de-Stalinization” at the state level, after a short time he will not be needed by the destroyers, and they will get rid of him. Just because they do not need the position of the President of the Russian Federation in its current borders. After that, the power will go on for a while to the “Liquidation Commission” (no matter how it will be called in reality), which will legally formalize the dismemberment of the state. In the 1991 year, under Gorbachev, in the USSR, the so-called State Council was created for this purpose, not provided for by the Constitution. He declared recognition of the independence of the Baltic countries.

It is equally clear that the head of the Human Rights Council under the President of Russia, Mikhail Fedotov, consciously does not his business. In Russia, as in the entire post-Soviet space, there are quite a few violations of the rights of citizens: monetization of benefits, unemployment, bureaucratic lawlessness, torture in “organs” ... But instead, the slogan “de-Stalinization” is thrown in. Why?

If you look at what is happening from the point of view of the liquidation of the USSR in the past and Russia in the present, then everything becomes logical. Joseph Stalin is a symbol of victories and the greatness of the state. On his reign is the peak of Moscow’s influence in the world, as well as the return of many previously lost lands. Kill the symbol - and you can rape the consciousness of the people, break pride in your country, and then the country itself.

Why, against the background of “de-Stalinization,” do they not particularly touch Vladimir Lenin, with the exception of the usual tryndez with a yawn about the removal of his body from the Mausoleum? Because for the terminators of both the spotted (Gorbachev) and the bearded (Fedotov) Lenin is not dangerous. He himself was in many ways similar to them, because in the name of the World Revolution (now - radical liberalism) and power contributed to the destruction of the Russian state, collected by many generations of people of different nationalities. And Stalin personified a return to many of the traditional foundations of the existence of a Power, destroyed under Lenin.

Again, I note: the scheme is the simplest, even offensive in its simplicity. From the PMR, it is like under a microscope. Surely it is not visible in Russia? The whole former USSR is offered not national reconciliation, but war. And in the very hottest version.

Above, we have already dealt with this. But let's look for a reasonable way out: I don’t like Stalin’s membership in the CPSU - throw away the propaganda of the Communist component of the Generalissimo, leave the sovereign. Here Stalin himself gives us an example: he did not rant about the exploitative nature of Alexander Nevsky, Ivan the Terrible, Peter the Great, Alexander Suvorov and Mikhail Kutuzov (who clearly were not communists), but simply initiated the filming of films about them as Russian patriots.

By the way, about Mikhail Fedotov himself. From the sad events of September 21-October 4, 1993 in Russia, some media periodically receive reports that this gentleman came to the then Chairman of the Constitutional Court of the Russian Federation Valery Zorkin and forced him to resign. The fact is that during the conflict of branches of power, Zorkin recognized Yeltsin's Decree No. 1400 on the dissolution of the Supreme Council as not complying with the constitution. It is also reported that at the same time, the current “de-Stalinizer” threatened Zorkin with physical violence from supporters of the president. At this time, the Russian parliament, shot by the presidential tanksalready blazed. Democratized, so to speak. Mr. Fedotov’s refutation of those glorious times I have never read.

We ask the question: how can the actual accomplice of the massacre sit on the Human Rights Council and even head it? What rights and what kind of person does he stand for? Of course, it's up to the president of the Russian Federation, but not only I ask such questions.

I would like to believe that the Russian leadership understands the degree of danger threatening the state. Otherwise, in years through 20, if the establishment manages to endure new streams of blood and tears of millions of people, you will have to earn a living by advertising pizza.