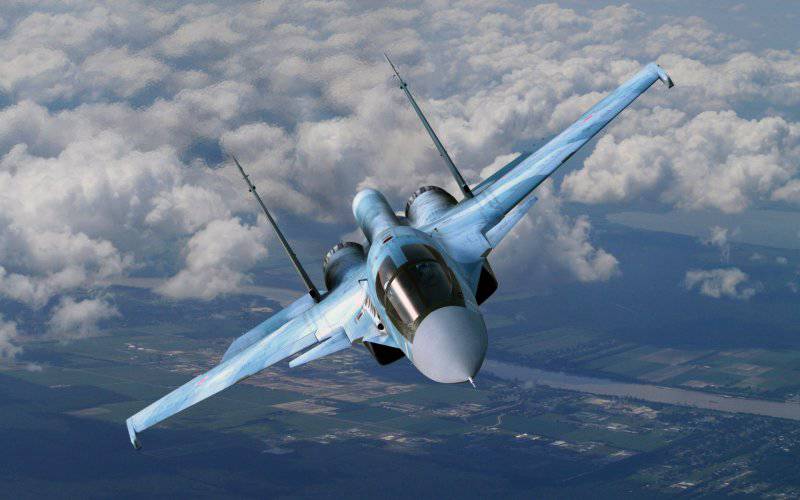 March 20 was an important event for the domestic Air Force. After many years of development and testing for service, the Su-34 front bomber was adopted. Airplanes of this type have been built serially for several years and are being delivered to the troops, however, the official adoption of the new equipment took place only a few days ago. Over the next few years, the new Su-34 should become the main front-line bomber of the Russian Air Force, gradually replacing the aging Su-24 technology.

Since the beginning of the last decade, the Su-34 has passed various stages of testing. In 2007, the Ministry of Defense accepted new equipment for trial operation. In 2008, the first contract was signed for the supply of 32 aircraft. At the same time, the second stage of state tests continued. Finally, in the autumn of 2011, an act of completion of state tests was signed, in which the Su-34 front bomber was recommended for use. A decree appeared in March 2014.

Before the new aircraft was put into service, the air force of Russia managed to get a significant amount of this technology. So, in 2013, the Novosibirsk aircraft plant them. V.P. Chkalov delivered 14 bombers to the customer and brought the total number of aircraft transferred to 40 units. The plan for the current 2014 year implies the supply of 16 machines. Last year, the first contract for the supply of new bombers was completed. Currently, Su-34 aircraft are being built in accordance with another agreement concluded in the 2010 year. This order involves the delivery of a new model of 92 aircraft. Thus, the result of the two contracts will be the construction of the 124 Su-34 front-line bombers. In the future, it is planned to continue the construction of new equipment and bring its number in the troops to 200 units.

A few years before the official adoption of the bomber Su-34 began its combat career. The first case of the participation of these aircraft in an armed conflict relates to hostilities in August 2008. According to reports, several Su-34 aircraft performed the task of electronic suppression of Georgian air defense systems. Later, information appeared according to which one of the Russian Su-34 destroyed the Georgian radar station, but there was no evidence of this.

In the spring of last year, Air International magazine reported on other instances of the combat use of Su-34 bombers. According to the publication, in the 2012, the new Russian aircraft were used to strike at the locations of militants in Dagestan and Ingushetia. The details of these operations were not disclosed, but the sources of Air International magazine in the Russian Ministry of Defense noted that the use of new technology made it possible to obtain “generally good” results, high enough for an operation to destroy targets in a mountainous area covered with forest.

For several reasons, the Su-34 aircraft turned out to be a real “protracted”. The first works to create a promising strike aircraft based on the Su-27 fighter were launched in the early eighties under the designation T-10Sh. The USSR Council of Ministers decree on the development of a new strike aircraft appeared in June 1986. The development of the idea of ​​a T-10Sh front-line bomber led to a gradual change in a number of important features of its technical appearance. As a result, this led to the proposal to develop an aircraft using new ideas in the field of assembly of units. So there was a project T-10B.

The technical project was prepared in the late eighties, and in 1989-90 years at the MMP im. BY. Sukhoi in Moscow collected the first prototype of the new aircraft. The car with the designation T-10В-1 was built on the basis of a modified glider of the Su-27UB fighter and equipped with an original double-seater armored cabin. 13 April 1990, test pilot A.A. Ivanov first lifted the new aircraft into the air. Over the next few years, continued testing and refinement promising bomber. In February 1992, the first prototype was first shown to the leaders of the CIS countries.

At the end of 1993, the first flight of the pre-production prototype T-10В-2 took place, and a year later the first plane of the experimental batch T-10В-5 took off to the sky. It was assumed that over the next few years, aircraft manufacturers engaged in the project would build an experimental series of 12 aircraft, but the difficult economic situation in the country forced them to adjust these plans. Instead of the planned dozen of airplanes in nine years, only four were able to be built, including one prototype with a complete set of avionics. In 1995, one of the prototypes of the T-10B was shown at the Le Bourget air show under the new name Su-32FN.

In the first half of the two thousandth, the promising front-line bomber again changed its name. At the end of 2006, the first Su-34 pre-production aircraft were handed over to the air force. So began the regular supply of new type of equipment to the troops. As already mentioned, the Air Force currently has 40 Su-34 aircraft. 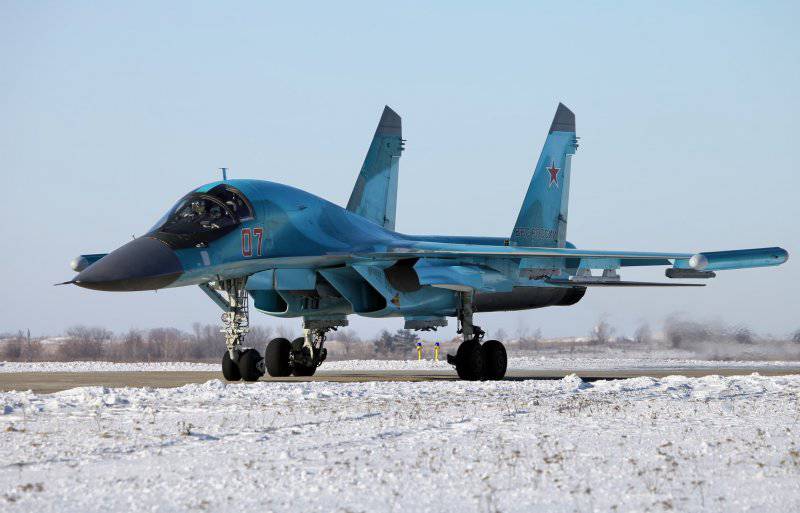 The T-10В / Su-34 front bomber was created taking into account the developments on previous projects of the T-10 / Su-27 family, which affected its appearance. The glider of the aircraft is made according to the normal aerodynamic scheme with a swept wing, two keels, as well as a full turning front and tail horizontal tail. In comparison with other aircraft of the Su-27 family, the Su-34 bomber has a larger cockpit and a different form of the fuselage, due to the specific placement of the crew and part of the on-board equipment.

A characteristic feature of the bomber Su-34 was a relatively large nose of the fuselage with a cabin. The cabin with two workplaces, located side by side, is protected by titanium armor. Cabin dimensions allow pilots to get up to their full height and warm up if necessary. In addition, in the cabin there are sanitary facilities and equipment for transportation and heating of food. All these measures significantly increase the performance of the crew during long flights.

The sighting and navigation complex of the Su-34 aircraft includes a multifunctional radar with a phased B004 antenna array, an infrared direction finder, a laser rangefinder and a television camera. It is noteworthy that the special form of the on-board radar antenna affected the outlines of the nose of the Su-34 fuselage and, as a result, led to the appearance of the aircraft’s nickname - it is often called “Duckling” among the troops. All necessary information about flight parameters, route, targets, etc. processed on-board digital computers and displayed on color multifunction displays in the cockpit.

Su-34 airplanes are equipped with two AL-31F turbojet engines with afterburner 12500 kgf. The normal take-off mass of the bomber is approximately equal to 38,2 tons, the maximum - 44,3 tons. With such characteristics, the Su-34 is capable of speeding at altitudes up to 1900 km / h. When flying off the ground with arms on an external sling, the maximum speed is limited to 1100 km / h. The combat radius with the use of outboard fuel tanks exceeds 1100 kilometers, without PTB - about 600 km. 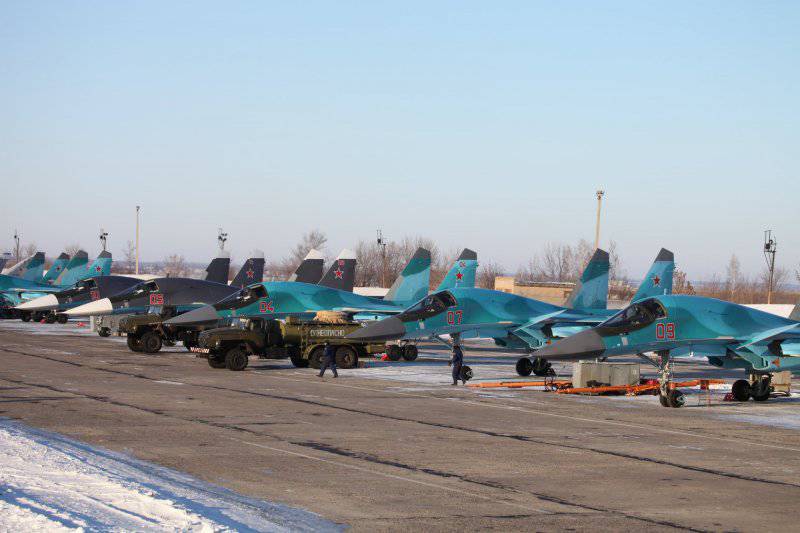 The normal combat load of the Su-34 bomber is 4000 kg, the maximum allowable weight of weapons is 8 tons. The aircraft has a built-in automatic gun GSH-301 with an ammunition load of 150 shells, as well as 8 suspension units under the wing and 4 under the fuselage. Depending on the combat mission, the bomber can use various types of ammunition. It is allowed to use unguided rockets of various calibers, suspended both in blocks, and one at a time or unguided bombs of caliber up to 500 kg. In addition, the Su-34 is capable of carrying and using the KAB-500 or KAB-1500 adjustable bombs, as well as various types of air-to-surface guided missiles. For self-defense, the aircraft is able to use air-to-air guided missiles R-27, R-73 or R-77. To perform tasks in the interests of the naval fleet Su-34 can carry beacon containers. If necessary, the aircraft can be equipped with three outboard fuel tanks of 3000 liters each.

By the end of this decade, the Air Force should receive all the ordered Su-34 aircraft, which will significantly update the fleet of front-line attack aviation. Over time, the new bombers will replace existing Su-24 aircraft, the resource of which is coming to an end. Thus, in 8-10 years, the Su-34 will become the main attack aircraft in the Russian Air Force. 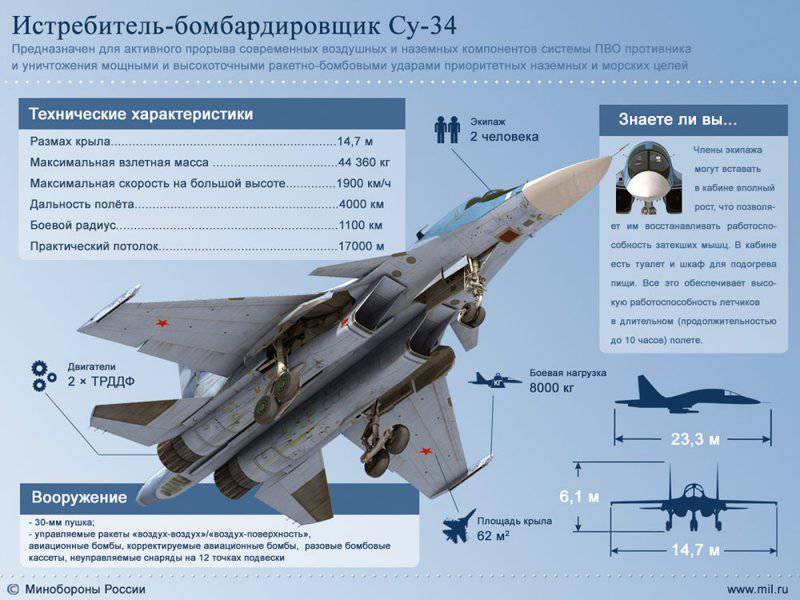