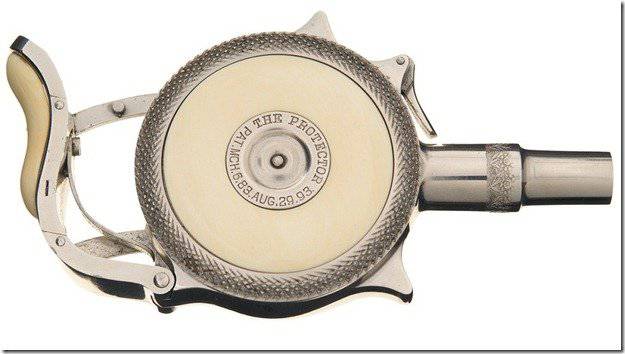 The reasons why the gun tread is placed in the section "Atypical weapon…" some. First appearance: the gun is not similar in design and layout to one of the traditional varieties of short-barreled weapons. Secondly, in some reference books on weapons it is referred to as non-automatic pistols, which is quite true if we consider the device of weapons, although at the same time in the patent and advertising of weapon companies of the middle of the 19 century both in France and in the USA it was listed as a revolver - "Protector Revolver".

The gunsmith and inventor Jacques Turbio (JE Turbiaux) registered a patent for a weapon in which the cartridges were located radially in a cylindrical holder called “Le Protector” - “Defender” (in Germany it was Patent No. XXUMX, England, Belgium, Italy and the United States Patent No. 21929 from 273644 March 06, weapons drawings are very original). 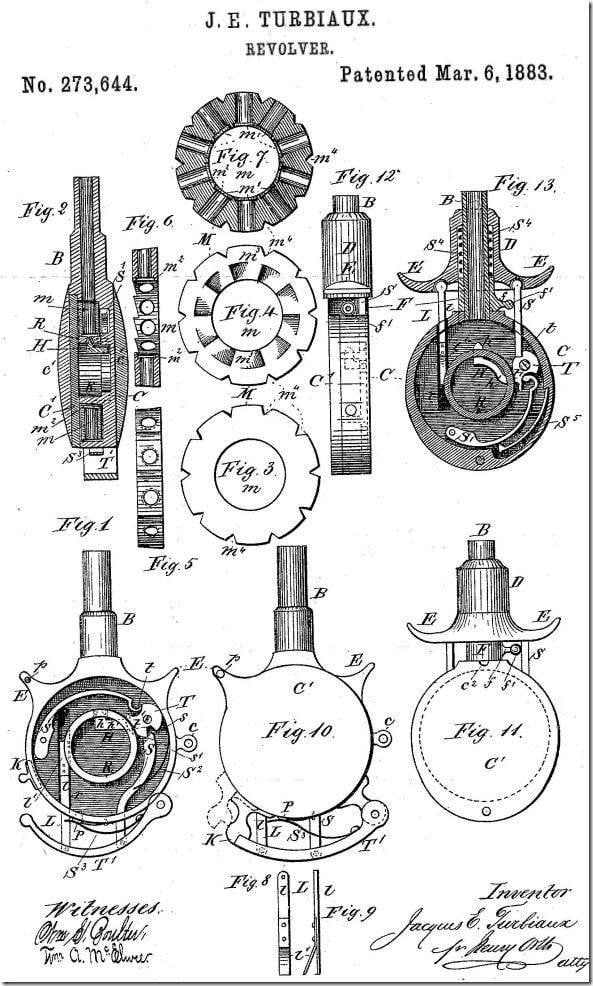 The gun has the original shape in the form of a disc with a thickness of 125 mm, diameter 50 mm. The barrel is attached to the disk, the tides for ease of holding in the hand, and the lever of the firing mechanism located on the back side of the barrel. Inside the weapon case there is a rotating block with radially located chambers for equipping with cartridges. 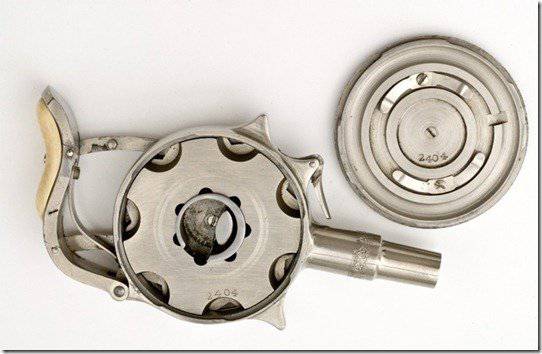 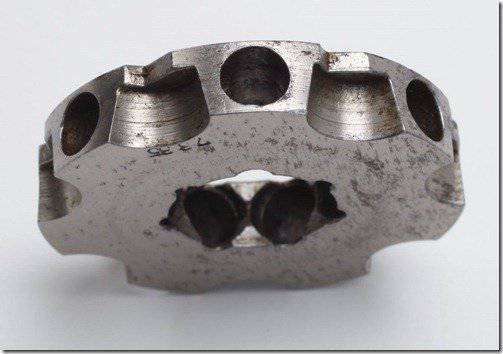 To load the weapon, the cover on the left side of the case is unscrewed, the block is removed, into the chambers of which the cartridges are inserted. The pistol unit contained 7 mm 8 caliber cartridges or 10 mm 6 caliber cartridges, depending on the type of pistol.
Holding the weapon in the hand was as follows: the trunk was placed between the middle and index fingers, the disk itself was gripped by the palm, and the palm was pressed against the trigger mechanism. 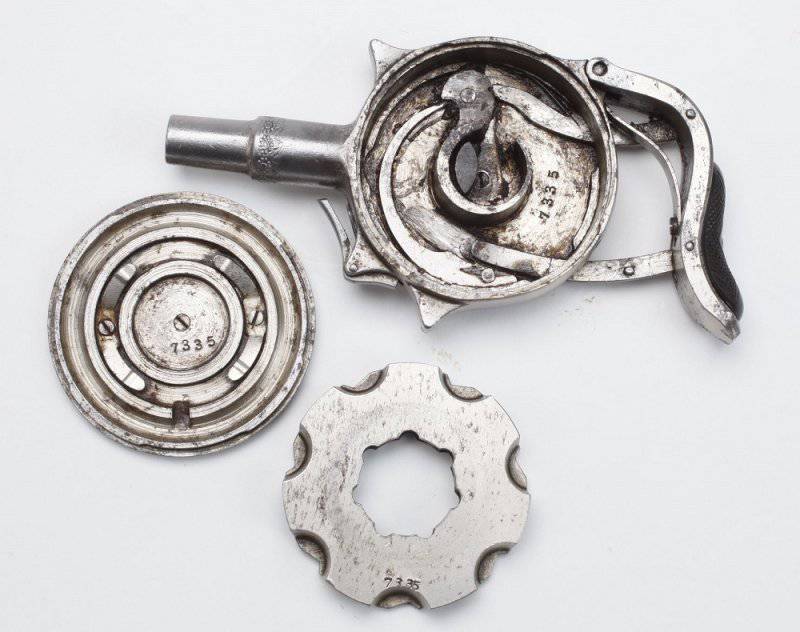 The kinematics of the pistol protector (Protector) worked as follows: after pressing the shutter lever, the camera turned, one of the cameras stood in front of the barrel bore, while simultaneously the drummer cocked and descended on the cartridge primer - a shot occurred. After the impact of the palm on the lever weakened, the spring brought the trigger lever to its original position and the weapon was again ready to fire. The last copies of the weapon were supplied with a safety device, which was located on the hull at the barrel. Individual copies of the weapon are decorated with elegant ornaments, have chrome-plated surfaces, ennobled with ivory inserts or precious woods. 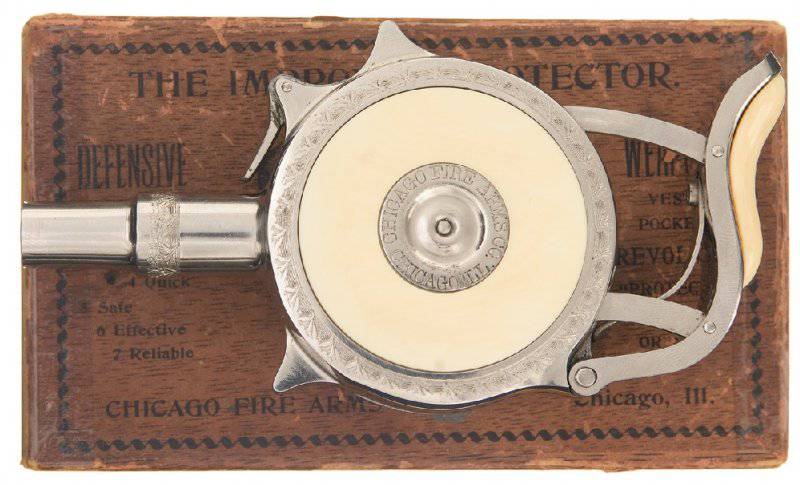 This type of weapon is also sometimes called an expander gun, for cocking and firing. The small size and reliability of the weapon made this gun quite popular, it was easy to hide and use without prior manipulation.

The gun was produced in France until the middle of the 90 of the 19 century, in 1892, the license for the production of the gun was sold to American companies. The legal disputes that arose led to the fact that very few American “Protectors” were released. American-made pistols are commonly called the Chicago Palm Pistol or Chicago Palm Protector.

Nowadays, the Protector pistol (Protector) is popular with collectors. On the surface of the weapon most often there are markings in the form of a serial number, marking of the patent and the name of the manufacturer’s company:
• "CHICAGO FIRE ARMS CO CHICAGO ILL"
• “THE PROTECTOR PAT. Mch. 6.83 AUG 29.93 »
• “LE PROTECTOR SYSTEME E. TURBIAUX”
• "EN FRANCE ET A ETRANGER PARIS B SGDG" and others
In France, produced two types of pistol:
• Large model: the capacity of a block of 7 cartridges, caliber 8mm (Turbiaux 8 mm or 8 mm Protector or even 0,32 Protector), the length of the weapon 130 mm.
• Small model: the capacity of the 10 block of cartridges, caliber 6 mm (6 mm Turbiaux or Protector), the length of the weapon 110 mm.