An open letter to the journalistic community of Russia 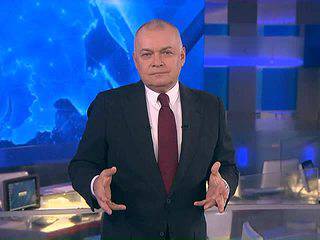 
For the first time in our common professional practice, the political structures of the European Union imposed sanctions on our colleague Dmitry Kiselev. Thus, the European Union imposed on its territory a ban on the profession for one of the most famous journalists of our country, the leading analytical program of the Russia 1 TV channel - “News of the Week”, which is watched by tens of millions of TV viewers every week.

In our opinion, this decision has neither logic nor sense. Freedom of speech and movement are declared by the European Union as the basic and inalienable values ​​of European civilization. What has changed?

Considering that no one has explained and, obviously, is not going to explain to our colleague the reasons for the imposition of sanctions, we, each and every journalist working in the world, would like to hear honest answers to the following questions:

1. Are taboo topics in Europe?
2. Is personal position in journalism punishable?
3. Examination and court are no longer needed to evaluate the activities of a journalist?
4. Is the European Union entitled to punish any journalist for his professional activities?
5. EU journalists can now expect sanctions for their views?

Without professional solidarity of Russian and European journalists, we are unlikely to get answers to these questions. And getting them is very important for the entire journalistic community, because today the foundations of our professional activity — independence of judgment and freedom of speech — are at risk.

Ctrl Enter
Noticed oshЫbku Highlight text and press. Ctrl + Enter
We are
Director General of the Russia Today Information Agency - on sanctions, Western values ​​and real liberalsRussia: the Moon, Mars and further everywhere ... Speeches of the participants of the Izborsky club in the corporation "Rosobschemash"
Military Reviewin Yandex News
Military Reviewin Google News
99 comments
Information
Dear reader, to leave comments on the publication, you must sign in.