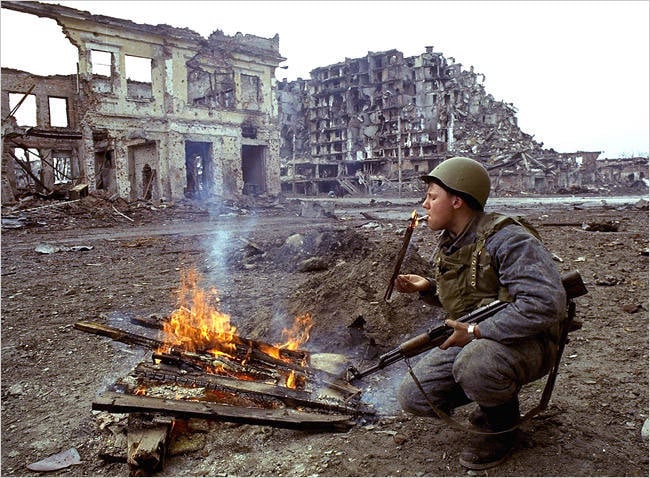 “Jihad” is the code name of the operation to assault Grozny conducted by Chechen militants in August 1996. Along with Grozny, militants attacked settlements of Argun and Gudermes, the last federal forces surrendered without a fight. From a political point of view, the storming of the city ended in a victory for the militants, who actually achieved independence after the signing of the Khasavyurt agreements. From a military point of view, none of the parties to victory won. The first days of the assault remained behind the militants, when, guided by the effect of surprise, they managed to block the city’s garrison in places of deployment, disrupt command and communications with the units. However, having recovered from the initial strike and turned to decisive actions, the Russian troops actually returned control of the situation and completely surrounded the city, but they were no longer allowed to win.

The attack on Grozny was unexpected and sudden for many, for this reason there were rumors in society that they were going to surrender the city intentionally. At least, many participants of those fights think so, although direct evidence of betrayal does not exist. Many of the participants in the events swear confusion and disunity in the military leadership of the unified command. Parts of explosives and military units sometimes openly did not recognize each other, during the conduct of military operations between the parts there was insufficient interaction, often it was absent altogether.

On June 2, in the suburbs of the Chechen capital, a sabotage group of 5 militants from the Shamil Basayev detachment was captured. During the interrogation, it was established that this group had one more task besides conducting acts of sabotage and collecting intelligence. The group was supposed to ensure the evacuation of the family members of the militants fighting in the mountains before 10 June. And this group was not the only one. The militants took the removal of their families from Grozny with the expectation that the fighting in the city could take on a heavy and protracted nature, and their relatives could suffer during the clashes. They followed the same tactic in December 1994.

Bardak mess, but there were available operational data from the special services and law enforcement agencies, it was known about some secret rooms of militants, caches of ammunition. All the intelligence information obtained as a result of interrogations of the captured insurgents, from the existing agents, lay on the table of people who were to be responsible for making decisions.

Grozny's garrison consisted of 6000 people from the internal troops and the Ministry of Internal Affairs, in addition, around 10 000, Defense Ministry troops were concentrated in Khankala and near the airport “Severny”. 22 checkpoints, 5 commandants and 2 commandant sites were deployed directly in the city. After the March events, when the militants had already made a raid on the city, a whole series of activities were carried out on the engineering equipment of the points of permanent deployment of troops. All the checkpoints were delivered ammunition, water and food. Objects that could become a target for storming, turned into strong points. However, at the same time, Grozny was and remains a fairly large city, which almost 130 roads flow to. Directly under the control of the federal forces there was only 33 of them, it was impossible to completely turn the city into a fortress. 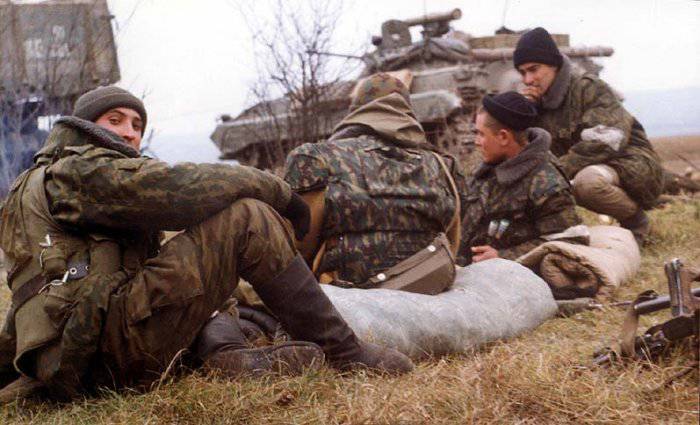 In the early morning of August 6, 1996, the detachments attacking Grozny counted about 1,5-2 thousand soldiers, but over the week of fighting their number increased to 6-7 thousand, mainly due to the transfer of reinforcements from other areas of Chechnya and the transfer to their part employees of the "Zavgaevskaya" police. The garrison of federal troops outnumbered the militants, having absolute superiority in technology, artillery and aviation.

Aslan Maskhadov, who commanded the militants who stormed the city, imposed on the federal forces an extremely unfavorable tactic for the latter. The Chechen detachments entered Grozny from different sides, bypassing the checkpoints, commandant's offices and the location of the Russian units. Militants did not aim to capture or destroy all urban objects. Having concentrated in Grozny, they blocked the units of internal troops at checkpoints and commandant’s offices, isolating them from each other, leading a constant disturbing fire, demoralizing defenders. The bandits dealt the main blow at the complex of administrative buildings in the center of Grozny (Government House, Ministry of Internal Affairs and FSB buildings), where a decent number of journalists were surrounded by the military.

Strictly speaking, the militants of Grozny did not storm, they just entered it. Rare checkpoints of the federal troops could not prevent it. The events of August 1996, hardly had analogues in the world stories. From the moment of the Battle of Stalingrad there existed such a military term as “layer cake”, which meant that the forces of the opposing sides were mixed and were very close to each other. The Grozny situation, guided by this terminology, could be called the “Olivier salad”. From 6 in August, numerous checkpoints and commandant's offices fought in the city, special forces GUINA from Yekaterinburg and non-run Chechen militiamen in the MIA building who were guarding the hotel in the center of Grozny fought back. The building of the Coordination Center was defended by soldiers of the special division of the Russian Interior Ministry "Rus".

At the same time, the units of the Ministry of Defense, stationed at the airport “Severny” and at the base in Khankala, reacted rather sluggishly to the incident. Army generals did the calculation that the militants themselves would leave the city, and were in no hurry to go to the aid of "allied" from the Interior Ministry. The first attempts to somehow change the situation in the city began to be undertaken by them only in the second half of the day on August 7, when the first armored columns were sent to help the besieged. Thus, precious time was missed. A part of the Chechen detachments managed to organize ambushes on the way of nominating convoys of federal forces. The militants did not experience a shortage of weapons, the day before at the railway station in Grozny, they managed to seize several weapons cars, including a whole car of anti-tank grenade launchers. As a result, armored vehicles of the Russian army became fairly easy prey for mobile, lightly armed militants. 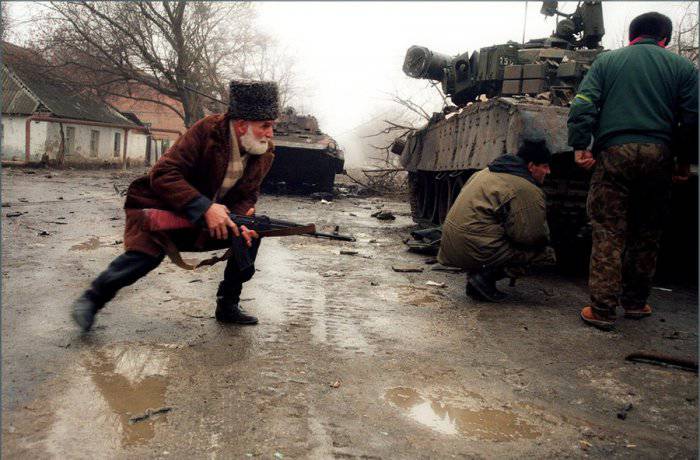 Subsequently, on the streets of the city one could meet a large number of burnt equipment with a white square in a circle, marked 205 by a motorized rifle brigade, which ultimately played a decisive role in breaking through to the surrounded. But even these deblocking operations cannot be attributed to the storming of the city, their main goal was only to create corridors that would connect the surrounded to military bases on the outskirts of the city. Only on 6-th day of battles, 11 August 1996, one of the columns from the 205 motorized rifle brigade was able to get into the central part of the city to the complex of government buildings, as a result of which the wounded, journalists and corpses of dead servicemen were taken out.

The situation was significantly corrected only by 13 in August, when the federal forces managed to unlock most of the surrounded objects, only 5 checkpoints were not unblocked. The bold and at the same time adventurous operation "Jihad", prepared by Aslan Maskhadov, was close to failure. Militants themselves had serious losses and were trapped in the city. A group of 58 army units gradually increased around Grozny. However, they did not receive the order to conduct the final operation to eliminate the militants that had broken into the city. Frustrated by the failures and the current critical situation at the initial stage of the assault, many times intensified in the media, the Russian leadership decided to negotiate with the militants who were instructed to lead General Alexander Lebed. 31 August negotiation process ended with the signing of the Khasavyurt agreements. The first Chechen war came to an end, the Russian troops left the republic, until the beginning of the 2 campaign of the Chechen 3 year remained.

As a result of the fighting in Grozny from August 6 to 22, federal forces lost 2083 people (494 killed, 1407 wounded, 182 missing). On the streets of the city were burned 18 tanks, 61 infantry fighting vehicles, 8 armored personnel carriers, 23 vehicles, 3 helicopters were lost. It’s quite difficult to name the exact losses of the militants. According to the publication "Soldier of Fortune", the losses of the militants exceeded the Russian ones by 2-3 times, the official publication of the Ministry of Defense of Russia, the newspaper Krasnaya Zvezda, wrote that on some days of the assault, the losses of the militants reached 100 people killed.

Ctrl Enter
Noticed a mistake Highlight text and press. Ctrl + Enter
We are
Khasavyurt guillotine for RussiaAssault of the Terrible-2. We will sweep you away with fire
37 comments
Information
Dear reader, to leave comments on the publication, you must to register.