Kyrgyzstan and Tajikistan: Notes from the Fergana hotbed of tension 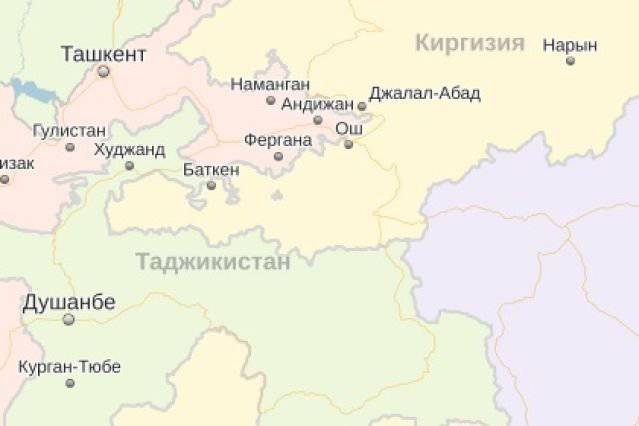 People in protective form are on duty on opposite sides of a small bridge in the gorge: on the higher side in the apricot garden are located the Kyrgyz special forces and border guards; less than 15 meters away, a squad of Tajiks is looking through binoculars in uniform and unmarked with Kalashnikov assault rifles.

It is a bridge at the main water intake node at the conduit, through which water is supplied to downstream residential areas of Kyrgyzstan and Tajikistan. The water intake itself is located in a disputed territory, which, despite the innumerable official meetings, has not been delimited since the collapse of the USSR in the 1991 year. This is an area where tension has reigned for a long time, and since January the situation has heated even more.

On a site located above the bridge, behind Kyrgyz tents and barriers of sandbags, behind piles of car tires, which servicemen burn at night to keep warm, bulldozers and concrete mixers froze. They built a new bypass road, which, a little closer in the past year to the main water intake and entering the disputed territory, exacerbated tensions at the border, threatening to destroy the fragile status quo. The new road would allow Kyrgyzstan to no longer use the existing common for two states route; in Tajikistan, they fear that this will push Kyrgyzstan to obstruct movement on this very common road, which may cut off the settlement in which about 30 thousands of Tajiks live.

On January 11, an exchange of fire took place on the main water intake area. By most evidence, this was the fiercest border clash between two generally peaceful neighbors. Both sides claim that the opposing side has started shooting first. At least eight people were injured in the shootout. According to Kyrgyzstan, Tajikistan then used mortars and grenade launchers. The confrontation has been lasting for the third month, and so far there is little to say that tensions may soon discharge.

For many generations, Kyrgyz and Tajiks have lived together in this disputed territory. Today, their houses are “staggered” - there is no clear boundary, and citizenship coincides with nationality. As the population grows and water resources decrease in the surrounding valleys, militarization at the border increases and the possibility of violence increases. On-site decisions are made to the teeth by armed 18-year-old draftees, who are barely able to talk to each other: the majority speak only a little Russian who once served as the language of interethnic communication. These people get less than 6 dollars a month - that on one side of the border, that on the other.

“Ten years ago we talked with our Kyrgyz friends, played football together, went to visit each other. None of this anymore. Only this morning we were standing here, then Kyrgyz border guards came, cursed us and said that we have no right to be here, ”says 28-year-old Tajik Abdujalil Abdurahimov, who lives in a mixed-type village, which he calls Somoniyon, and Kyrgyz - Kok -Tash. The settlement is a group of fenced houses without central water supply and electricity supplied in a limited order, located in the downstream of the main water intake. “How much longer can we put up with this?” He adds, to the cheers of those gathered around the young Tajiks.

Both Kyrgyz and Tajiks complain of oppression by the border guards of the opposing side, as well as the fact that residents of the opposite nationality throw stones at their cars, and the young people start fights. Every year the situation is getting more and more aggravated, and every year more and more residents begin to believe that the solution is to establish a clear boundary. According to Abdujalil Abdurakhimov, who, like many young people in the village, goes to Russia to earn money every year (many apricot dealers in Moscow come from these places), one of the problems lies in the rapidly growing population. According to his calculations, 10 years ago five families lived in Somonyon (Kok-Tash), today their 150.

In the upper reaches of the village of Somoniyon (Kok-Tash) and the main water intake, the two countries are connected by a common road leading to the Kyrgyz village and the Tajik city. In the old days, this interdependence promoted peaceful interaction. Today the road is patrolled by servicemen of both sides. And this, it seems, is only just heating up the tension. When a car breaks down in a disputed territory or local Tajik residents climb onto a pole to fix a road sign that has faded so much that accidents have become more frequent at a dangerous turn, an excited crowd gathers around. Even the most insignificant dispute, which could have been easily resolved elsewhere, can immediately turn people against each other.

“I would not say that we were friends, but we communicated. Now, after the [January] conflict, complete zero. We do not even sell more groceries, - says 62-year-old Kyrgyz resident of the village Ak-Sai Turat Ahmedov. - The problem is that they want us to travel through their territory, so that we depend on them. They don't let us build our own road. ”

The bypass road, which Kyrgyzstan is building with the financial assistance of China through the hands of Chinese workers, goes to Ak-Sai, skirting the common road and the controversial two-kilometer stretch of apricot orchards and rice fields. This Kyrgyz village has a strategically important position: through it passes all the transport to the Tajik exclave Vorukh with its 30-thousandth population.

Kyrgyz and Tajik peace officers stop at a concrete sign indicating entry to Vorukh to chat (they are older than young recruits, and speak Russian decently), but then an aggressive group of young people appears and law enforcement officers ask everyone to leave the gravel road, denoting the actual border. The special forces unit of the Kyrgyz Ministry of Internal Affairs is stationed in an elementary school located on one side of the street. Children play in front of the building, and behind the house special forces in the field kitchen prepare lunch.

Officials on both sides insist that they do not want to fight, sentimentally speaking about peaceful good-neighborliness for "thousands of years." But the only tangible result that the parties reached in numerous meetings after the January shootout was the decision to hold additional meetings. Kyrgyzstan insists that the issue of road construction is not negotiable.

Kyrgyzstan’s chief negotiator, Deputy Prime Minister Tokun Mamytov, admits that it’s not easy to draw a border. Since 2006, the parties have not delimited a single kilometer on the disputed section of the total border of 460 km in 971 km. Negotiations are "deadlocked" because Kyrgyzstan refers to 1950-s cards, and Tajikistan - 1920-s. The border did not matter much when both republics submitted to the Kremlin. In Soviet times, the border changed its shape, when collective farms transferred plots of land to each other, and bare channels, like the lunar landscape, ground the earth, turning it into fertile farmland.

Tokun Mamytov, who is in charge of the power unit, tells how at the talks the representatives of Tajikistan told him: “If you build this road, you will get out of our control, and we want you to be under the control of Tajikistan.” They say that we will become too independent, that we should drive around Tajik territory. ” (Having promised to answer the written questions, the office of Mamytov’s colleague on negotiations, the Deputy Prime Minister of Tajikistan, Murodali Alimardon, refused to comment on the situation).

Tokun Mamytov rejects the idea that his government will ever cut the road leading to Vorukh as a punitive measure. However, such concerns on the part of Tajiks who are surrounded are quite understandable. In the process of approaching the road construction to the village of Ak-Sai and forcing tensions over the 2013 year, local residents repeatedly after some conflict attempted to cut off the neighboring communities, both Tajik and Kyrgyz. At the moment, Kyrgyzstan has suspended work on the construction of a scandalous bypass road. This led to the temporary establishment of peace, said Colonel Erzat Shamshiyev, chief of staff of the Regional Border Management Board of the Batken region. Showing with his hand to the rock that needs to be blown up to lay the road, looking older than his years, 38-year-old Erzat Shamshiyev says: “Tension subsided because construction stopped. But when it resumes, problems may start again. ”

When asked what is more important: the road or the world, he immediately replies: “The road”. And after a pause, he adds: “If there is no new road, we will have to go on a common road and in the end the conflict will still break out”. 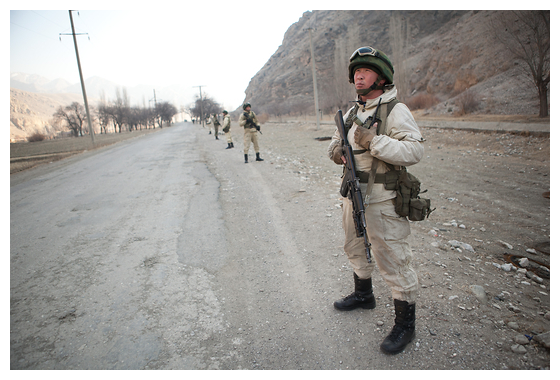 Kyrgyz border guards patrol the road in the disputed territory connecting Ak-Sai with Kyrgyzstan and Vorukh with Tajikistan. 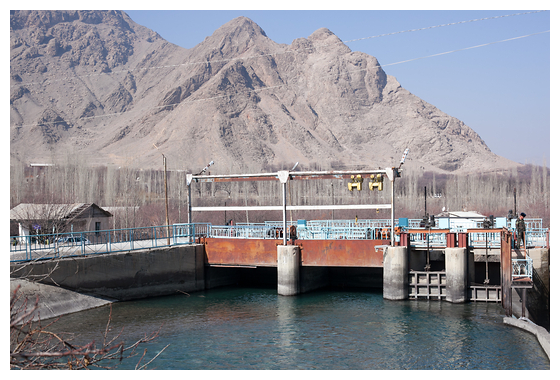 The Tajik and Kyrgyz military units are facing each other on opposite sides of the bridge. 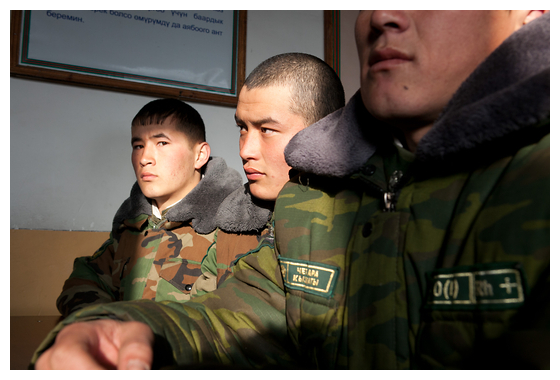 Kyrgyz conscripts are trained at the Kapchagai frontier post in Ak-Sai village. 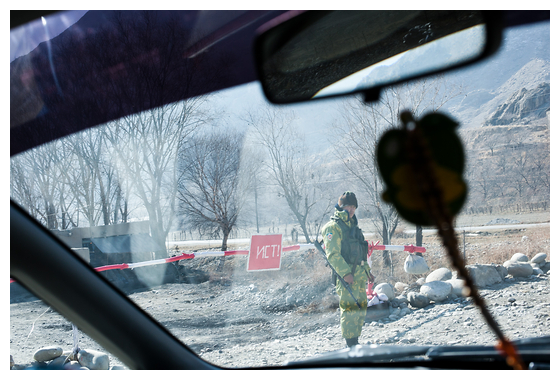 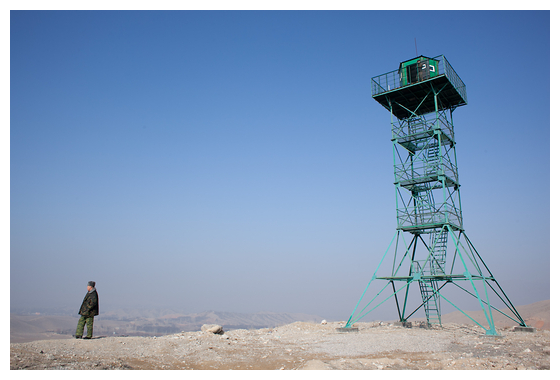 Kyrgyzstan is constructing new watch towers as part of measures to strengthen the border. 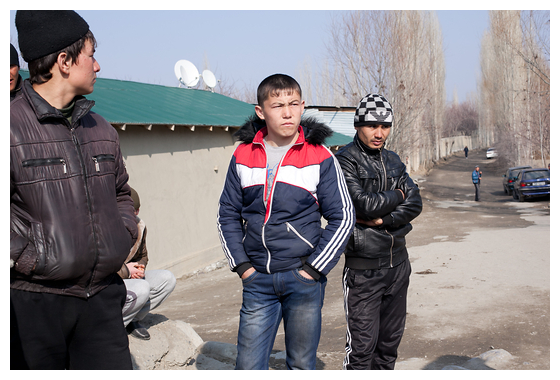 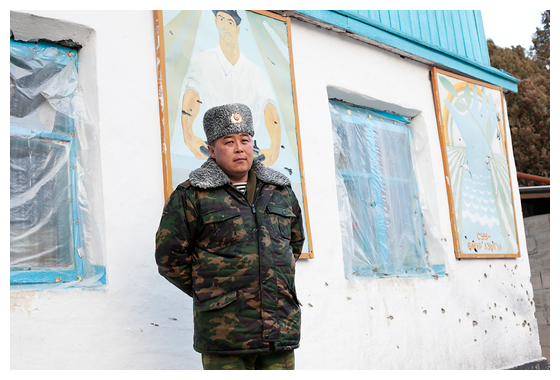 Kyrgyz Colonel Erzat Shamshiev is standing against a wall fired from Kalashnikovs during a shootout at a water intake. 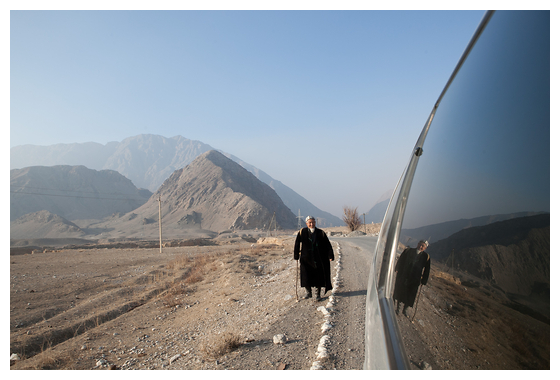 A man walks along a road that passes through a disputed territory and connects Kyrgyzstan with Tajikistan. 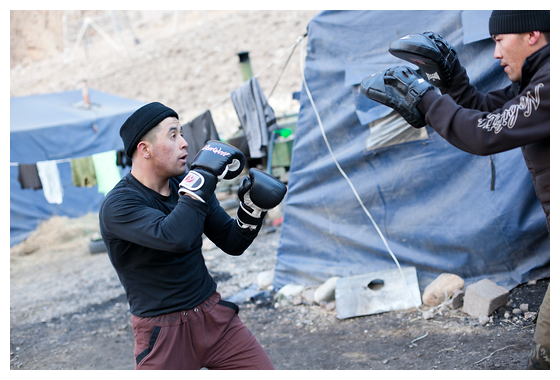 Kyrgyz border guards are trained with a squad of special forces of the Ministry of Internal Affairs at the main water intake. 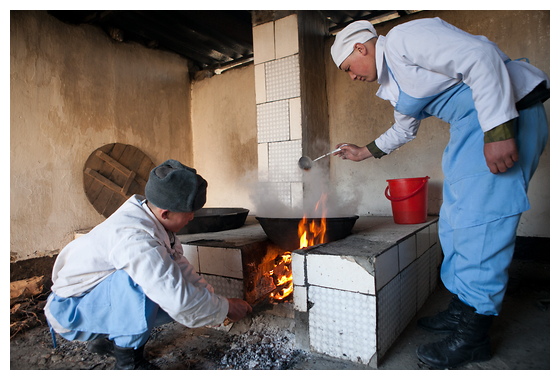 Kyrgyz conscripts prepare lunch at the Kapchagai border post in the village of Ak-Say. 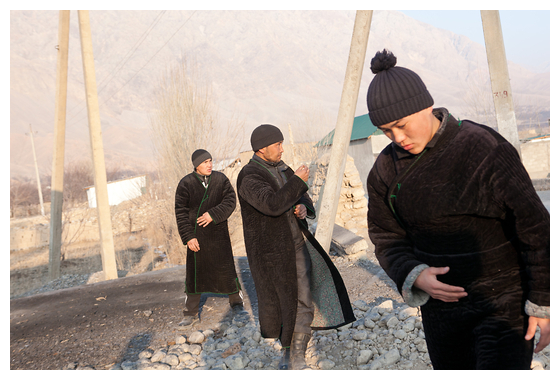 Kyrgyz people wrangle with Tajik border guards, blocking the actual passage to the territory of the Tajik exclave Vorukh. 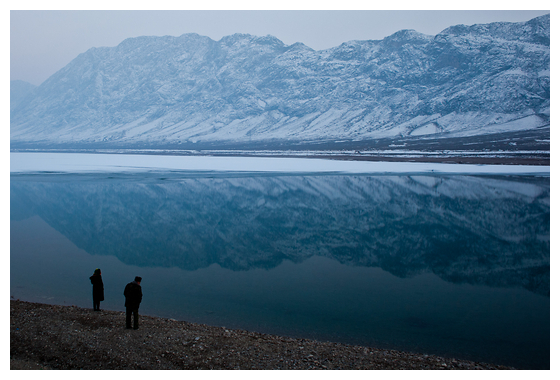 Kyrgyz border guard recruits patrolling Ak-Sai and the surrounding territory in an area disputed by the two countries. 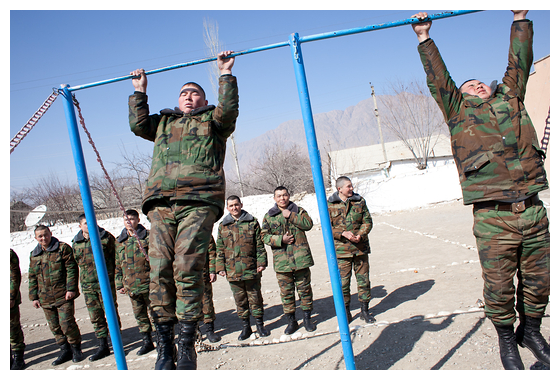 In the lower reaches of the main water intake in the territory of Kyrgyzstan is Tortkulsky reservoir. 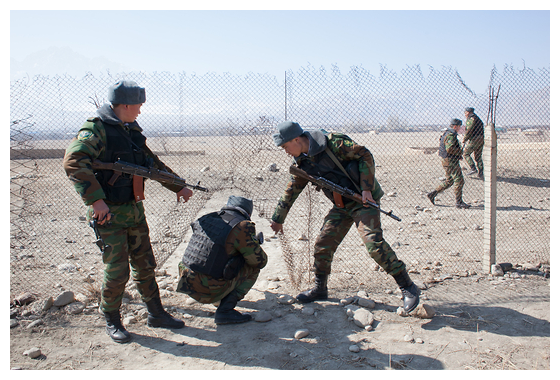 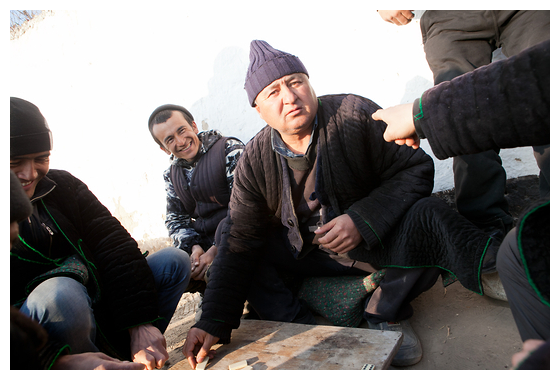 Residents of the predominantly Kyrgyz village of Ak-Sai located in the disputed territory play dominoes. 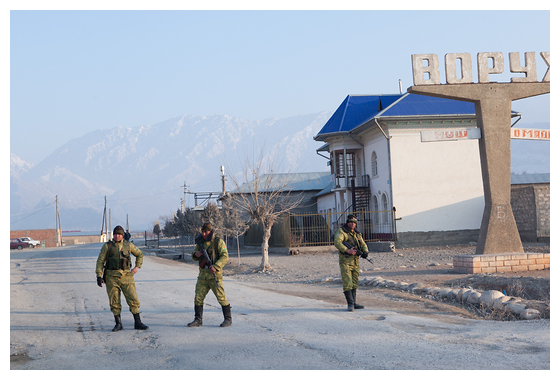 Ctrl Enter
Noticed oshЫbku Highlight text and press. Ctrl + Enter
We are
Tajikistan in the shadow of ChinaRussians of Kyrgyzstan: Is the Exodus Irreversible?
Military Reviewin Yandex News
Military Reviewin Google News
25 comments
Information
Dear reader, to leave comments on the publication, you must sign in.