March 27 2014
151
How many negative remarks to Russia from the mouth of the NATO representatives we heard from the moment Russia openly declared that it was not going to support the gentlemen who had called themselves the new Ukrainian authorities who had participated in the coup d'état in Ukraine. Only the lazy representative of the North Atlantic Alliance did not deign to make a remark to the Russian Federation about the fact that he was going to reconsider the options for cooperation with Russia until the complete cessation of all contacts.

But it was not there. Against the background of loud cries that it is necessary to break with Russia all kinds of joint relations in the military sphere and to disband the Russia-NATO Council, it suddenly turns out that the North Atlantic military bloc wants to tighten control over the military activities of Russia itself. Since February 24, eight inspections have already visited the Russian territory, all of which included officials and military experts from NATO. The logic is good - we sort of break relations, but we will control it - what if you are plotting something against us there!

Here, of course, it remains only to envy the patience and endurance of the Russian side. After all, not to prevent NATO inspections from becoming frequent at the very moment when gentlemen from NATO are already determined to build up the American missile defense system not even near Warsaw, but ten kilometers from the border with Kursk and Belgorod regions - this is truly a phenomenal restraint!

An incredible number of inspections per unit of time with the participation of German, Polish, Estonian, Latvian, Canadian, French and American military inspectors is reported by the deputy head of the Russian Defense Ministry, Anatoly Antonov.

The deputy minister of defense notes that out of eight NATO missions, seven were related to inspecting Russian regions bordering Ukraine. NATO inspectors, apparently, were full of hopes to see how hundreds of Russians stood in the immediate vicinity of the border with Ukraine tanks with roaring engines ready to rush into the territory of a neighboring state to reach Kiev, or even to Berlin ... But they didn’t see tank armadas, "hordes" of foot soldiers too. On the one hand - it seems to be a disappointment, but on the other - simple NATO happiness ...

Is it possible to imagine that at least one of the countries of the North Atlantic Alliance would allow Russian military experts to conduct two inspection missions a week on their territory? Frankly speaking, it’s extremely difficult to imagine, if only because in any attempt by Russia to ask for written guarantees that the missile defense system in Eastern Europe is not directed towards us, the West begins to fool, stating that oral guarantees are quite enough. So if oral guarantees are enough, why then pry into Russian territory, if Russia declared that it is definitely not going to conduct any military actions against the Ukrainian people! It is clear why - in order to implement the policy of containment of Russia, mentioned recently, not once, but now with the possibility of open steps across our borders. We, they say, just look here - you do not worry ...

Well, and what, actually, these inspection missions of Russia gave? Perhaps, the “world community”, having ascertained that the engines of Russian tanks do not roar at the Ukrainian borders, changed rhetoric, taking into account the interests of Russia? Maybe we really believed? Yes schazzz ...

Here is an example. After all the NATO inspections on the territory of Russia over the past month, and did not reveal any increase in the number of Russian troops at the borders with Ukraine, the NATO Secretary General Mr. Rasmussen spoke to the public and said:

The Alliance is concerned about the buildup of Russia's military presence on the border with Ukraine.

What - the results of more than half a dozen checks passed by Rasmussen? Yeah. 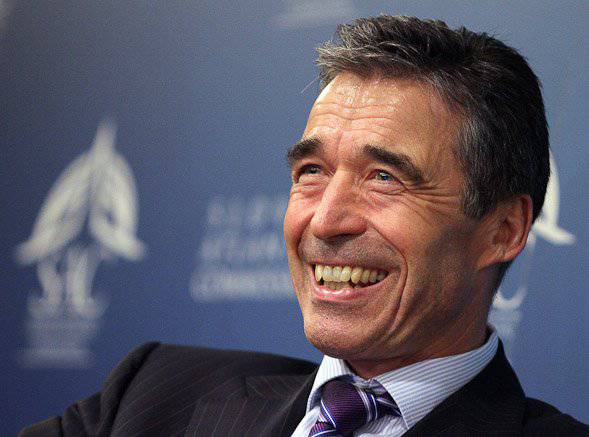 Inspections NATO officials were not needed to announce to the world that Russia was fulfilling its obligations. The reason is different - the North Atlantic Alliance reassured itself (its top), realizing that “the Russian military threat to Europe and the world” is a paranoid horror film that the Baltic authorities may be overly intimidated by their own horror stories. But at the same time, high-ranking NATO officials need to do so that the horror film does not leave the European and North American screens. For a Western viewer, Russia is simply profitable to exhibit a sort of grimy monster that sharpens a tooth for world peace every day and hinders the development of a planetary democracy. And Rasmussen, without voicing a single conclusion of the inspection commissions, stubbornly forces the western inhabitants to believe that Russia is aggravating the situation on the borders ... The Secretary General plays his role regularly.
This anti-Russian hysteria fueled artificially by the NATO leadership itself and, to put it mildly, the unstable situation in Ukraine makes it possible for NATO dwarfs to solve their own tasks within the framework of the alliance. In particular, the Baltic republics requested additional assistance in patrolling the sky over Estonia, Latvia, and Lithuania, citing this “increased threat” in connection with the Ukrainian events. From whom exactly such a threat emanates, in the opinion of the Baltic authorities, we guess ourselves.

Romanian Minister of Defense Mircea Soul called on the leadership of the alliance to pay attention to the military capabilities of NATO at the borders with Ukraine in order to quote: "carry out operational activities in the region."

For the "implementation of operational activities" directly Romania, as it turned out, a lot is not needed - "just something" 48 F-16 fighter jets. That is the number mentioned by a person with a spiritual name. At the same time, the Soul recalled that Romania is doing everything to implement the installation of components of Eastern European missile defense on its territory. Well, we remember - as a counterbalance to Iran ... That is, the rhetoric of the Romanian minister is something like this: do not forget that we are hosting your missile defense system - then throw yourself on the fighters ...

Yes, and the new Ukrainian authorities of NATO are ready to play along. On Wednesday, the so-called Parliament Speaker and, in addition, Ukraine’s Acting President Oleksandr Turchynov, suggested that deputies allow the presence of foreign forces on Ukrainian territory. While we are talking about conducting exercises together with the United States, Romania and Poland. Well, today, more than ever, Turchinov needs to go out of his way to please the henchmen, otherwise they will not share a piece from the master's table. And for three crusts of bread and warm chairs, the new “power” of the Square can accommodate foreign aircraft even in their own bedchairs ...

Ctrl Enter
Noticed oshЫbku Highlight text and press. Ctrl + Enter
We are
Situational analysis of the death of the MH17 flight (Malaysian Boeing 777), made on the basis of engineering analysis from 15.08.2014Results of the week. “In our cooperative, the board is always agreed”
Military Reviewin Yandex News
Military Reviewin Google News
151 comment
Information
Dear reader, to leave comments on the publication, you must sign in.