The treasury will pay for the soldier 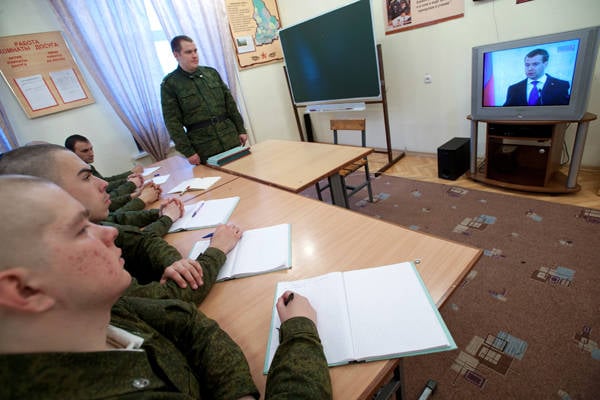 This financial practice is provided for by the new law on education. Article 71 of the document states that citizens who have completed military service by conscription and have the appropriate recommendation of commanders have the right to study for state accounts at the preparatory departments of federal state universities. What form it should be in military units can be found in the order of the Minister of Defense N 633. It also lists the procedure for issuing servicemen of this educational application. And also lists the conditions for refusal to provide it.


With the form of the military is not particularly wise. Four paragraphs of the printed text of the recommendation are free to fit on a standard sheet of paper. There it is only necessary to enter the surname, name and patronymic of the soldier, his date of birth and the period of his service. Below - the signature of the commander and the seal of the military unit. So that the draftees do not have the temptation to "draw" this document independently, by order of the Minister of Defense, they will make an entry in the military ID of the fired person to issue an educational recommendation to him. It will appear in the column "Special Notes", will be certified by the chief of staff of the military unit and provided with a seal. Well, the demob itself will receive the recommendation along with other documents before sending it home. We advise future students to keep this paper very carefully - the second time no one will issue it.

Now about the refusal to issue a recommendation. Depriving her of a soldier on the grounds that he simply does not like the commander will not work. For such a decision, the officer must have good reasons. For example, a commander has the right not to issue a petition to a subordinate who, during his service, was brought to administrative or criminal responsibility for any offenses or had a disciplinary action taken at the time of his discharge from the army. To reprimand a demobee reprimand, in general, is simpler than simple - there is always a reason. Therefore, recruits who hope with the help of the state to transfer from the soldiers' stool to the benches of the preparatory department of the university, it is not recommended to relax much before the failure in the literal sense of the word. But private soldiers and sergeants, whose road to the army went through expelling from the university-university on discipline, preferential study at the preparatory department of the university in any case does not shine. Repeated path to higher education, they will begin on a common basis.

If we talk in general, the training of soldiers' preferences, guaranteed by law, look quite attractive. Moreover, unlike the previous benefits, they are not just declared, but work. Say, the guys who fought in the "hot spots", in universities take out of the competition. As for ordinary recruits, then with the presence of an army recommendation, they will be able to prepare for student life, without putting out from their own pocket fifty or more thousand rubles. The state will do it for them.

Ctrl Enter
Noticed oshЫbku Highlight text and press. Ctrl + Enter
We are
The result of reforming the monetary allowance of military personnel in 2012 yearBehind the credit card march!
Military Reviewin Yandex News
Military Reviewin Google News
23 comments
Information
Dear reader, to leave comments on the publication, you must sign in.