"Will settle in private collections"

March 26 2014
35
On Tuesday, Director-General of the State Hermitage Museum Mikhail Piotrovsky expressed concern about the fate of the collection of Scythian gold from Kerch museums, which is on display in Europe. He recalled that the collection was taken out of Kerch before the reunification of Crimea with Russia, and now the question arises, "where will this collection return after the end of the exhibition: to the Crimea, to Ukraine or remain in Europe."


The Amsterdam Museum is currently hosting the exhibition Crimea: Gold and the Secrets of the Black Sea. Among the exhibits there is also a collection of the Scythian Gold Central Museum of Tavrida. At the same time, sources in the Ministry of Culture of Ukraine, citing the leadership of the Amsterdam Museum, reported that the collection would be returned to Ukraine, and not to the Crimea. 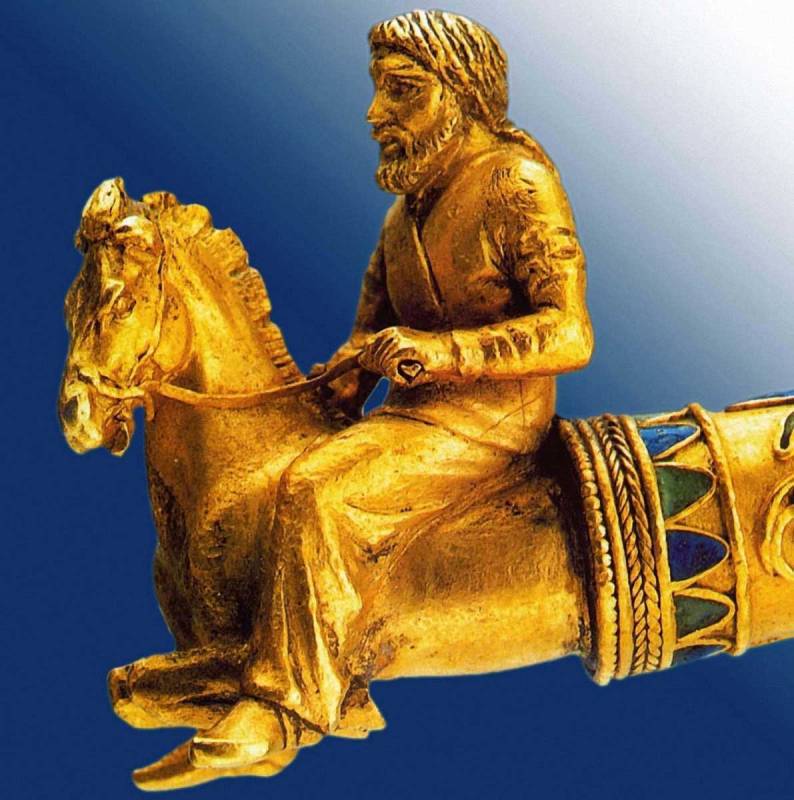 “The Crimean museums brought to Amsterdam their best masterpieces of the Scythian period, a lot of Crimean rarities and artifacts, including a lot of gold jewelry. In May, the exhibition should be already finished, and the exhibits returned to the museums. However, the leadership of the Amsterdam Museum has already loudly stated that since the Netherlands did not recognize the independent, or especially the Russian Crimea, all the exhibits will be transferred to the Ministry of Culture in Kiev, ”writes“ Press of Ukraine ”.

The Hermitage did not participate in the organization of this exhibition, but it attaches great importance to the archaeological heritage of Crimea. Its specialists are constantly participating in scientific expeditions on the peninsula, working on excavations. The Hermitage also has its own unique collection of Scythian gold.

At the same time, Piotrovsky claims that the exhibition of Scythian gold, which was transported from Europe to the Kerch Museum in the Crimea, disappeared without a trace. “The most recent problem related to the Crimea is the exhibition of Scythian gold from Kerch. She left Europe back to Ukraine, but we still do not know where she is, ”the museum director said, stating that the Hermitage maintains close relations with Kerch museums.

According to unconfirmed information, the Ukrainian authorities could take Scythian gold to the West as collateral for loans. Piotrovsky also noted that the Hermitage has no information on where these exhibits will be stored in Ukraine or in the Crimea.

That the Ukrainian ministry is ready to accept the collections of the Crimean museums, the head of department Yevgeny Nishchuk made it clear. In particular, exhibits from the Crimean reserve "Chersonese of Tauride" after the exhibition in Amsterdam were in Kiev. “Those museum exhibits that were taken to exhibitions in other countries, as a rule, should be returned to the site by law. But we have signals, because of which we made a resolution from the ministry of culture to changes to the museum funds of cultural heritage in connection with these events, as an exception, so that the decision where these museum exhibits should be returned remains the right of the ministry of culture ”, Netbook

He clarified that "we are talking about museum exhibits from the reserve" Chersonese of Tauride, "which are now in Amsterdam." “There are signals that the Hermitage is requesting that they return there. Accordingly, we must check this, and this resolution will allow us to make a decision as a moment of shutdown, so that after the exhibition ends, if the situation is not changed, we decide where they will return, ”the official said.

Doctor of Arts, Deputy Director of the Institute of Cultural and Natural Heritage Oleksiy Lebedev notes that the exhibition "Crimea: Gold and Secrets of the Black Sea" was formed from the collections of six museums: the National Historical Museum of Ukraine, the Museum historical treasures (Kiev), Bakhchisarai and Kerch museum-reserves, national reserve "Chersonese Tauric", as well as the Central Museum of Taurida (Simferopol). Four of them are Crimean museums. “According to the plan, this exhibition should work in Holland until September this year. So far nothing extraordinary has happened, ”Lebedev told the VZGLYAD newspaper.

However, he noted that earlier in the blogosphere there was information that the director of the Amsterdam Museum intends to transfer all the items from the exhibition to the Ministry of Culture of Ukraine, and not to specific museums. “The Internet community automatically had the idea that the Ministry of Culture of Ukraine will not return the exhibits to the museums of Crimea. But I have not heard of such statements. Secondly, the question arises, and to whom should the Dutch in general return the exhibits? It depends on who the contract was signed with. There are situations when contracts are signed by museums, and sometimes by the ministry of culture. If the contract was signed with the ministry, then the Dutch are obliged to return everything to him. And there is nothing unexpected in this, ”the expert explained.

As for precedents, Lebedev recalled the unwritten international rule, which consists in the fact that works of art, historical and cultural monuments should not become victims of war and political conflicts. In 1945, he recalled, Soviet troops exported the values ​​of the Dresden Gallery to the USSR. The collection was later returned to the same museum.

“The collection was taken from united Germany, and returned to the GDR, to another country! That is the main principle - the exhibits should be returned to the collection, its integrity can not be destroyed. This is due to the concern of M. B. Piotrovsky. Because the collection itself is a monument of history and culture. The principle is this: out of six museums they took it at six and should return, ”explained Lebedev.

In turn, the first deputy chairman of the Duma Foreign Affairs Committee, Leonid Kalashnikov (KPRF), considers the threat that unique collections will not return to the Crimea real. “Surely the agreement was concluded not by the Ministry of Culture of Crimea, but by the Ministry of Culture of Ukraine. In this case, there will be very serious problems. If the contracts were concluded by the regional ministry’s office in Crimea, then the situation is different, ”Kalashnikov told the VIEW newspaper.

At the same time, he says that from a political point of view, the collection should return to the Crimea. “Russia has recently returned to the Austrians exhibits from the collection of the princes Esterhazy, taken out during repatriation. And then there was the Austro-Hungarian Republic. If you dig into this conflict, it will be very difficult to solve. Most likely, common sense will prevail here, ”hopes Kalashnikov.

However, a member of the Duma Committee on Culture, Alexander Balberov (LDPR), adheres to the version that the Ukrainian authorities brought gold Scythians to the West as collateral for loans, so the collections will not return to Russia anymore. “Yatsenyuk (Prime Minister Arseniy Yatsenyuk) exported these items on account of the fact that the country will receive any tranches that Europe and America promise to Ukraine. Exhibits will not return neither to Ukraine, nor to Russia. They will either settle in private collections, or they will be some kind of pledge for the future, ”Balberov told the LOOK to the newspaper.

He also added that there is no exact information about where Scythian gold can be. “I have data that it is in the United States, because these values ​​were exported just at that time period when Yatsenyuk flew to Obama. Therefore, it is necessary to understand, in whose hands is this gold. After that, you need an understanding of why this export was made. Obviously not in order to preserve these values ​​as national wealth. Based on the facts that will become known, it will be necessary to take action, because such objects and values ​​do not belong to someone alone. This is a world heritage, ”said the deputy.

As for the version concerning the export of Scythian gold by Yatseniuk, then, as the Ukrainian press wrote, citing sources in the power structures of Ukraine, it was 7 March. Then at two in the morning an unregistered transport plane flew from Boryspil airport to the USA. Before that, four collector cars and two Volkswagen cargo minibuses arrived at the airport. All cars were without license plates.

More than 10 people in black uniforms, masks and body armor came out of the cars. Some of them were armed with machine guns. They quickly loaded into the plane more than 40 boxes, after which the cars left the runway, and the plane took off on an emergency basis.