March 26 2014
31
The Swiss company introduced its new product to the market - the bulletproof Diamond Armor (Diamond Armor) suit. True, this suit will find its place only in the wardrobe of the richest businessmen of our time. This is not surprising, because this costume will cost the owner a tidy sum - 3,2 million dollars. If you are looking for something for your everyday wardrobe that would suitably look among your everyday clothes and at the same time bulletproof, the costume of the Swiss company SuitArt is what you need.


It is also suitable for all those who for some reason did not fit the “budget” version of a bulletproof business suit proposed by the atelier from Toronto, but we will talk about the “budget” suit in the second part of our article. In the meantime, focus on the model Diamond Armor. The cost of a million dollar 3,2 suit automatically turned it into the world's most expensive bullet-proof suit. The suit, which, according to the developers, can withstand a shot from an 9-mm pistol, without losing elegance, and can be sewn to the nearest millimeter according to your figure.

The Diamond Armor business suit is bulletproof, ventilated, water repellent and custom tailored. Given the set of listed characteristics, it is not surprising that this men's suit is a joint product of cooperation of several large companies at once. For example, the bullet-proof part of Diamond Armor was developed by Croshield, a well-known manufacturer of lightweight body armor. The manufacturer guarantees the quality of its products and notes that the suit fully complies with the second level of protection according to the standards of NATO STANAG 2920 and NIJ standard 0101.0.

To protect the costume holder from more prosaic threats, like rain on an overcast autumn day, nanotechnologies, created by Schoeller Technologies, were implemented in Diamond Armor. The technologies created by this company imitate the structure of the surface and the behavior of plants to protect themselves from water and dirt, which makes the business suit not only bulletproof, but also moisture and dirt repellent. A similar technology is used to seal the seams of the suit against possible leaks.

All protective layers implemented in a suit make it too warm and not the most comfortable for everyday wear, but the manufacturer has taken care of this, having provided a special conditioning layer in the suit. By pressing a special button, the owner of "diamond armor" can easily put into operation an active cooling system built into the suit, which starts a mini-fan blowing air through a special ventilation layer filled with water. The active cooling system was developed by the specialists of the Swiss company UNICO Swiss Tex GmbH.

In this case, the suit is not in vain called diamond armor. To add extra chic, this modern diamond armor was encrusted with 600 black diamonds, each with a diameter of 4 mm. The total weight of diamonds on a business suit is 140 carat. Diamonds adorn the lapels of the suit and its buttons. In addition to this, each button of the costume was made of steel, from which precious Swiss watches are usually made. Buttons are also encrusted with diamonds (total 280 pieces). If this seems insufficient to you for a suit worth 3,2 million dollars, then in addition to it you can order a tie in which ordinary silk threads adjoin to pure gold threads. You can also order a Swiss watch Carl F. Bucherer, for the production of which titanium, gold and ceramics are used. 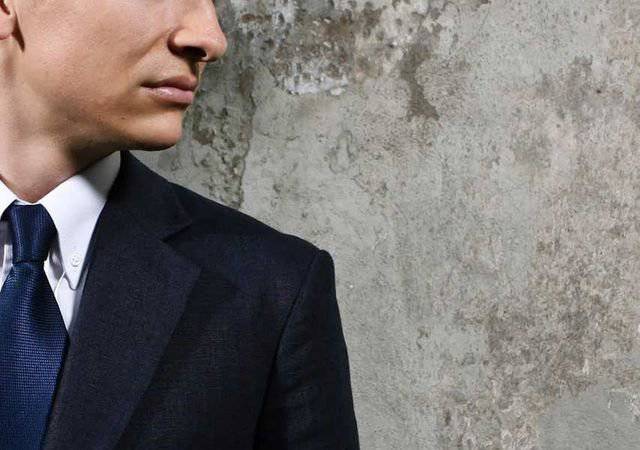 It is worth noting that this is not the first attempt to give a wealthy people a bulletproof suit in which it would be possible to appear in secular society. In 2013, employees of a Canadian atelier from Toronto presented to the public their own development of a bulletproof suit. Remarkable is the fact that the very director of the studio Michael Nguyen fell to test the costume. He literally in his own skin had to feel all the charm of being protected from a shot from an 9-mm pistol and shots inflicted by a hunting knife. By the way, he passed this test without getting a single scratch.

Note that a variety of bullet-proof clothing has been around for quite some time, but, as a rule, it looks too brutal and has a high weight. At the same time, the majority of people who are really interested in using such protection cannot afford to appear, for example, at a public speech or at a reception, in a bulletproof vest.

The Canadian bulletproof business suit in the lining structure contains a number of sheets made of carbon nanotubes. These sheets were produced by the same company that produces equipment and armor for American special forces. These sheets are more flexible and thinner than Kevlar (modern material, which is X times more durable than steel) and at the same time their weight is less than 5. The protection of the costume is constructed in such a way that it is able to intertwine in the right place, where a point strike was struck. Thus, these sheets are able to prevent the penetration of the bullet or knife of the attacker into the fabric. 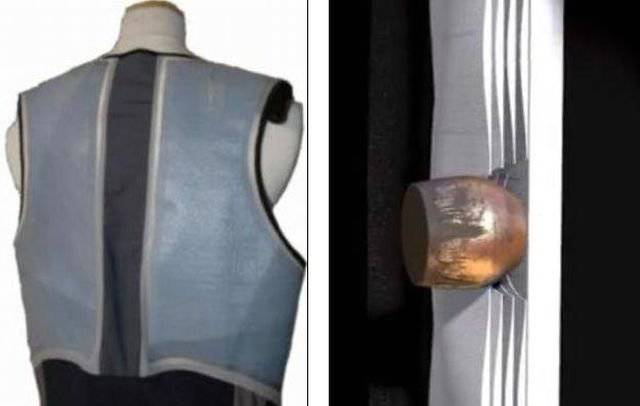 Preliminary testing of such a suit showed that it is able to withstand the hit of a 45 ACP bullet (11,43 × 23 mm), which is used in the famous Colt M1911 pistol. This result ensures compliance with the level of protection "2", which is used in the classification of the American National Standards Institute. In this case, the official certification of the Canadian costume has not been reported. Compared to its Swiss counterpart, this costume can rightly be called a “budget” one. Its estimated market value is approximately 20 thousand dollars. Of course, no one will ever sweep such costumes from store shelves, but they will definitely find their clients among wealthy citizens who are often involved in a very risky business.

Ctrl Enter
Noticed oshЫbku Highlight text and press. Ctrl + Enter
We are
For the first time in Toronto, a charity rally "I remember, I'm proud"Results of the week. “When a lot of people look stupid, it starts to look normal.”
Military Reviewin Yandex News
Military Reviewin Google News
31 comment
Information
Dear reader, to leave comments on the publication, you must sign in.