The mission of Ukraine is to rush under the EU and blow it up. 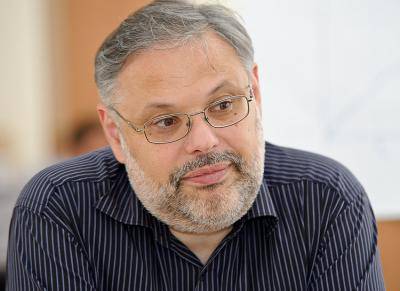 We have been discussing events in Ukraine for a month now, but one aspect has not yet been touched upon. Namely: who benefits from the continuation of the chaos that is now in place in this country. Of course, I cannot give more or less complete analysis, but why not speculate?


For a start - the European Union. Theoretically, he should not be interested in the chaos in Ukraine, since it is a border state for him. But he is incredibly interested in making Ukraine his market, that is, to destroy Ukraine’s ties with the Customs Union. This circumstance prompted the EU’s desire to sign an association agreement with Ukraine, the main point of which in politics is for the Ukrainian authorities to make no decisions without coordination with Brussels, and in the economy for the Ukrainian markets to be fully open for EU goods, and without competition . The EU’s misfortune is only in one thing: it does not control either the current Kiev “power” or the militants. Both those and others are controlled by Washington.

But Washington has more difficult problems. The fact is that for the United States the main task is to get markets for their products - so long as domestic demand falls. The most interesting potential market is the European Union, but it is tightly closed by non-tariff barriers, the dog ate it. In order to remove these barriers, the United States initiated negotiations on the creation of the North Atlantic free trade zone (as Obama announced at the previous G8 meeting), but immediately received in response history with Snowden, who hit hard at these talks.

Actually, such a zone is terribly unprofitable for the national governments of the basic EU countries. Production in the EU, where higher than in the United States, taxes and social burden on business is less profitable, which means that if such a zone is created, Western Europe will face the same deindustrialization that it itself has organized in the Baltic States and Eastern Europe. That is - an economic catastrophe is almost inevitable, with all the attendant problems for the political elites of the EU countries. I will note here the fundamental difference in the political interests of Brussels and, say, Berlin: the first is firmly within the interests of the United States, while the German leadership is trying not only to reduce the similar dependence, but also to shift the center of gravity of decision-making within the EU from Brussels to Berlin.

It is for this reason that Snowden’s revelations and other anti-democratic actions by the US leadership are constantly discussed in the EU press. And the main blow to the ideas of the North Atlantic free trade zone is delivered by constant analytical texts about the economic future of the European Union - because a sober analysis of the situation does not give any reason to continue negotiations on an FTA.

Negotiations on the FTA are going on "not shaky or shaky," in this situation the United States should use an alternative plan. If it fails to use the potential of the EU to open its markets for American goods, then you need to do the opposite - get the markets of individual EU countries, bypassing Brussels. Or - to destroy the structure of the EU in order to take control of some of its markets, since individual countries in Western and Eastern Europe will not be able to resist US activity without having the full power of the European Union.

In the end, the destruction of the EU in its current format is almost inevitable, further consolidation of Western Europe around Germany is also inevitable, isn’t it better to conduct this operation under the control of the US, rather than the continental elites of Europe? But to accelerate the collapse of the EU, which is inevitable for purely economic reasons, we need some political “trigger”. Which Ukraine can make.

I repeat once again: the current "authorities" in Kiev are completely under the control of the United States. And all their actions with the relevant representatives of the United States agreed. And these actions, frankly, are not quite adequate. You can, of course, refer to the catastrophic situation of the Ukrainian economy, but in fact even this does not necessarily require the continuation of a clearly unsuccessful policy aimed at creating a unitary and mono-national state in Ukraine. Theoretically, if the pro-Western authorities of Ukraine had 15 more years, this project could have been a success, but now ... Now there is no chance of that. Hence, the policy needs to be changed - and this is not done. Why?

Most likely, the fact is that US representatives are well aware that the continuation of the old policy will lead to a sharp aggravation of the situation not only in Ukraine, but also in neighboring countries (Poland, Slovakia, Hungary, Romania), and Brussels itself will not be able to sit arms. This is an extremely dangerous situation for the entire European Union, which cannot but cause a sharp aggravation of the situation, including the economic one. That is, to provide the very collapse of the EU, which today is beneficial to the United States.

Of course, they will not be able to capture all the EU markets. Part of it will be captured by Germany, and part by China (although it is clearly late with the project of the “New Great Silk Road”). Most likely, a civil war will begin in the Balkans, as, indeed, on the western borders of Ukraine. Actually, the United States itself doesn’t give a damn about it; the main task for them is to get the markets of more or less rich countries of Western Europe (Spain, France, Italy, perhaps Poland).

Someone may say that this is an unnecessarily harsh scenario. I do not insist, since there are still a lot of players - for example, the already mentioned European continental elites, who for the sake of getting rid of the yoke of the United States may agree to some temporary destabilization, especially since it will greatly improve their relations with Russia. There is also China, which has its own interests in the territory of the current European Union. There is a separate United Kingdom, which, of course, is not the one that 100 years ago, but still can quite have its say, especially in financial terms. Nevertheless, it seems to me that the mentioned scenario is the main one, everything else is just fluctuations against its background.

At the same time, I purposefully do not explore specific tactical mechanisms that the US can use to achieve its goals. Since we don’t have enough information, in general, there is no understanding of the mindsets of people living in Ukraine. In any case, my conversations with various insiders show that all the banal arguments that can be read in the media have little relation to reality. I will note only one circumstance: in the EU there are quite a few people who have already passed through the “hot spots” in Libya, Syria, Iraq and so on, who have EU citizenship and who may well begin concentration in the current “anarchist” Kiev. And the suppression of the Russian population of the South and East of Ukraine is not very interesting for them. But the movement to the West ...

In general, tactics are a matter of specialists, and geopolitical interests are more large-scale processes, it is more difficult to disguise them. Therefore, in conclusion, I can only say one thing: I have a clear feeling that it is Ukraine who is trying to use Ukraine today for the “explosion” of the European Union. Of course, this does not correspond to the interests of the country, but who in Washington is interested in what is good for Ukraine?

Ctrl Enter
Noticed oshЫbku Highlight text and press. Ctrl + Enter
We are
Way out of chaosHow can Russia survive and win in the 21st century?
Military Reviewin Yandex News
Military Reviewin Google News
64 comments
Information
Dear reader, to leave comments on the publication, you must sign in.