Zhirinovsky in the play "Vice for the EU"

March 26 2014
120
It became known during the week that after a speech from the Duma rostrum by the leader of the Liberal Democratic Party of Russia Vladimir Zhirinovsky (March 18 this year) with a proposal to restore historical justice and return not only to Russia the territory of the east and south of Ukraine, but also to Poland, Hungary, Romania, the territory of the Ukrainian West, the LDPR sent letters to the foreign affairs agencies of the mentioned EU countries. 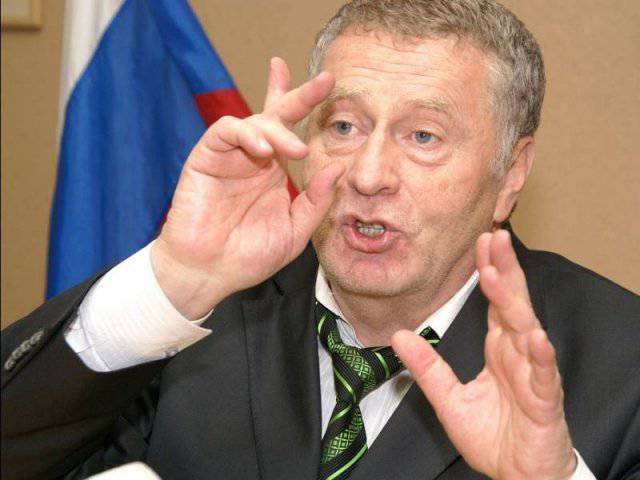 Zhirinovsky: I think the time has come not only to return the Russian lands under the Russian flag, which is natural, but also the western lands of Ukraine - they were correctly attached to the Soviet Union during the Stalinist regime to stop the German armies away ... to return to Poland, Hungary and Romania.

In his letters, Vladimir Volfovich calls for a referendum to be organized in the western regions of Ukraine in order to learn about the opinions of the peoples on the possible transition of these territories under the jurisdiction of Warsaw, Budapest and Bucharest.

Letters in the ministries were received, and the first reaction that they demonstrated there - they waved their hands in horror - they say, no, no, no, there can be no referendums. They say that Ukraine is our road only in its current borders. We, they say, are against the next “Molotov-Ribbentrop Pacts”. And all in the same spirit.

At first it’s about the reaction, and only then it’s worthwhile to speculate on the actual statements and proposals of the LDPR leader.

Advisor to the Polish President on Humanitarian Cooperation, Mr. Nalench:

Only a sick mind could think of such a thing. This letter must be sent to a psychiatrist.

Nalench said that he considered such an appeal to the Polish Foreign Ministry outrageous, but immediately added an interesting comment:

We are a European nation, although a few crazy ones can still appear ...

The official representative of the press service of the Ministry of Foreign Affairs of Hungary Gabor Kaleta:

The proposals of the Russian politician Vladimir Zhirinovsky on the division of the territory of Ukraine are absurd. This idea is so absurd that the official Budapest does not even react to it.

The official representative of the Ministry of Foreign Affairs of Romania:

The letter was received at our embassy in Moscow. This is an absurd sentence that does not need comments.

The overall result seems to be this: absurd, abnormal, psychiatry ...

On this basis, it is safe to say that in the West (even if this “West” is Eastern Europe), the leader of the Russian Liberal Democrats is clearly underestimated ... For the sake of justice, I must say that Vladimir Wolfovich is also underestimated in Russia, believing that his statements - truly a clinical case, which is hardly worth responding seriously. But one thing is when Zhirinovsky is going to “distribute each Russian woman by a man” and “cancel the letter Y”, which is not pronounced by the younger generations of the large Zhirinovsky family, and it is quite another when it comes to global geopolitics.

Initially, the words of Zhirinovsky really seem to be some kind of heresy, but the permanent leader of the Liberal Democratic Party seems to understand perfectly what he is saying (well, or he understands what he is broadcasting). And "says" and "translates" - the essence of different things.

One of his proposals to hold referendums in the western regions of Ukraine Wolfych (sorry for some kind of familiarity) takes the political elite of Poland, Romania, and Hungary for a soft spot, both individually and taken together. The thing is that over the past seven decades and more, in these Eastern European countries, public groups have been formed that were united in their desire to return the territories, which, as a result of certain events, became part of the Ukrainian Soviet Socialist Republic. For decades, these social groups have expanded, quite actively denoting their point of view. The rhetoric that in the future their countries must necessarily reunite with the so-called eastern territories that had been annexed by the Soviet Union, which became part of the USSR, gradually penetrated into the power elites, adding to the right-wing and center-right parties additional percentages in elections at different levels.

The confusion and vacillation in Ukraine, which was replaced by a coup d'état and attempts to revise the language issue in this country, led to the very right-wing parties in a number of Eastern European states appealing to the newly-formed Ukrainian authorities to provide full autonomy to the western regions of Ukraine. With such a call to the current Kiev made, the Hungarian ultranationalist party "Jobbik" in conjunction with the Polish ultra-right movement "Ruch Narodowy" (its official website, by the way, is blocked by Russian operators).

On the official website of the Hungarian party “Jobbik”, the referendum in the Crimea and Sevastopol is called exemplary - the triumph of self-determination of peoples. At the same time, party representatives say that Russia demonstrates how to protect its compatriots abroad, and modern-day Hungary, the quote: “Shamefully cannot do this.” It also adds that if members of the party were represented in the Hungarian government "Jobbik"then the Hungarians in Ukraine "would not be infringed upon their rights."

The political elites, which today represent the official authorities of Poland, Hungary and Romania, being bound hand and foot by Brussels and Washington, are actually forced to broadcast the rhetoric of Brussels and Washington. And this is where Vladimir Zhirinovsky appears on the scene, who says the following text: gentlemen, if in Ukraine you support the ultra-right (read: fascist) Freedom and Right Sector, then why can't you hear the words of support for the Hungarian Jobbik and Polish “Rukham”? And, gentlemen? .. If you consider the coming to power of “Svobodovtsy” in Ukraine to be legitimate, then support the aspirations of the Polish, Romanian and Hungarian parties of the corresponding sense in their desire to give regions with considerable ethnic Poles, Hungarians, Romanians autonomy. Of course, only by referendum ...

This is where Zhirinovsky’s geopolitical clutches manifest themselves. If official Warsaw, Budapest and Bucharest continue to declare that the referendum in the western part of Ukraine is bullshit, then this will mean a) the actual abandonment of their claims to territories lost more than seven decades ago, i.e. rejection of programs implemented, including through the issuance of passports of citizens of Poland and Hungary in the adjacent territories of Ukraine, b) a surge of interest of ordinary Poles, Hungarians and Romanians to nationalist parties, which are very strong in these states (especially in Poland and Hungary) and are active, and who will be able to play cards in the “restoration of Great Poland” or “Great Hungary” style to get seats not only in parliament, but also in the government, throwing off the current authorities. This in turn can significantly weaken the dependence of the same Warsaw and Budapest on Brussels and Washington, which simply have to distance themselves from the extreme right (as they are trying to do it in Ukraine today) and put out the fire already "in their apartment."

If the official authorities of Poland, Romania and Hungary ultimately think about the fact that there is “something in the proposal of Zhirinovsky, trying to improve their own political rating inside the country, then this will be more than a scandalous version of Eastern European policy . And Brussels will have to put out the fire again ...

So far, Zhirinovsky’s proposal, as we found out, is officially called the absurd in the above-mentioned East European troika. But it is worth returning to the remark that the adviser to the Polish president made. Here she is:

We are a European nation, although a few crazy ones can still appear ...

What does “abnormal” mean, Pan Nalech? .. And in Ukraine, aren't these abnormals today, stubbornly repeating someone's rhetoric, do you call official authorities? Does it not happen that with such hot support of Ukrainian neo-Nazis, these abnormals will turn you into abnormals (well, as in the Ukrainian scenario), while they themselves will sit in the Sejm, the government, the prosecutor’s office, the presidential administration ... So is it not time to open our eyes to what is happening in Ukraine ?!

Zhirinovsky played his role perfectly well, sowing the seeds of doubt already within the EU. Yes, he so skillfully sowed that any sprout is able to pierce the soil covered with the crust of both the European bureaucracy and the desire to follow the interests of Washington and Brussels by all means. Nice work ...

Ctrl Enter
Noticed oshЫbku Highlight text and press. Ctrl + Enter
We are
LDPR. What is more valuable for Russia: the party program or the media image of Vladimir Zhirinovsky?"The Unites"
Military Reviewin Yandex News
Military Reviewin Google News
120 comments
Information
Dear reader, to leave comments on the publication, you must sign in.