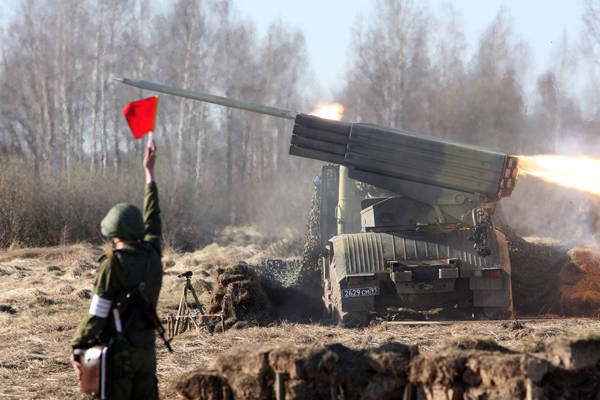 The Grad system has become famous in the world as much as its predecessor, the legendary Katyusha. And an even more sophisticated and powerful Tornado system, created by experts of the Splav NGO, under the leadership of Nikolay Makarovts, is replacing it.


For the first time, the novelty was openly shown at the Kapustin Yar 25 September 2011 site. The results of the shooting impressed. "Tornado" surpassed its predecessors in almost all indicators: range, accuracy of fire, accuracy of hit, power of the warhead and many others.

Back in the years of the Great Patriotic War, our country has become a world leader in the creation of multiple launch rocket systems. The Grad, Smerch, and Uragan systems proved to be worthy followers of the Katyusha. All were single caliber. For example, “Grad” could only shoot 122-mm projectiles, “Hurricane” - 220-mm, and “Smerch” - caliber 300-mm.

The design of the Tornado allows you to install the starting blocks of different calibers on one wheelbase. In addition, on one machine you can place containers with paired launchers for 122-mm, 220-mm and 300-mm missiles, depending on the task on the battlefield. That is, one chassis becomes a universal base for all types of jet missiles used in the Ground Forces.

The rockets themselves, by the way, are also a new generation. For the first time in the MLRS, self-guided projectiles will be used, which will make it possible to hit not only squares at a considerable distance, but specific enemy targets. In the future, an option is being considered for placement in containers that can be installed on the basis of the Tornado, operational-tactical and cruise missiles, as well as launchers for unmanned aerial vehicles.

According to military experts, the Tornado rocket launchers and the operational-tactical Iskanders, if used together, will be able to accomplish combat missions that today require the involvement of significant missile-artillery forces and assets. Perhaps already by 2015, such a bundle will become the basis of the rocket forces and artillery of the Ground Forces. Several dozen Tornado systems have been delivered to the armed forces, and purchases will increase.

Today, the Tornado shows the maximum firing range of 90 kilometers, which is truly an excellent indicator for such systems. For comparison, the Grad shells fly only on 40 km. Unlike its predecessors (Grad, Smerch), Tornado has a satellite guidance system, due to which the probability of a miss is significantly reduced. Rockets hit the point. Tornado can leave the position before the first of the shells fired touches the ground. When the last projectile explodes, destroying the target, the complex itself may already be several kilometers from the place from which the shooting was carried out. All this makes the Tornado really formidable. weaponswhich practically does not know to itself equal.

Today, our rocket launcher systems are known worldwide as much as the Kalashnikov assault rifle. But few people know that after the Great Patriotic War in the Soviet Union they intended to close this line of rocket artillery altogether. Even despite the glory of "Katyusha". The fact is that the "Katyusha" had a significant drawback - a huge dispersion of shells by area. And it seemed that nothing could be done about it.

In 1957, the outstanding designer Alexander Ganichev had great work to revive and defend the idea of ​​multiple launch rocket systems. The Grad system was put into service in 1963. And in 1969, the first combat use of the then secret systems took place during the conflict on Damanski Island. The effect was even more stunning than with the first use of Katyusha in the battle of Moscow in 1941. “Grad” was immediately recognized as the most efficient jet system in the world, besides, it has no analogues.

In addition to high-explosive fragmentation warheads, missiles for the Grad, as well as other MLRS, are also equipped with others. For example, using “hail” you can mine large areas at a distance of several kilometers. A volley from 20 rockets mined kilometer of the front.

There are even missiles designed to interfere with enemy radio communications at the tactical level. A set of eight rockets suppresses radio equipment in the 1,5-120 MHz frequency range. Firing range 4,5-18,5 km. The continuous operation time of the 60 interference transmitter minutes, the range of interference - 700 m.

The illumination rocket provides illumination on the ground of a circle with a diameter of 1000 m from a height of 450-500 m for ninety seconds.

As people who knew Ganicheva recalled, he was a cheerful and hospitable man, not fascinated by friendly feasts. For fun, the designer decided to perpetuate the cost of a half-liter bottle of vodka in the rocket he created. And the first "hailstones" were millimeters in length 2870 - pollitrovka then cost 2 rubles 87 kopecks. In the future, the length of the missiles varied depending on the destination, but did not go far from two eighty seven.

No one could have imagined that, having achieved a world triumph in the production of MLRS, our country would almost lose priority. In the 1990s, the Splav enterprise, where the jet systems were developed, was on the verge of closure. He was saved by the general director and general designer Nikolai Aleksandrovich Makarovets, who actually repeated in new historical conditions post-war feat of his predecessor - Ganichev. He not only managed to preserve the enterprise in incredibly difficult conditions, but to raise it to a new technological level and create that very unique Tornado system.

11 December 1985 of the year, the Smerch third-generation MLRS of the third generation (caliber 300 mm, firing range up to 90 kilometers), which has a control unit on board, which reduced the dispersion of projectiles by three times compared to an unguided rocket, were completed, completing while the accuracy of shooting twice. These systems were actively used during the hostilities in Afghanistan and during counterterrorism operations in the North Caucasus. For the creation of "Smerch" Nikolay Makarovets was awarded the Order of Lenin. He became one of the last gentlemen of this very high Soviet award.

After the collapse of the Union, state orders for Splava were virtually nullified. People stopped paying salaries. By 1994, almost a thousand people left the company - simple workers and very skilled engineers.

Then, on the initiative of Makarovts, work began on the creation of high-tech civilian products based on traditional military technologies. It was possible to organize the production of more than thirty types of civilian products, including fire extinguishing equipment, equipment for processing agricultural products, household electrical products, high-pressure cylinders, medical equipment, instruments for metering water and gas consumption, and printing equipment.

Because Nikolai Makarovets saved a unique enterprise, his engineering and design school, basic technologies and continued working on promising MLRSs, he was given the State Prize of the Russian Federation with the wording "for achievements in the field of conversion." The state could not support the "Splav", but noted those who did, it seemed impossible with their own efforts.

Today, this enterprise is the pride of the Tula defense industry, and working on it is as prestigious as it was in the long eighties of the last century. Yes, and wages have become decent.

Congratulating the head of Splava on the 75 anniversary, Dmitry Medvedev noted that Nikolay Makarovets made a great contribution to strengthening our country's defense capability. “Thanks to your experience and professionalism,” said the Prime Minister, “the famous Tula“ Splav ”, which you have been running for almost 30 years, firmly holds the leading positions in the production of multiple launch rocket systems.”

Nikolay Makarovets was born 21 March 1939, in a small town of Sumy region in a family of teachers. Early childhood was in the years of the war, the occupation. Contrary to popular opinion, being in the occupation of Nicholas himself and his relatives had no effect on career growth. After graduating with honors from high school in his hometown, he entered the Tula Mechanical Institute, from which he graduated in 1962 year. And since then, his fate has been inextricably linked with the defense industry, with the strengthening of the combat power of the USSR, and then of the Russian Federation.

For research work on the creation of engines of intercontinental ballistic missiles Makarovtsu in 1984, the Lenin Prize is awarded. Since November 1985, Makarovets has been working as the general director of the Tula Splava.

Ctrl Enter
Noticed oshЫbku Highlight text and press. Ctrl + Enter
We are
Innovation Day of the Southern Military District: MLRS Tornado-GReports from the militia of New Russia for 7 September 2014 of the year
Military Reviewin Yandex News
Military Reviewin Google News
34 comments
Information
Dear reader, to leave comments on the publication, you must sign in.