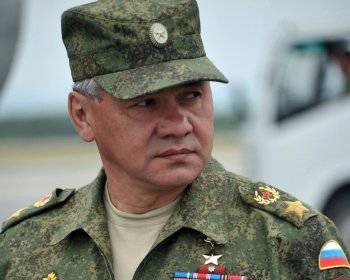 Defense Minister Sergei Shoigu during a working trip to the troops of the Southern Military District arrived on the Crimean peninsula with a group of senior officials of the Russian defense department, where he checked the operation of a number of objects and military garrisons of the Black Sea fleet.

Shoigu discussed with them questions of cooperation in ensuring the development of the social infrastructure of the fleet. In turn, the Crimean and Sevastopol authorities explained to the minister the situation in the region, noting that "the situation is generally calm, people are engaged in planned labor activities."
Ctrl Enter
Noticed oshЫbku Highlight text and press. Ctrl + Enter
We are
Innovation Day of the Southern Military District: Pictures from the Exhibition
Military Reviewin Yandex News
Military Reviewin Google News
32 comments
Information
Dear reader, to leave comments on the publication, you must sign in.