March 25 2014
10
Currently, work is underway in the United States and other foreign countries to create new air defense systems that are designed to deal with a wide range of air targets - from cruise missiles to strategic aircraft aviation. The experience of armed conflicts of the 1990s and 2000s clearly demonstrates that air attack weapons are constantly evolving, new ways of using them are emerging, and their combat capabilities are expanding. All this leads to the improvement of air defense systems, including air defense systems of various ranges. At the same time, the development of modern anti-aircraft missile systems is an expensive pleasure. According to Western experts, one of the ways to reduce costs and increase the effectiveness of air defense systems is to use air-to-air missiles in them. One example of this use of aircraft missiles AIM 120 is SAM SLAMRAAM.


The air defense systems using AIM-120 (AMRAAM) aircraft missiles have become a real separate direction for the improvement of the air defense missile system. This trend has brought together dozens of countries around the world who have thought about replacing the American Improved Hawk air defense system. The first such complex in the middle of the 1990-s was adopted by the Norwegian army under the designation NАСАМS. However, more intensive work in this direction began not so long ago - in the second half of the 2000-s. 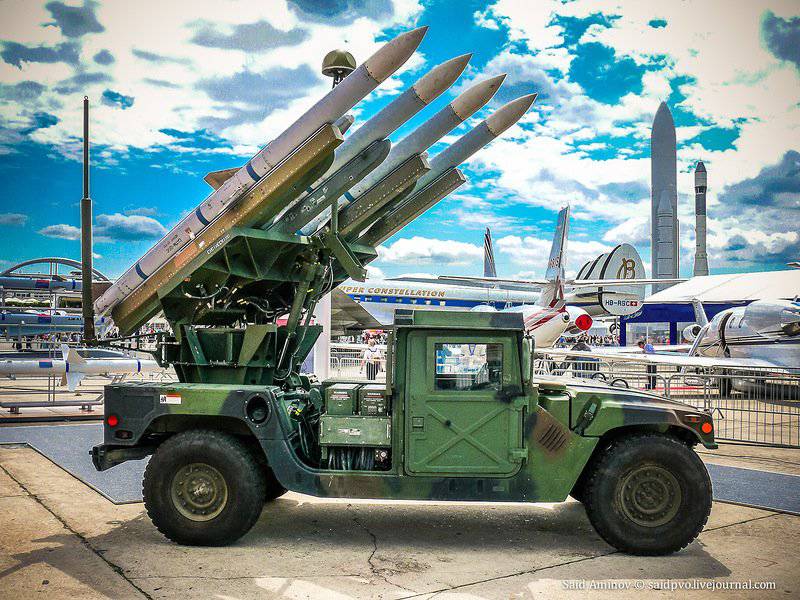 We are talking about the development of various US air defense systems (HAWK-AMRAAM, CLAWS, SL-AMRAAM). At the same time, design and research work was carried out to improve the design of the rocket itself, including giving it the ability to launch from a variety of launchers. For example, 25 March 2009 of the year in the framework of the development of a single launcher managed to execute successful launches of AMRAAM 2 missiles from the HIMARS salvo fire system. In addition, in the United States, work is underway on a radical modernization of the AIM-120 rocket, in order to increase its range when launched from the ground to 40 kilometers, making it an analogue of the MIM-23В rocket, which is used in the Improved Hawk SAM.

In February, the Pentagon signed 2004 with Raytheon, under this contract it was planned to fully develop the SLAMRAAM (Surface Launched Advanced Medium Range Air-to-Air Missile) SAM system, based on the AIM-120 air-to-air missile, for the needs of the land forces. The first tests of the launcher samples took place in November 2005 of the year, and in October 2006 of the year the company announced the completion of work on upgrading the AIM-120 rocket for use in the SLAMRAAM system. The upgraded version of the AIM-120 rocket was equipped with a new self-destruct system, modified software, it is notable for increased efficiency when used against UAVs and cruise missiles.

Tests of the new air defense system began in March 2008. In July of the same year, the US military conducted a series of tests on the interaction of SLAMRAAM air defense systems with other air defense systems, the Patriot and Avenger. 2 June 2009 of the year during tests at the White Sands test site using AIM-120C7 missiles was able to intercept a low-flying maneuvering drone at the ultimate range of destruction. The target designation was made using X-NUMX-x separated radar AN / MPQ-3, which are part of the SLAMRAAM complex. All of them were united into one network, the group was controlled from a single fire control center. 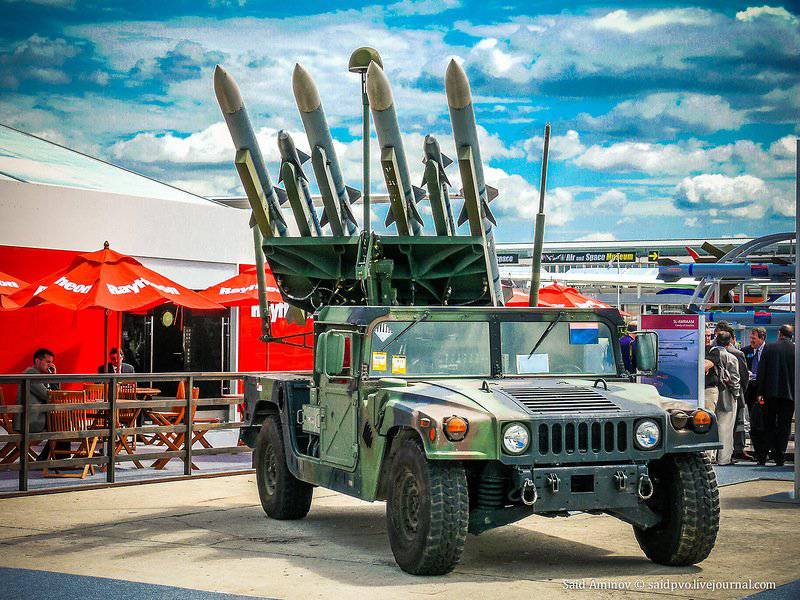 The composition of the SLAMRAAM

SAM SLAMRAAM is a mobile complex mounted on a wheeled chassis, it is designed to provide air defense of troops and infrastructure from various means of air attack of the enemy in all weather conditions, at any time of the day, including the active use of electronic countermeasures by the enemy. The complex is designed to destroy various aerodynamic targets, including UAVs and cruise missiles, at extremely small and small altitudes at a distance of 25 kilometers.

In order to increase the mobility and combat capabilities of the air defense missile system, the combat assets of the complex are placed on light car chassis, in particular, on the basis of the HMMWV army all-terrain vehicle. Tests of the air defense missile system are also being conducted with placement on the base of FMTV, a family of medium tactical vehicles. At the same time, the FMTV family was chosen because of the very high survival rate in combat conditions, the reinforced design, the presence of additional reservations. Apparently, the US military completely abandoned the HMMWV chassis in favor of the FMTV platform. The mass-dimensional characteristics of the SLAMRAAM air defense system provide for the rapid transfer of the complex to the combat areas with the involvement of standard transport aircraft of the C-130 “Hercules” type. 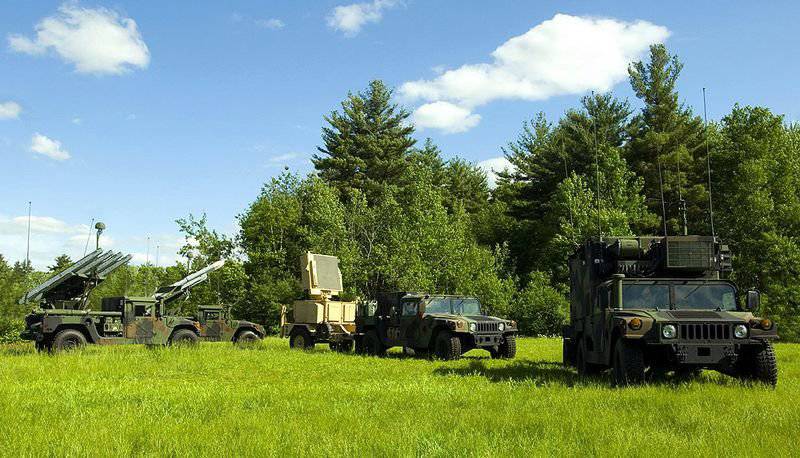 The complex includes a multifunctional AN / MPQ-64 PLC, which was specially developed for the US Army based on the AN / TPQ-36A radar. AN / MPQ-64 is a pulse-Doppler three-coordinate station of circular review, which is designed to detect, track and measure the coordinates of air targets with the subsequent issuance of target designation to the available means of interception. This station operates in the centimeter range of radio waves (operating frequencies 8-10 GHz), the station is able to provide simultaneous tracking of air targets to 60 and simultaneous targeting of them to 3-x anti-aircraft missiles, it also has an integrated interrogator of the friend-foe system. 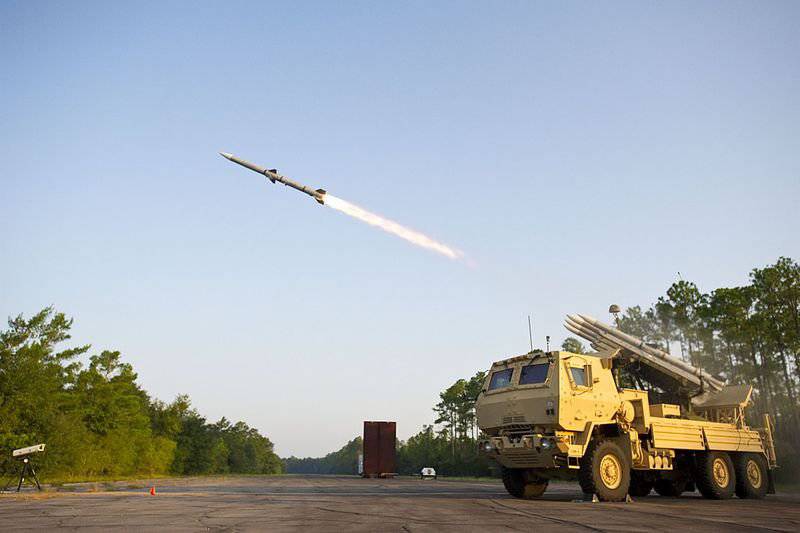 The AN / MPQ-64 radar antenna is a flat phased array (phased antenna array) that is able to provide an overview of the airspace in azimuth - within 360 °, in range - up to 75 kilometers due to the circular rotation of the antenna at 30 rpm, and the elevation angle is due to electronic scanning of the antenna beam in the range from –10 to + 55 °. The radar of the complex creates a needle-type radiation pattern with a low level of side lobes; it is able to select air targets and compress the pulses, change the type and power of the emitted signal. The deployment time of the radar and its preparation for work takes up to 10 minutes. All the necessary radar equipment can be mounted on the base of the trailer, which is towed by the off-road car M988 "Humvee".

The SCP is a fire control center, also mounted on the base of the same M988 "Humvee" chassis. It allows the reception, display and processing of incoming information about the air situation, the state of the systems of the complex, as well as the transfer of target designation to the PU. Combat operation of the air defense complex is provided by operators who are located at automated workplaces equipped with digital high-performance computers. The fire control center SLAMRAAM was created in accordance with the concept of combat in the air defense / missile defense zone, which integrates reconnaissance, command and fire into a single system (Battle space), providing data exchange in real time. At the same time, the air defense system is able to fight, being in a single information space and receiving information about air targets from external sources. If necessary, SLAMRAAM can interact with the air defense systems "Patriot" PAC-2, PAC-3, as well as promising MEADS air defense systems. 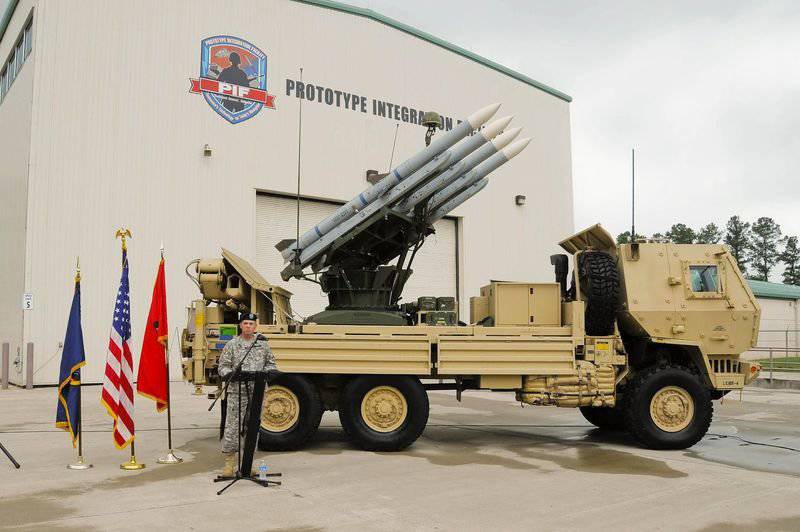 Mobile SLMSRAAM ADMS can carry from 4 to 6 AIM-120 SAM, it is designed for transportation, preliminary guidance and implementation of an inclined launch of rockets. The package of guides was placed on a turntable of circular rotation. At the same time in the vertical plane of the rocket can be aimed at a target to an angle of 70 °. In the stowed position, on the march of the rocket are in a horizontal position. The preparation time of the platform for launching rockets from the traveling position is approximately 1 a minute. To increase the survivability of PU ZRK they can be located at a distance of 25 kilometers from the SCP. In this case, the exchange of information between the PU and the SCP can be established using fiber-optic, cable or digital wireless communication.

SAM AIM-120 - is a solid single-stage rocket, which is made according to the normal aerodynamic configuration. It uses a combined targeting system (command-inertial at the initial and middle trajectory, active radar homing on the target at the final trajectory). Correction commands arrive on board the missile defense system through a special command radio link, the receivers of which are installed in its tail section. The missile warhead can be equipped with both a non-contact and contact radio fuse. The speed of the missile reaches 4 M, it is able to hit targets remote to 25 kilometers. Moreover, in the absence of interference, the estimated probability of hitting a target with one missile is 0,6-0,8. At the moment, the missiles are made in two versions AIM-120B and AIM-120C. The release of missiles is engaged in the company Raytheon in his company in the city of Tucson. According to foreign experts, the cost of one such missile defense is about 390 thousand dollars. 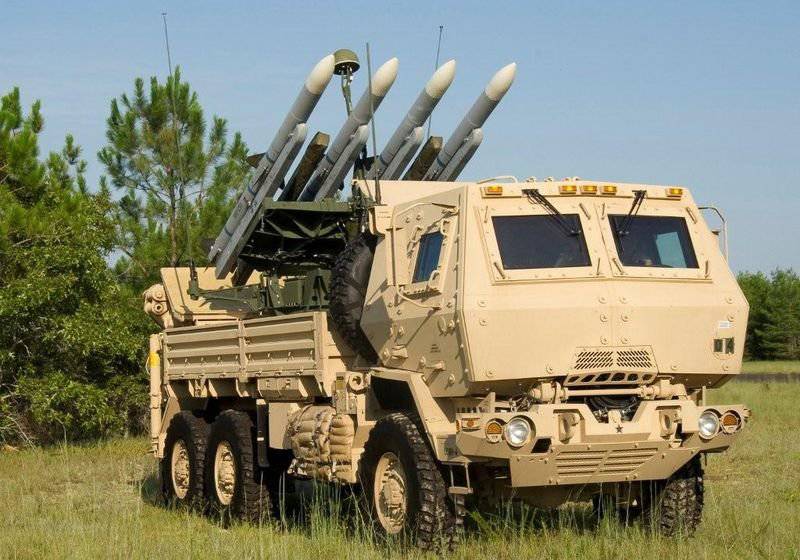 The maximum firing range is 25 km.