March 25 2014
4
Deliveries of new multiple launch rocket systems to Brazilian ground forces continue. As part of the ASTROS-2020 program, Avibras Industria Aeroespacial is building the new ASTROS-2 Mk 6 system. In accordance with the existing agreement, deliveries of ordered combat vehicles must be completed within the next months. The first technique of the new model was transferred to the troops in November last year. 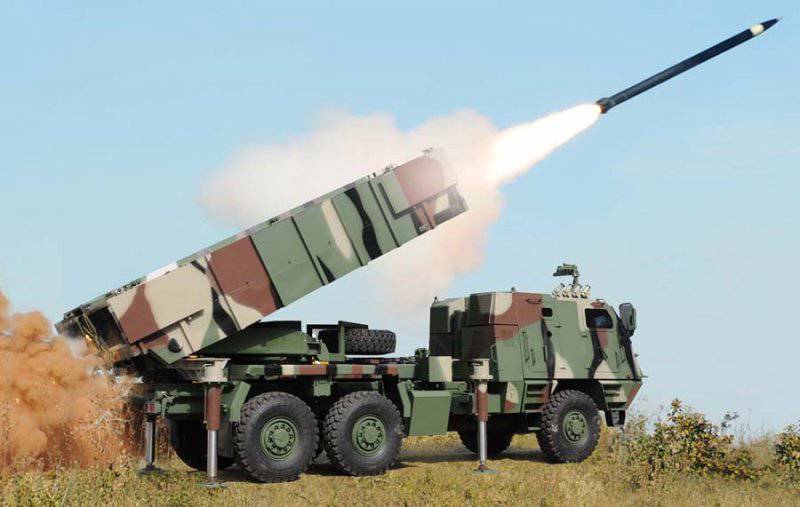 New combat vehicles MLRS ASTROS-2 Mk 6 were created during the program ASTROS-2020. The aim of the program was a deep modernization of the existing equipment with a significant increase in its characteristics. In addition to the development of new technology in the course of the program, it was proposed to slightly change the structure of the subdivisions that the advanced MLRS should operate. An equally important part of the ASTROS-2020 program is the development of a new tactical cruise missile suitable for launch from the MLRS combat vehicle.

The new Brazilian ASTROS-2 Mk 6 multiple rocket launcher system is a further development of the ASTROS-2 family of military vehicles. Over the past three decades, the MLRS of this family has been the basis of the Brazilian ground forces rocket artillery. The development of the MLRS began in the second half of the seventies. The abbreviation ASTROS (Artillery SaTuration ROcket System) was chosen as the designation for the new project. The goal of the program was to create a multiple launch rocket system capable of using several types of ammunition. Various ammunition, as expected, should have provided greater flexibility in the use of new technology.

To ensure high mobility characteristics, all elements of the complex were performed on a single Tatra T815-790PR39 automobile chassis with the wheel formula 6 x6. Machines are equipped with a German OM8 422-cylinder diesel engine manufactured in Germany with 280 horsepower. The use of a unified chassis allowed to provide approximately equal characteristics of all the machines of the complex. The maximum speed of the cars on the highway reaches 90 km / h, the power reserve is 480 kilometers. 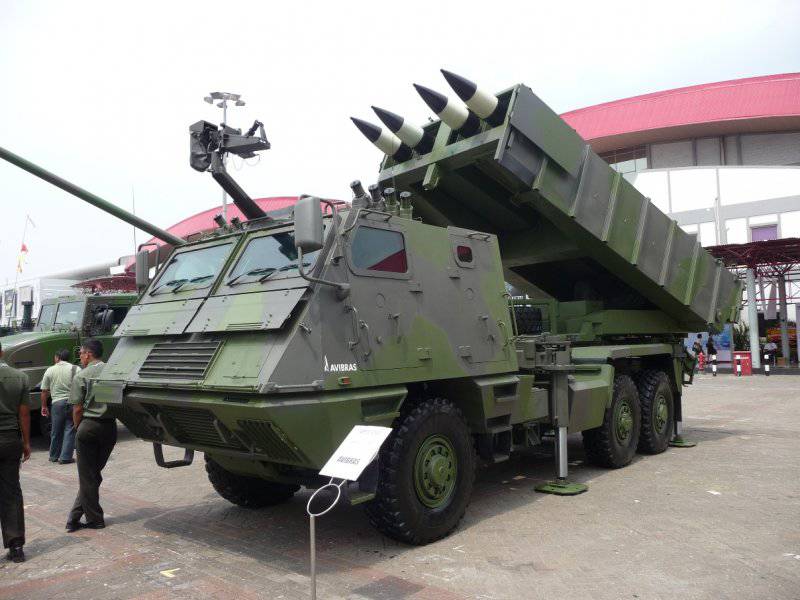 The composition of the MLRS ASTROS-2 includes several different elements:
- AV-LMU. Combat vehicle with universal launcher;
- AV-RMD. Transport-loading machine with devices for the transport of ammunition and loading launcher. Eight transport and launch containers with missiles are transported in the back of the car;
- AV-VVC. Command vehicle with communication and control equipment. The AV-VVA is capable of simultaneously controlling the operation of three ASTROS-2 MLRS batteries;
- AV-UCF. Automated fire control system. The AV-UCF complex is designed to collect information about the location of the MLRS and the target with the subsequent development of corrections for firing;
- missiles of several types. 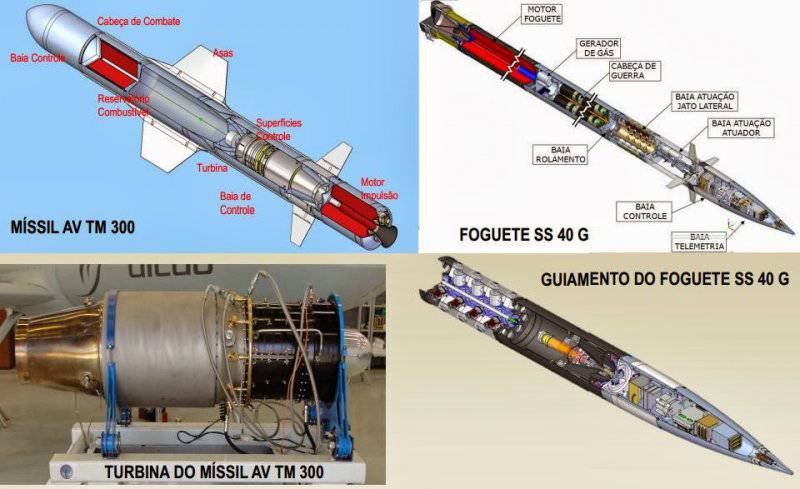 In terms of its general appearance and architecture, the AV-LMU combat vehicle, equipped with a launcher, is almost the same as similar foreign-made vehicles. So, in the front of the three-axle chassis cab is located with the jobs of the driver, commander and gunner. The engine and part of the transmission units are located in the front of the chassis. According to reports, the crew cabin and engine compartment have easy bulletproof booking. In the roof of the cabin there is a hatch above which is placed a large-caliber machine gun designed for self-defense. If necessary, the crew of the car can use smoke grenade launchers mounted on the roof.

Above the rear axles of the chassis is a launcher for missiles. The design of this unit allows you to direct packages of guides in the horizontal and vertical planes. Unlike many other MLRSs, the ASTROS-2 combat vehicle does not have its own guides for launching missiles. Inside the large box casing of the launcher there are only devices for fastening four transport-launch containers with the missiles of the desired type. When firing, the combat vehicle is stabilized with the help of outriggers. 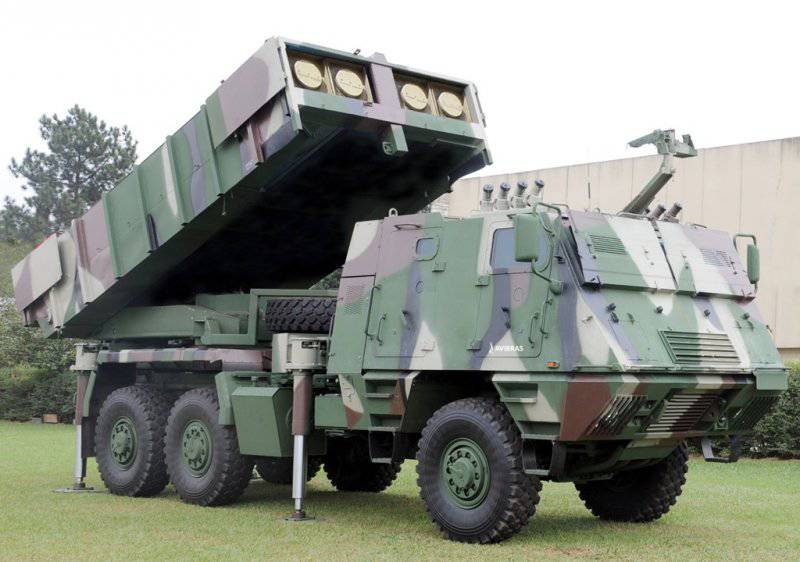 Transport and launch containers for missiles of all types are a box-like structure with the necessary number of tubular guides. A rocket is placed in each launch tube. The amount of ammunition ready for firing depends on their type and size. The initial design envisaged the use of five types of rockets with various characteristics:
- SS-30. Projectile caliber 127 mm and 3,9 meter length. Starting weight - 68 kg. The firing range is from 9 to 30 kilometers. The combat vehicle AV-LMU can simultaneously transport and use 32 missiles of this type;
- SS-40. Rocket length 4,2 meter and caliber 180 mm. Having a launch weight of 152 kg, these shells can fly over a distance of 15-35 km. The launcher simultaneously accommodates up to 16 of such ammunition.
- SS-60. Missile length 5,6 m caliber 300 mm, starting weight - 595 kg. On the launcher can be placed only four of these ammunition. Flight range - 20-60 kilometers;
- SS-80. The dimensions and weight of this rocket correspond to the SS-60, but the maximum flight range is increased to 80 kilometers.

High firing range affected the design of the missiles. To maintain acceptable accuracy at long distances, the designers of Avibras Industria Aeroespacial had to develop an original control system for the new missiles. On-board automation monitors the position of the missile and, if necessary, issues commands to the gas-dynamic steering wheels. The latter, working from an onboard gas generator, provide pitch and yaw control. Thanks to such a control system, it was possible to ensure high firing rates and at the same time maintain sufficient accuracy.

The main means of defeating manpower, equipment and facilities of the enemy are high-explosive fragmentation warheads developed for all types of missiles. In addition, cluster warheads were created for SS-40, SS-60 and SS-80 projectiles with the possibility of carrying cumulative fragmentation sub-ammunition or anti-tank mines. The warhead for the SS-40 rocket contains 20 submunitions, the SS-60 projectile is capable of carrying 65, and the SS-80 - 52 projectiles. 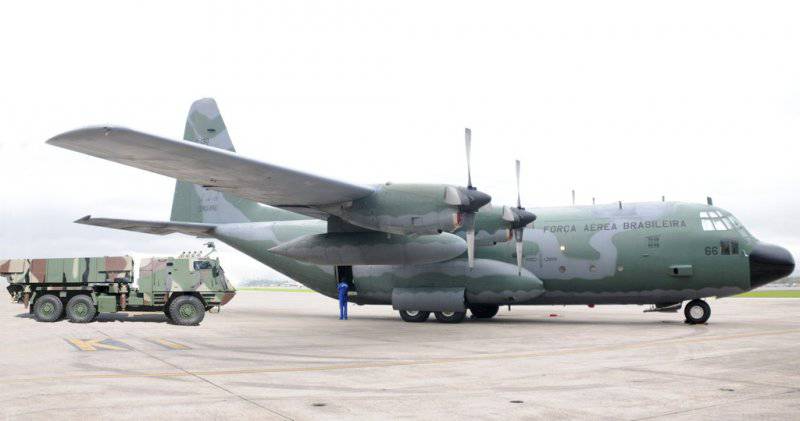 In 2011, Avibras Industria Aeroespacial received an interest-free loan of 45 million reais (about 28 million US dollars) in accordance with a presidential decree. This loan was issued to start work on the new program ASTROS-2020. Under this program, the contracting company was to conduct a series of research and development activities aimed at significantly improving the characteristics of the ASTROS-2 MLRS. The total cost of all project work was estimated at 1,09 billion reais (675 million dollars). The deadline for the completion of the work was the 2016 year.

In accordance with the wishes of the customer, the ASTROS-2020 multiple launch rocket system was to receive updated radio-electronic equipment, as well as several new types of missiles. So, it was required to complete work on the SS-150 rocket project. In addition, the 180-mm SS-AV-40 missile with a guidance system using satellite navigation was to be included in the range of ammunition of the updated MLRS.

In the near future, the ASTROS-2 MLRS must “learn” to perform certain functions of operational-tactical missile systems. Over the past several years, Avibras Industria Aeroespacial has been developing a tactical AVTM-300 cruise missile. A guided missile with a launch weight of about 700 kg must travel at near-sonic speeds to 300 kilometers and deliver an 200-kilogram warhead to the target. The rocket must use a turbojet engine and a combined guidance system. According to available data, the AVTM-300 rocket will use an inertial navigation system to reach the target area, and it is planned to equip it with a satellite navigation system to target the target in the final flight segment.

Last fall, the construction of a pre-production batch of combat and auxiliary vehicles of the upgraded complex, designated ASTROS-2 Mk 6, was completed. After supplying the troops with a sufficient number of new equipment, it will be consolidated into batteries and divisions of the updated squad. In addition to combat and transport-charging and fire control machines, it is planned to introduce an AV-MET meteorological station and an artillery reconnaissance radar machine into batteries and divisions.

The current plans of the Brazilian military department involve the purchase of 49 units of equipment from the ASTROS-2 Mk 6 MLRS. The vehicles of the complex will be assembled into three batteries and transferred to the 6 group of guided and unguided rockets in the city of Formosa. Currently, this unit has three batteries equipped with multiple launch rocket systems modifications ASTROS-2 Mk 3. The last machines ordered will be handed over to the troops in 2018. Simultaneously with the construction of equipment, the 6-I group will be expanded, it will include a training center and service center, as well as several other important facilities. 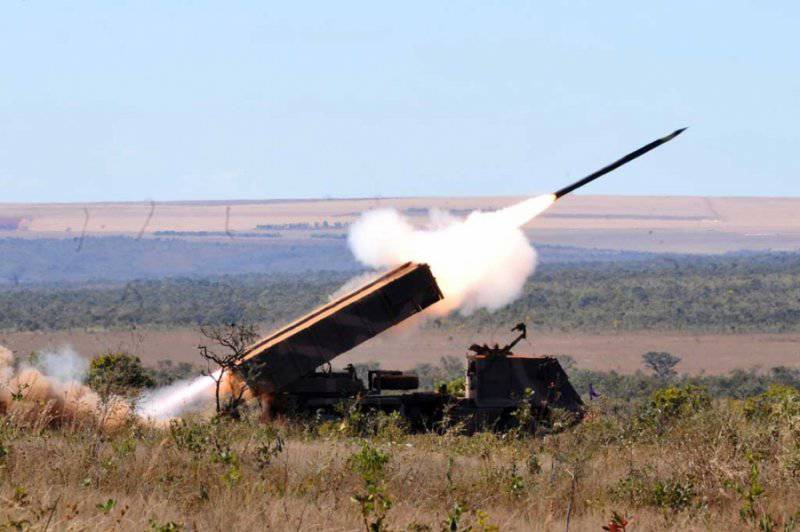 According to some reports, the Brazilian Ministry of Defense plans to not only buy new equipment, but also update the old one. In the foreseeable future, a contract may be awarded to upgrade the ASTROS-2 Mk 3 jet propulsion systems available in the troops to the Mk 3M version.

The ground forces of Brazil received the first MLRS of the new model in 1983. Currently, there are about ASTROS-20 2 combat vehicles in the Brazilian armed forces. Soon after the appearance of a new salvo fire system, orders from foreign buyers began to arrive. For 30 for years, Angola, Bahrain, Malaysia, Indonesia, Iraq, Qatar and Saudi Arabia have become interested in the complex. These countries in total ordered more than two hundred combat vehicles and other equipment from the complex. Saudi Arabia became the largest foreign buyer, receiving 76 units of equipment. 66 machines went to Iraq. In addition, Baghdad acquired a license and the Sajil-60 MLRS appeared soon, representing a modified version of the ASTROS-2 with SS-60 guides integrated into the design. In 2012, Indonesia ordered over 40 machines of the complex.

The interest of foreign customers in the Brazilian multiple rocket launcher system is perfectly illustrated by the fact that from 1982 to 1987 the total value of orders for it exceeded one billion US dollars. After fulfilling the bulk of these orders, in the early nineties, Avibras Industria Aeroespacial was forced to reduce its staff by more than six times: only 900 remained from six thousand employees.

MLRS ASTROS-2 for the first time took part in the hostilities in the mid-eighties. For a certain time several combat vehicles struck the troops of the UNITA organization. The details and results of these attacks are unknown. The most active use of the Brazilian-made salvo fire refers to the “Gulf War”. At the beginning of 1991, the ASTROS-2 systems were used with varying success by the military of Saudi Arabia and Iraq. According to some reports, Iraq attempted to attack the enemy with the help of these MLRS and during the 2003 conflict of the year. 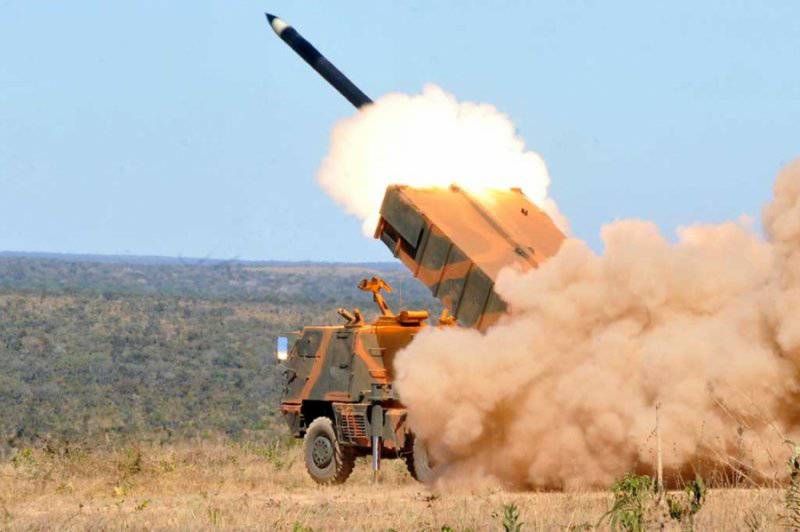 For three decades of operation, the ASTROS-2 multiple launch rocket system has established itself as a versatile weapon system with good characteristics and great flexibility of use, ensuring the performance of various combat missions. The best evidence of this is the export contracts that are still being signed, as well as the ASTROS-2020 modernization program. As is clear from the name of the latter, the ASTROS-2 MLRS will remain in service at least until the next decade.