Ukrainian "power" and the Ukrainian army: mechanisms of provocation and betrayal 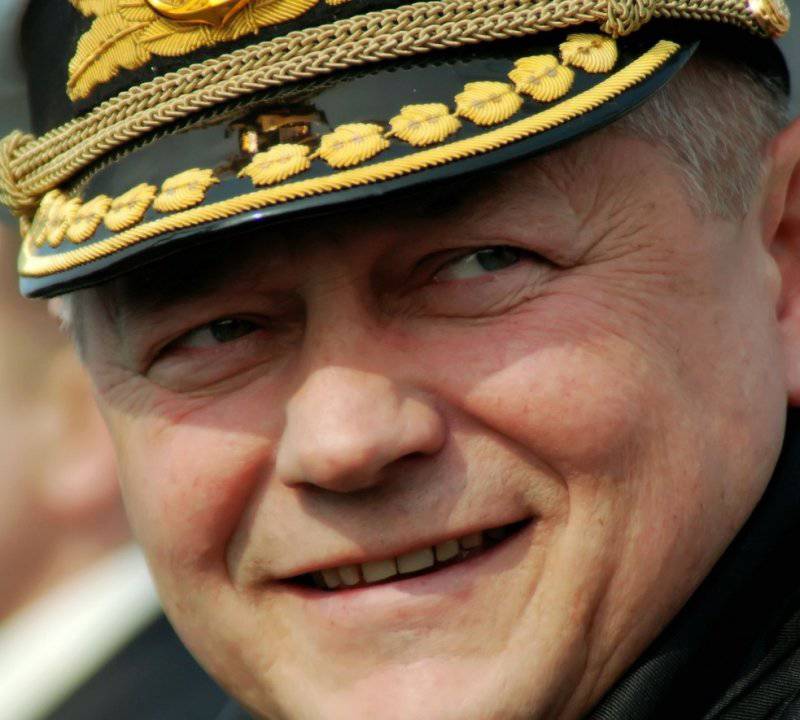 Igor Tenyukh, now the Acting Minister of Defense at the Kiev junta, answered questions in the studio of 1 + 1. Unwittingly, he revealed some plans of the junta and its foreign masters. Speech about that role which servicemen of armed forces of Ukraine in the Crimea had to play. Also from the words of Tenyukh one can make an unequivocal conclusion that the impostors depicting the government and the leadership of the Ukrainian Armed Forces in Kiev will betray people in uniform just like the previous power has already done.

In speeches Tenyukha revealed several important points. For those who do not understand the Ukrainian language, we will briefly outline the essence. The presenter asked the “Minister of the Minister” why those servicemen of the Armed Forces of Ukraine who wish to continue to obey orders from Kiev are forced to act on their own, that is, abandoned by their high command. Tenyukh first assumes that mass appeals to the media on behalf of the Ukrainian servicemen are an information war against Russian special services. And when the deputy commander of the 501-th separate Kerch battalion of the Ukrainian marines comes in direct contact with the television studio, pan Tenyuk says that the battalion has a weak moral situation, the battalion was reorganized from the mechanized, and therefore did not start "...

After such accusations, the deputy battalion commander, who 21 for a day remained in subordination to the Armed Forces of Ukraine, without receiving any orders and trying in vain to contact his command, switches to Russian. The officer actually received an unmerited public spittle in the face from his superior. And the chief who left his subordinates without his own leadership. The officer says that after what Tenyukh said, even those 50 people who were ready to continue their service in the Ukrainian Armed Forces would not go to Ukraine.

It is necessary to clarify the difficulty of the situation in which the Ukrainian servicemen were set up in Crimea by their own command. At least those who, under the circumstances, understood loyalty to the oath as submission to individuals who voluntarily occupied high chairs in Kiev.

On the one hand, all the Ukrainian media and personally Igor Tenyukh in their address speak of Russia's military aggression against Ukraine and the occupation of the Crimea by the enemy. On the other hand, those who remain loyal to Turchinov and oligarchs in the Crimea do not receive orders either for evacuation or for repulsing the “aggressor”. Telephone and radio communications with the General Staff of the Armed Forces of Ukraine and the Ministry of Defense of Ukraine were not violated. But in those rare cases when the commanders still condescend to communicate with subordinates and listen to the question “what should we do?” From them (more often than not, no one simply answers) - it is separated from them by general phrases about duty and loyalty.

The only order given to parts of the Armed Forces of Ukraine deployed in the Crimea can be considered a telephone message (and not a military order or order at all), merely reminding of the existence of the 22 article of the Internal Service Charter! This article governs the use of weapons in peacetime. Other glories, those who consider themselves faithful and. the commander in chief, the command has hinted that it would be time to work out a double salary in March and start shooting at those who live nearby and walk along the same streets. Only not by order, but as if by itself, while carrying guard duty.

Do you know what it is called? This is a real provocation. And betrayal. Those who shout the loudest about “aggression” and “resisting the perfidious attack” do not have the courage to take responsibility for their own lies. Tenyukh and Turchinov try to provoke meaningless bloodshed. And they themselves prefer to remain clean, substituting their subordinates.

As we have already written, bloodshed is necessary for those who seized the central power in Kiev. Kiev junta simply could not get power in the elections, and therefore made a coup. Now she is not able to keep this power without extraordinary circumstances. And therefore she will do everything possible to make such circumstances come. Therefore, in the Ukrainian media is hysterical about the "attack on Ukraine." Therefore, the army is mean and cowardly provokes its own command. Therefore, the provocations will continue.

It should be recalled that even the reunification with the Crimea was not originally planned by Russia. Just as we are not talking about the separation of other areas of the former state of Ukraine. After helping the Crimean self-defense, rendered in order to avoid destabilization of the situation where the Russian Black Sea Fleet is based, where the Russian servicemen and their families live, a referendum was appointed. On 25 May. In the text of the referendum - there is no word about separation! Out of Ukraine is not even considered!

But on March 1, a group of armed officers of the Security Service of Ukraine and private security structures are trying to capture the building of the Ministry of Internal Affairs of Crimea. Military airfield VSU in Kirov takes several sides from Kiev with unknown people. In response, airfields and military units of the Armed Forces of Ukraine in the Crimea are blocked. Vladimir Putin appeals to the Federation Council for permission to use troops. The referendum is transferred from May 25 to March 30. But there is still no word about separation!

Western countries and Kiev putschists accuse Russia of aggression. Putin has telephone conversations with B.H. Obama and A. Merkel. The main demand of Russia was later voiced by the Russian Foreign Ministry — this is the consolidation of Ukraine’s neutral military-political status. The second requirement guaranteeing the fulfillment of the first was democratic elections and a nationwide discussion of the constitution, which ensured the preservation of the rights and freedoms of all citizens of Ukraine, including residents of the south-eastern regions.

These demands were rejected by Western leaders. Civilian provocateurs are trying to penetrate the Crimea. And Tenyukh appeals to the military in the Crimea and sends to the headquarters of the Ukrainian Navy a telephone message capable of provoking the Ukrainian military to the beginning of bloodshed. And as a result of these actions - March 6, the date of the referendum is postponed to March 16, and the point of reunification with Russia appears in it.

Is it worth explaining that the unwillingness of Western leaders to even consider the non-aligned status of Ukraine means that the emergence of NATO (in one form or another) is implied by the organizers of the Ukrainian coup? Is it worth explaining that the graduate of the American Foreign Languages ​​Institute of the US Defense Department (Igor Defense Language Institute) Igor Tenyukh will try to do everything to work out what he studied in the "partner" NATO programs? Is it any wonder that this human is ready to provoke bloodshed in his own country, betraying and substituting his subordinates? And why should the Ukrainian military, who took the oath of allegiance to the people of Ukraine, have to obey the “partner” of another state?

The last president of Ukraine betrayed the police, internal troops and special forces "Berkut". He betrayed only for the fact that they remained faithful to the oath and to the state, and carried out orders, despite the personal attitude towards the persons in power. They fully tasted the fruits of loyalty to the traitors of their country. Now it is the turn of the armed forces of the Ukrainian Armed Forces to try the taste of betrayal

Ctrl Enter
Noticed oshЫbku Highlight text and press. Ctrl + Enter
We are
A great interview with Sergey Lavrov: about Ukraine, Obama and IranWhat you didn't want to know about England
Military Reviewin Yandex News
Military Reviewin Google News
76 comments
Information
Dear reader, to leave comments on the publication, you must sign in.